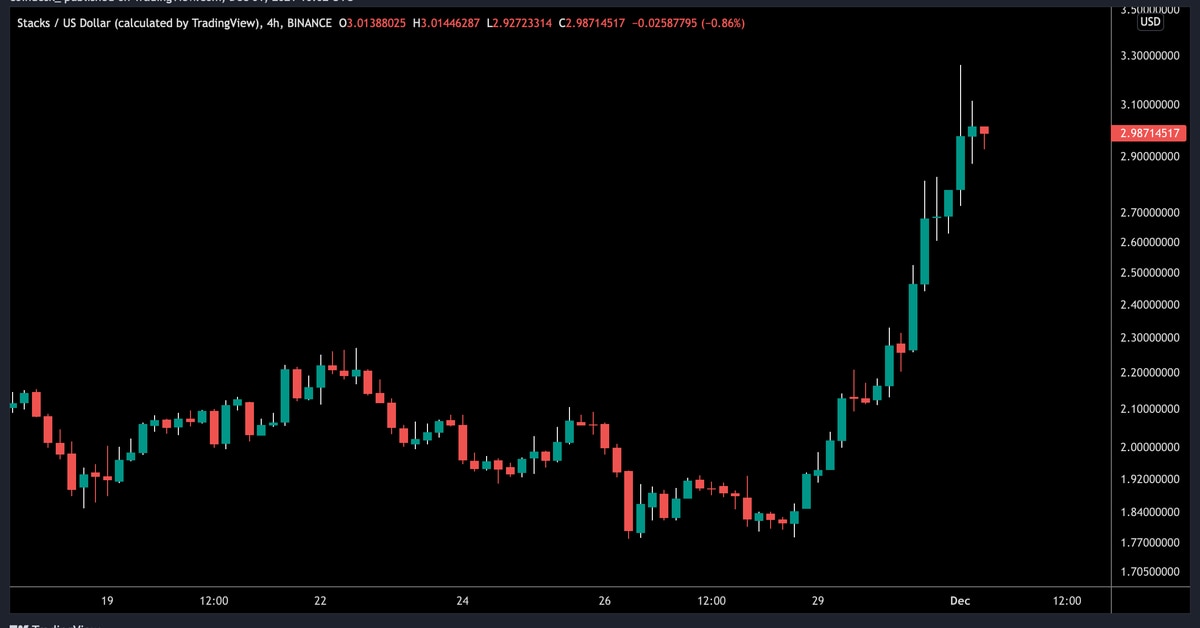 STX, the native token of the Stacks Network dedicated to unleashing bitcoin’s potential as a programmable base layer, is rallying despite lackluster action in the world’s largest cryptocurrency.

Binance data tracked by TradingView shows STX has increased over 50% to $3.30 this week, with the price surging 25% in the past 24 hours.

While the reason for the spike is not apparent, some in the investor community cite bitcoin evangelist Jack Dorsey’s decision to step down as the CEO of Twitter as the catalyst for the move. Dorsey remains the CEO of the payments company Square.

The consensus is that the move away from Twitter will allow Dorsey to focus more on his passion for bitcoin and decentralization.

“If I were not at Square or Twitter, I’d be working on bitcoin,” Dorsey said at Bitcoin 2021, a conference held in Miami in June, according to media reports.

In July, Dorsey said Square would launch a platform for developers to create “decentralized finance” projects built on bitcoin. At Twitter, Dorsey spearheaded Bluesky – a project aimed at turning the social media company into a decentralized protocol. According to Platformer’s Casey Newton, Twitter’s new CEO, Parag Agarwal, has been among executives most focused on cryptocurrencies and central to chasing Dorsey’s dreams.

Co-founded in the Princeton computer science department by Muneeb Ali and Ryan Shea in 2013, Stacks Network is a layer 1 virtual network facilitating smart contracts that settle on the Bitcoin blockchain. The STX token acts as a fuel powering smart contracts on the network.

While bitcoin is the most popular cryptocurrency, its blockchain was not developed to facilitate smart contracts, unlike Ethereum. Thus, Stacks Network brings added value by enabling smart contracts on Bitcoin’s blockchain with programming language Clarity.

Among other factors, the impending Stacks improvement proposal SIP-012 upgrade to boost scalability and the planned release of the CrashPunks non-fungible tokens collection on Stacks on Dec. 12 may be powering the STX token higher.

According to the official blog, the SIP-012 upgrade could boost the network capacity by as much as 10-fold.

“Given the number of launches and the ongoing growth of the network, this would be a significant win for many Stacks builders,” Stacks Foundation’s Mitchell Cuevas noted. “Stacks core developers have bundled these possible adjustments into SIP-012.”

While STX has decoupled from bitcoin, its bullish momentum may slow if the larger cryptocurrency faces selling pressure. Bitcoin was last trading unchanged on the week near $57,000.

Bitcoin’s immediate prospects depend on investors’ expectations for the U.S. Federal Reserve’s policy tightening. According to Bloomberg, money markets are back to pricing faster unwinding of stimulus in 2022 in the wake of Fed Chairman Powell’s hawkish lean on Tuesday.

A faster unwinding of stimulus, if any, may weigh over asset prices, including bitcoin, which is still seen as a risk asset.

“Bitcoin’s correlation with S&P 500 increased amid the general market sell-off, strengthening our hypothesis that more sophisticated investors are currently not looking at bitcoin as a safe-haven asset, but as a risk-on asset,” Arcane Research said in a weekly note published Tuesday.