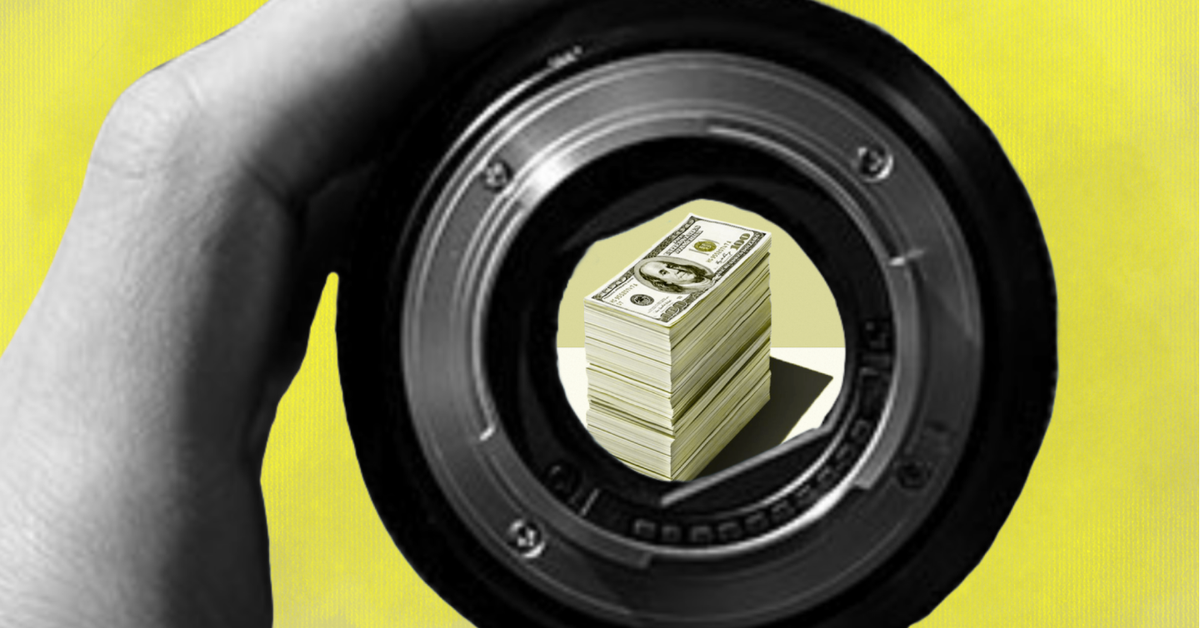 The Future of Money: 20 Predictions

Will bitcoin kill the U.S. dollar? Will money become tokenized? How do we use cash?

Since we don’t have a crystal ball, we reached out to some of the brightest minds in crypto to share their predictions on “the future of money.” It’s a dead-simple question. The prompt was open-ended, allowing them to interpret the question in any way they see fit … and the results are fascinating.

Contradictions abound. Some are hopeful, some are sinister, some are bullish on crypto, some are skeptical and some envision a world very different from today.

Just a hint of the possible futures: Balaji Srinivasan foresees a “DeFi matrix” that will ultimately be “a check on the power of central bank currencies.”

This article is part of Future of Money Week, a series exploring the varied (and sometimes weird) ways value will move in the future.

Others see a world that is fully tokenized, or as Arca’s Jeff Dorman predicts, “every company in the world will have a token in its capital structure.” Bitcoin maximalist Erik Voorhees suspects that fiat currencies will “self-immolate.” And, in perhaps a chilling vision, central banker Marcelo Prates imagines a future currency “issued by a group of six big tech firms known as the ‘six sisters,’ and this currency gobbles up the world.”

There’s only one thread that cuts through all 20 predictions: Whatever the future of money holds, it won’t be boring.

In the old days, countries whose currencies collapsed would dollarize – they’d import dollar bills and start using that as money. Ten years from now, that will be a relic. Countries will dollarize using permissionless stablecoins, and central banks around the world will ultimately fear crypto-dollarization as a check against runaway inflation.

2. Crypto and fiat will coexist

Crypto and the top fiat currencies continue to coexist. We might see a consolidation in smaller national currencies as people find it easier to access USD via public blockchains.

3. Everyone becomes a programmer

Digital objects are becoming as commonplace as emails, and programming literacy is akin to reading literacy. I expect in the coming years people will be creating hundreds of tokens a year, all of which will have price discovery, be tradable and have multiple financial attributes.

Similarly, being able to write, read and interact with smart contracts that make this possible will be a skill that increasingly more people have to participate in the economy. This means that money will become less abstract – some number in some box – and far more tied to our digital labor and self-expression.

4. The world adopts the ‘DeFi matrix’

The DeFi matrix may be to the 2020s what the social graph was to the 2010s. Once every asset can be represented in a digital wallet – bitcoin and ethereum, yes, but also CBDCs [central bank digital currencies], stocks, loans, bonds, etc. – all these billions of assets will trade against each other every second of every day around the world.

This table of pairwise trades is what I call the DeFi matrix. Some of the cells in the DeFi matrix, like BTC/USD, have tremendous liquidity across many order books. Others, like a recent NFT [non-fungible token] vs. a new token, may only have what an AMM [Automated Market Maker] can give them. But all financial markets can be reduced to sub-matrices of the DeFi matrix. The traditional stock market will be CBDCs vs crypto equities. The forex market will be CBDCs vs CBDCs. And the fiat/crypto markets will be BTC/USDC and the like.

Srinivasan then elaborates on the implication of the DeFi matrix, which leads to our next prediction:

5. The DeFi matrix spurs competition and becomes a check on central banks

Nations will only be able to mandate adoption within their borders, and even then people may only retain the minimum balance of a surveillance currency. They’ll use digital wallets to select assets with programmability, privacy, possibility of upside and predictable monetary policy over locked-down assets that promise none of these features. As such, we are entering an age of global monetary competition.

“Within a decade, fiat currencies will be in severe decline, brought on by their own self-immolation, and hastened by the existence of sound, market-based alternatives.”

It’s fashionable for futurists to predict the demise of physical cash, but digital infrastructures are insecure in a world in which climate change is bringing ever more extreme weather events. The fact that “cash doesn’t crash” means that it is far more resilient than digital money, and it will be around for a long time into the future. Digital is massively overrated.

-Brett Scott, author of “The Heretic’s Guide to Global Finance: Hacking the Future of Money.”

And in a bit of contrarian spice, Scott also offers the next two…

Crypto tokens like bitcoin do not fundamentally challenge the monetary system, given that they depend on the monetary system to give them a price, but that price does enables them to be counter-traded (the process of swapping one thing for another via their monetary price). There is a new age of countertrade emerging, but crypto enthusiasts keep mistaking it for a new age of money.

New-wave IOU and rippling credit systems begin to take off. The crypto mainstream has perpetuated some pretty regressive ideas about money for the last 10 years by fixating on a commodity paradigm, but by far the most interesting new experiments in money involve finding new ways to create horizontal networks of promissory IOUs between people.

The “tokenization of everything” is rapidly changing how we perceive money and wealth, spurring the creation of digital micro-economies. NFTs are the first killer app. The battle for the future of money is on, and my money is on Web 3.0 innovations, creating opportunities for many, not just a few.

Money is just a representation of the world’s assets – our energy and our vision. The future of money is the future of how we put this planet’s immense resources to work. Putting money on the blockchain, making it programmable and enabling it to work with other services and assets are the keys to giving us choice and power to put our money to work.

Whether it’s investing in solar farms or paying for education, there are still so many great projects that are not being done for lack of investment. With programmable blockchain-based money, we can take our own assets and put them to work for everyone’s benefit.

I believe every company in the world will have a token in its capital structure in the next five to 10 years. These tokens will be hybrid securities – part loyalty/member rewards program and part quasi-equity, in that the token will have a utility within a company’s ecosystem (rewards) and will also have financial value as the company grows revenues (pass-through dividends).

All consumer-facing businesses will benefit from engaging their customers with a token – from Starbucks, Delta Airlines, Netflix, and Disney to small local companies like your barber, gym and corner bodega.

It’s 2031 and over 6 billion people use BTAs in their daily transactions, a digital currency issued by a group of six big tech firms known as the “six sisters.”

2. Blockchain-enabled easy to use applications to facilitate custody, trade for tokenized forms of money.

3. Medium of exchange will fix itself over a basket of other currencies (could be ETH, BTC, USD, EUR, etc.), sliding away from the single USD currency around that point in time

Next, in a clever hedge, Dovey Wan gives us two predictions, one dystopian and one optimistic. (The reader can decide which is which.)

Programmable fiat monetary policy and CBDC will make arbitrary seizure and irrevocable confiscation within a few lines of codes.

Mordor central banking system does not create wealth, only the perception of wealth. The “Great Concentration” of fiat wealth and “Great Redistribution” from fiat to crypto wealth are happening in parallel this decade.

Today, it’s often said that money has three primary functions: a store of value, a medium of exchange and a unit of account. But more than that, money is often seen as a reflection of how much you are worth to this world and how much that coffee is worth to you. Money is value. But as I look around, I see the concepts of money and value becoming less and less intertwined.

Let me paint a picture that might or might not come to pass. You have a bunch of centralized services and islands connected by decentralized blockchain rails… I think a lot of services are going to need to still be isolated and centralized because that’s what’s most computationally efficient, but the network as a whole could be largely decentralized.

You can move between any service easily on standardized blockchain rails, which would be extremely valuable. If there’s an easy, standardized way, in 30 seconds, to move assets from one platform to another – that doesn’t exist outside of crypto right now, and it’s a huge hindrance.

Payments could be effectively instant on blockchain rails. This is true of money, and that’s true of assets as well – assets get tokenized … Payment apps and in-store objects support that, [and that’s] probably happening largely over mobile. I think that is something which would be in many ways more efficient, and easy to scale and grow, than the system we have today. I’d be pretty excited to see something like that.

My prediction for the future of money is that it’s going to get a lot weirder. It will be more closely tied to, or allow a greater expression of, our identities and our individuality. It will reflect our relationships in both the physical and digital worlds.

It’s going to accelerate globalization in bringing together people with similar values across borders – and tying them together with financial incentives and an identity that is intensified and deepened with financial value involved. And all that is going to shake up the traditional world of governments, different legal jurisdictions and different local currencies.