As Honolulu sprawled into new suburbs west of Pearl Harbor over the last two decades, city planners proposed an ambitious rail transit line that would sweep riders 20 miles into downtown. The $4 billion estimate in 2006 was hardly cheap, amounting to $200 million per mile.

The cost escalation since then has been an engineering marvel all its own. Concerns over Native Hawaiian burial grounds stalled early construction, then problems with welding and cracks in the tracks appeared. Earlier this year, engineers realized that in some sections, the wheels were a half-inch narrower than the rails. Order new wheels? Tear up the tracks?

The launch dates slipped forward and the cost estimates crept upward — at latest count, $11.4 billion, with a target completion date of 2031.

Honolulu’s tribulations are far from a lone cautionary tale. To the contrary, they signal the kind of cost overruns, engineering challenges and political obstacles that have made it all but impossible to complete a major, multibillion-dollar infrastructure project in the United States on budget and on schedule over the past decade.

As the nation sets out on a national spending spree fueled by the $1.2 trillion infrastructure bill signed by President Biden this month, the job ahead carries enormous risks that the projects will face the same kind of cost, schedule and technical problems that have hobbled ambitious efforts from New York to Seattle, delaying benefits to the public and driving up the price tag that taxpayers ultimately will bear. 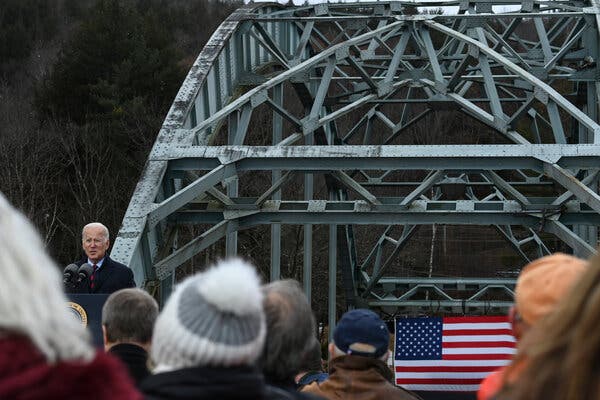 President Biden at a bridge over the Pemigewasset River in Woodstock, N.H., this month. The infrastructure package that he signed into law contains $1.2 trillion to help fix roads and bridges. Credit…Kenny Holston for The New York Times

American cities and states were long renowned for some of the greatest bridges, water systems and freeways in the world, but challenges have grown more potent. Agencies have less internal technical talent. Legal challenges have grown stronger under state and federal environmental laws. And spending on infrastructure as a fraction of the economy has shrunk, giving local agencies less experience in modern practices.

The $1.2 trillion package has bold goals, directing the majority of $500 billion to highways, $39 billion to urban transit, $65 billion to broadband projects and $73 billion to electrical grids, among other items. The nation’s busiest passenger rail line, Amtrak’s Boston-to-Washington corridor, would get the biggest slice of a $66 billion rail package. The infrastructure spending plan is unlikely to rescue some existing infrastructure projects that are bogged down with problems.

And even with the new infusion of money, analysts say it will be tough to ramp up infrastructure progress as swiftly as envisioned in the current timetable.

The construction industry is facing sharply growing costs for steel products, up by 142 percent in the last 12 months, and other key materials. Shortages of skilled labor are worsening, exacerbated by Covid-induced retirements.

“A lot of people would like to see the money quickly spent,” said Anirban Basu, chief economist of Associated Builders and Contractors, a construction industry trade group. “They are going to look at the costs they are facing and extend out the projects because of constraints.”

Bent Flyvbjerg, a professor at the University of Oxford who has studied scores of projects around the world, found that 92 percent of them overran their original cost and schedule estimates, often by large margins — in part, he said, because cost estimates are “systematically and significantly deceptive.”

“A lot of projects are not delivering what they promised to deliver,” he said.

In Baltimore this month, Mr. Biden lamented that U.S. infrastructure was once rated the world’s best and now, “You know what we rank in infrastructure? Thirteenth in the world.”

In some cases, U.S. construction costs are higher than those in Western Europe and democratic nations in Asia, according to an upcoming University of California, Berkeley, analysis, said Ethan Elkind, a law professor and director of the school’s climate program.

“It is a lot harder to build projects here, and we are not as skilled at doing it,” he said.

When California voters approved a bond in 2008 for a high-speed rail system from Los Angeles to San Francisco, the project was supposed to cost $33 billion and be completed by 2020. The job is now projected to finish in 2033 for $100 billion, though those estimates are dated and there is an $80 billion funding gap.

Lengthy delays have affected the East Side Access extension of the Long Island Rail Road.Credit…Jeenah Moon for The New York Times

The ambitious project, the nation’s most serious effort to build a full-scale bullet train, has encountered serious delays because of land acquisition issues, environmental litigation, permit setbacks, employee turnover and significant design changes. The problems have triggered political infighting even with the Democratic supermajority in California.

Lengthy delays have also affected New York’s East Side Access extension of the Long Island Rail Road, which is supposed to cut up to 40 minutes off commuter time on the last segment, from Queens to Grand Central Station, with up to 24 trains per hour at peak times.

Conceived more than a half century ago, with a construction contract awarded in 2006, that project was supposed to be completed by 2011. Early estimates put the cost at $2.2 billion, then $4.3 billion in 2006 and $6.4 billion in 2008. The Metropolitan Transportation Authority now envisions completion in December 2022 at a cost of $11.1 billion. Design changes, underground tunneling problems and coordination with other agencies were some of the factors in the delays and cost increases.

One of the nation’s most important environmental infrastructure projects, and perhaps the most technically difficult one, has been underway in Central Washington State for decades at the former Hanford nuclear weapons site. Since 2013, major construction has been stopped at two partially built plants to treat and vitrify 56 million gallons of radioactive sludge.

When an independent review in 2015 found 362 significant design problems, the Energy Department announced a 17-year delay and estimated the system would become fully operational in 2036.

The problems included the failure to anticipate the potential for an earthquake to damage equipment and the possibility that the chemical processes to separate high-level radioactive materials could cause explosive hydrogen gas to form.

The delays have pushed the Energy Department to adopt an alternative that would start treating low-level waste by the end of 2023, Washington State officials said. The last cost estimate for the plant was $17 billion, up from $12.3 billion in 2013 and about $4 billion 20 years ago.

The rail project in Hawaii was intended to relieve congestion on a par with Los Angeles along the urban band from East Kapolei to the core of Honolulu.

The Honolulu Authority for Rapid Transportation believes it can address the latest track problems by welding certain sections of track and later replacing wheels to match the track size, said a spokesman, Harry Cho.

The setbacks that resulted in delays — archaeological surveys, labor costs, utility relocations and land acquisition — are the kind of challenges that plague nearly all major infrastructure projects; the common mistake is in not planning and budgeting for them, said Joseph Schofer, a Northwestern University civil engineer and originator of the “Infrastructure Show” podcast.

Workers inspect a section of a train at an operations center of the Honolulu Authority for Rapid Transportation in Pearl City, Hawaii.Credit…Tim Rue/Bloomberg via Getty Images

“You can’t say these were an accident,” he said of most cost overruns. “We could do better. We haven’t gotten honest estimates in a lot of cases.”

Mr. Schofer said many projects are justified by estimating that future benefits will exceed costs, but when the costs go up astronomically, no one recalculates the ratio.

In a candid admission of how the political world operates, Willie Brown, the former mayor of San Francisco, once dismissed cost overruns on a transportation hub intended for the bullet train.

“In the world of civic projects, the first budget is really just a down payment,” he wrote in a guest newspaper column in 2013. “If people knew the real cost from the start, nothing would ever be approved. The idea is to get going. Start digging a hole and make it so big there’s no alternative to coming up with the money to fill it in.”

U.S. Transportation Department officials declined to comment for this article, but Biden administration officials have said the new infrastructure package will redress decades of neglect and will boost the efficiency of the American economy, address climate change and provide immediate jobs in construction.

Mr. Flyvbjerg, the Oxford professor, said infrastructure keeps getting more expensive at a time when many products, such as televisions, refrigerators and computers, get cheaper or better each year.

“Big infrastructure is becoming cost prohibitive,” he said, a problem he blames on institutional sclerosis at government agencies that keep repeating mistakes and choose infrastructure projects that are unlikely to succeed.

The mistakes, he said, include a lack of transparency to the public, flawed contracts that put government agencies at the mercy of contractors and a failure to attract enough private investment to bear some of the project’s risk.

The new infrastructure law, he said, does little to change the outlook.

Ronald N. Tutor, chief executive of Tutor Perini, a California firm that is building some of the nation’s largest projects, said the industry has done a good job of advancing and completing projects that by their nature are complex and unpredictable.

“All the major projects have cost and schedule issues,” he acknowledged. “The truth is these are very high-risk and difficult projects. Conditions change. It is impossible to estimate it accurately. That is naïve.”

The transit system in Honolulu is estimated to cost $11.4 billion by the time it is scheduled to be completed in 2031.Credit…Cathy Bussewitz/Associated Press

The infrastructure law takes some initial steps at reforms, including codifying a Trump executive order to name a lead federal agency for each project, reducing the number of chefs in the kitchen, said Diana Furchtgott-Roth, who formerly oversaw Transportation Department research and technology and now is a George Washington University adjunct professor.

A key factor is the amount of time federal agencies spend to review environmental reports and issue records of decision, she said. In many cases, she said, projects are put on hold for years, while agencies review voluminous documents.

Mr. Biden also named a task force to carry out the infrastructure program with an aim to “invest public dollars efficiently, avoid waste and focus on measurable outcomes for the American people.”

The environmental review process has become so complex, in part to defend against inevitable lawsuits, that neither state agencies nor federal departments can write and review the documents without teams of outside consultants.

Most of the spending under the $1.2 trillion infrastructure plan has been previously authorized, but the law includes $550 billion of new money to be spent in as little as five years.

Federal, state and local agencies were working their way through $270 billion a year in authorized spending in 2019, before the pandemic hit. An attempt to bump that up by an additional $100 billion annually, as envisioned, represents a 37 percent jump that may not be possible to achieve, industry analysts warn.

“It is a very big bump,” said Ken Simonson, chief economist at Associated General Contractors of America, which represents major infrastructure builders. “My guess is that we are not going to see $550 billion spent in the first five years.”

Tags
New Over Per Said Time

This Fire-Loving Fungus Eats Charcoal, if It Must