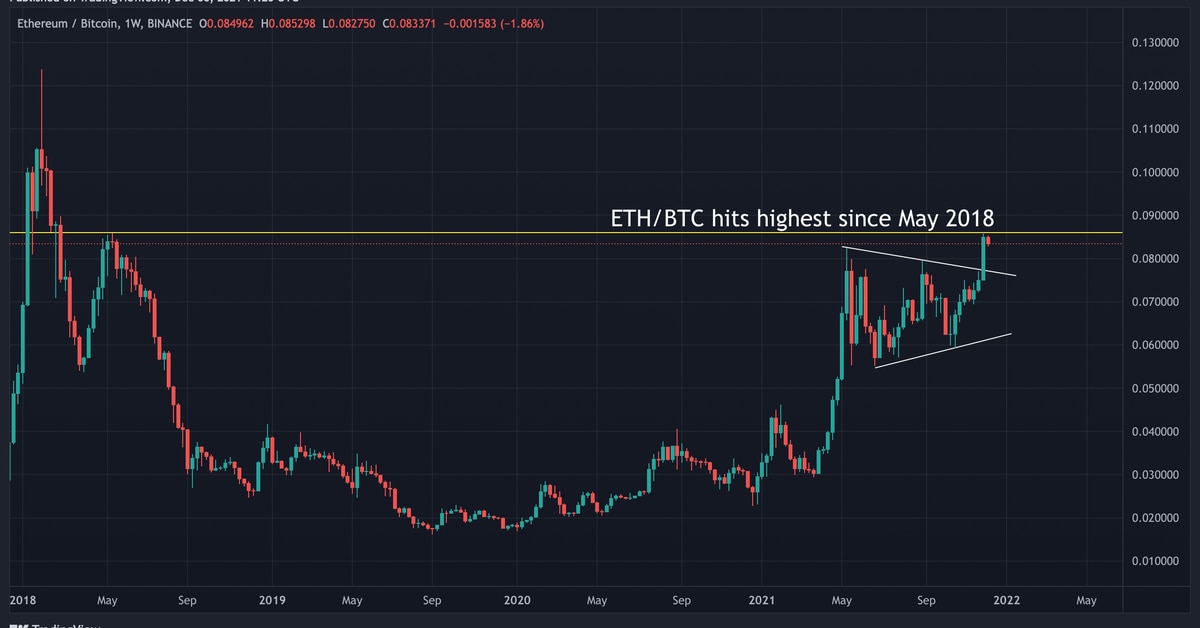 While bitcoin tanked last week, pulling the broader crypto market lower, there was one bright spot. The ether-bitcoin (ETH/BTC) ratio rose 13%, reaching a 3.5-year high and registering its best weekly performance since May.

The move was unique. Historically the pair has rallied during market-wide bull runs characterized by buying frenzy in ETH and other alternative cryptocurrencies.

Several factors, including the Ethereum blockchain’s EIP-1559 upgrade implemented in August, appear to have helped ETH/BTC chalk out gains in a risk-off environment. Let us discuss each one.

Since inception, bitcoin has been widely touted as an inflation hedge like gold and has closely tracked inflation expectations over the past 18 months. The U.S. 10-year breakeven rate, which represents how the market foresees long-term price pressures, has eased to 2.43% from 2.76% in the past two weeks, while money markets have brought forward the timing of the first Fed rate hike to mid-2022.

So, it’s no surprise that bitcoin ended the week with a double-digit loss versus ether’s 2.3% drop.

According to analysts, ether’s newfound deflationary asset credentials and impending transition to the proof-of-stake mechanism, dubbed ETH 2.0, may have helped the cryptocurrency stay relatively resilient.

“One of bitcoin’s main value propositions over ETH has been its monetary policy. However, after the London upgrade (and specifically EIP-1559), many perceive ETH as having a sounder monetary policy,” Alex Svanevik, CEO of blockchain data company Nansen, told CoinDesk in a Telegram chat.

EIP 1559, the Ethereum Improvement Proposal implemented on Aug. 5, has brought deflationary asset appeal by introducing a mechanism destroy, or burn, a portion of fees paid to miners. That puts ether’s monetary policy at odds with the Fed’s several years of continuous fiat money printing.

While bitcoin’s programmed code known as reward halving also reduces the pace of supply expansion by half every four years, EIP-1559 has tied the amount of ether burned to actual network usage. Ethereum, the world’s largest programmable blockchain, dominates decentralized finance (DeFi) and other booming crypto sub-sectors like gaming and non-fungible tokens (NFTs).

Since activation, Ethereum’s blockchain had burned more than 1 million ether worth $4.4 billion, leading to a net supply reduction of 68%, according to data source Watch The Burn.

According to Svanevik the market is excited about the Ethereum mainnet’s “merge” with the beacon chain proof-of-stake system scheduled for next year. The merge will mark the end of the proof-of-work mechanism and the transition to proof-of-stake.

According to analytics firm IntoTheBlock’s Lucas Outumuro, ether issuance is expected to drop 90% following the merge as it will no longer be distributed to miners. Further, there is consensus that the merge will make Ethereum faster and more efficient.

Stablecoins have to a large extent taken over bitcoin’s role of being a base currency for other cryptocurrencies, Svanevik says.

In other words, stablecoins like tether with values pegged 1:1 to the U.S. dollar are now used to fund alternative cryptocurrency (altcoin) purchases. That’s a change compared with pre-2020, when bitcoin served as a gateway to altcoins. So, the unwinding of long altcoin trades now puts a bid under stablecoins. Previously, it would bring demand for bitcoin, helping the cryptocurrency outperform other coins.

While it may be too early to call ether the crypto market’s new haven, the token powering Ethereum’s blockchain may continue to outperform bitcoin as the focus remains on macroeconomic factors.

“We expect that cryptocurrencies will continue to be driven by the appetite for risk in other markets,” said Matthew Dibb, COO and co-founder of Stack Funds. “New COVID variant concerns, as well as tapering, have been a major concern here, and we see this being a predominant theme for the remainder of Q4.”

Technical charts indicate that the path of least resistance for the ETH/BTC ratio is higher.

“From a fundamental standpoint, Ethereum has DeFi, NFTs and metaverse going strong for itself while relatively Bitcoin only had the taproot upgrade. From a behavioral standpoint, NEW money has started to flow into ether from bitcoin,” MintingM added.

The People’s Bank of China (PBOC) said early today that it would cut banks’ reserve requirement ratio by 50 basis points, releasing 1.2 trillion yuan ($188 billion) to boost slowing economic growth. The announcement is yet to lift spirits in the crypto market.

What Does the U.S. Owe Separated Families? A Political Quandary Deepens