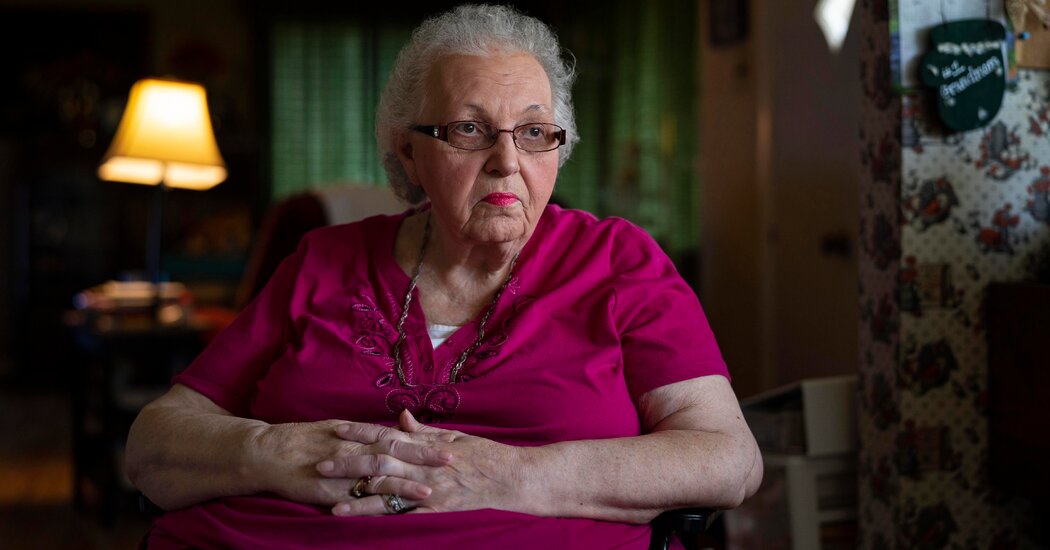 GREENSBURG, Pa. — At 32, Ryan Walsh has never voted in a presidential election. He didn’t identify with either party before this year. But in the spring, he registered as a Republican, and he plans to cast a ballot in person on Tuesday for President Trump.

“I’m petrified of Joe Biden and Nancy Pelosi getting power and doing all this stuff that’s going to totally destroy the economy,” said Mr. Walsh, who works for a social services agency of state government.

He cited a string of proposals that trouble him — broad tax increases, the Green New Deal, “Medicare for all” — that Mr. Biden has said he opposes. Mr. Walsh does not believe him.

Voters who didn’t show up in 2016 are Mr. Trump’s “secret weapon,” said Mr. Walsh, who lives outside Pittsburgh and works in Westmoreland County, an exurb where the Trump campaign is indeed hoping to expand its margin compared with 2016. Mr. Walsh called polls showing the president trailing “a joke,” adding, “He will do nothing but gain in the areas he won last time.”

With recent electoral history and current polls suggesting that Democrats are likely to make gains in the vote-rich suburbs nearly everywhere, Mr. Trump’s path to re-election has always required expanding his support in rural and exurban counties in Pennsylvania, as well as in other industrial states where he squeezed out victories in 2016.

Now that early voting is underway, the question of whether he can increase that support is no longer academic. Mr. Trump is attracting tens of thousands of voters like Mr. Walsh who sat out 2016 in Pennsylvania. Around 24 percent of the 424,000 registered Republicans who have cast early mail-in votes in the state did not vote four years ago, according to TargetSmart, a Democratic elections data firm.

But before the Trump campaign takes a victory lap, the same data analysis shows that in Pennsylvania — where at least 1.9 million voters had returned ballots as of Thursday — Democrats are keeping pace. About one in four of the 1.3 million registered Democrats who have voted did not vote in 2016.

Both parties are succeeding in one of their chief goals this year: to motivate large numbers of infrequent voters or nonvoters to come off the sidelines for what supporters of both nominees call the most crucial election of a lifetime. It was a goal that eluded Senator Bernie Sanders during the Democratic primary, but with Democrats united, Mr. Biden is pulling it off. And Mr. Trump is answering critics who said his appeal was limited to those in his base who voted for him four years ago.

The trends playing out in Pennsylvania are seen across 14 battleground states, where more than 10 million people who didn’t vote in 2016 have already cast ballots this year, making up 25 percent of the early vote in those states.

“The fact that one in four didn’t vote in 2016 suggests there’s a whole lot of these turnout targets who didn’t come out before, who have been motivated to come out,” said Tom Bonier, the chief executive of TargetSmart.

So far, the data shows that more Democratic-leaning voters who didn’t cast ballots in 2016 are turning out than Republican-leaning voters. “Nationally, Democrats have a modeled advantage of 14.5 percent with those non-2016 voters,” Mr. Bonier said.

But that is partly because Mr. Trump has made mail-in ballots toxic to many of his supporters through his frequent (and unfounded) claims that mail voting is ripe for fraud. Trump supporters are expected to dominate in-person voting on Election Day in some battleground states. The current Democratic advantage with non-2016 voters could even out by Election Day. 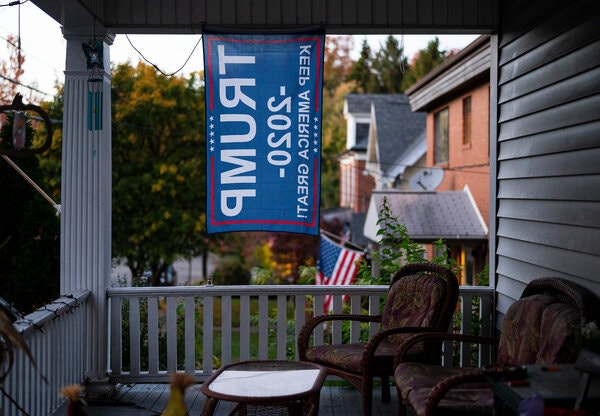 Remarkably, the surge of voters who did not vote four years ago is not primarily driven by people who have turned 18 since 2016. Nationally, the number of early voters this year who are 50 and over and didn’t turn out in 2016, which was 6.4 million as of Thursday, was greater than those under 30, about 4.9 million. All age groups are exhibiting an intense interest in voting.

Geraldine Folk, 82, of Fleetwood, Pa., recently sent in a mail ballot for Mr. Biden, her first presidential vote ever. “I’ve never seen a president like this in all my life, and I went through a lot of presidents,” she said of Mr. Trump.

“He was on with Stahl last night on ‘60 Minutes’ and he was obnoxious and left — he’s not a decent person,” Ms. Folk said of Mr. Trump’s bolting from an interview with the CBS journalist Lesley Stahl. “I hate the way he’s running this country. It’s just a disgrace.”

Ms. Folk worked as a sewing machine operator in a factory until she was injured in an auto accident. Her husband, who died a dozen years ago, was an electrician in a cement plant. Today she has a partial disability. “If my legs were good, I’d be out there campaigning, and they wouldn’t like what I had to say — I’m a very outspoken woman,” she said. “I think he’s a useless you-know-what.”

TargetSmart’s data is different from a poll. The firm matches every early vote to the name of a person in state databases of registered voters. Although it is impossible to know how a person voted, the voter file unlocks a trove of information, including a voter’s age, race, sex and history of past voting. In states without partisan registration, the firm models voters’ likely party preference based on other information.

Mr. Trump’s 44,000-vote victory in Pennsylvania four years ago, in which he won by less than one percentage point, hinged on places like Westmoreland County, once a blue-collar Democratic stronghold, which the president carried by 31 points, a wider margin than in any of the state’s other populous counties.

The Trump campaign and its allies have pumped resources into expanding that margin. Route 30 into Greensburg, the county seat, features a pro-Trump billboard promising to “Keep Nat Gas and Coal Jobs” and another attacking Mr. Biden as “a totally corrupt politician.”

Brittney Robinson, the Republican National Committee’s state director in Pennsylvania, said the party had made a “huge investment” in data that it has used to “find these people who are likely to support the president who may not have voted for him in 2016” and try to turn them out.

The Biden campaign said that Mr. Trump’s share of voters has not grown even if he is turning out new supporters.

“Our strategy in Pennsylvania has always been to energize, mobilize and turn out our base in Democratic strongholds, expand on Democratic gains in the suburbs and collar counties, and win back voters who gave Trump a shot in 2016 or may have sat out that election,’’ said Brendan McPhillips, the Biden campaign’s state director.

Without the state’s 20 electoral votes, Mr. Trump would have an extremely narrow path to re-election. Mr. Biden has wider options, based on current polling in battleground states. 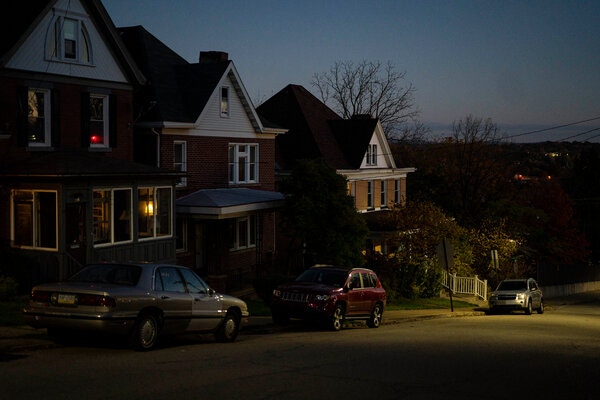 Despite efforts by the president’s campaign and outside groups to expand his support with the voters most likely to back him — white blue-collar workers — polling shows him trailing his 2016 benchmarks. In the latest New York Times/Siena College poll of Pennsylvania, the president led Mr. Biden among white voters without four-year college degrees by 13 points — a considerable narrowing from his 32-point edge among these voters against Hillary Clinton in 2016, according to exit polls.

Four years ago, polls of congressional districts with large numbers of white working-class voters were a little-noticed alarm signaling Mrs. Clinton’s vulnerability in the state. Now, public and private polls of those districts in Pennsylvania suggest trouble for Mr. Trump.

A Muhlenberg College survey in September of the Seventh Congressional District, in the Lehigh Valley, showed Mr. Biden with a seven-point lead over Mr. Trump. Pennsylvania’s districts were redrawn two years ago; Mr. Trump lost the equivalent of the new Seventh District to Mrs. Clinton by one percentage point.

Representative Mike Kelly, a Republican representing the 16th District in northwest Pennsylvania, which includes the city of Erie, boasted to reporters last week of record-high enthusiasm for the president, citing farmers who “take time to paint the sides of their barns” with Mr. Trump’s name, as well as the rising number of newly registered Republicans.

Mr. Kelly pointed to internal polls showing “a lead of 9, 10 percent” for the president in the district.

The problem for Mr. Trump, though, is that he carried the equivalent of the 16th District by twice that much, 20 points, in 2016, according to a New York Times analysis.

In Erie County, where Mr. Trump and Mr. Biden have both recently campaigned, Marie Zamiska, 65, cast a mail ballot this year for Mr. Biden, the former vice president. She did not vote four years ago.

“To be honest, in 2016 I didn’t think either candidate would have made a good president, so I chose to abstain,” said Ms. Zamiska, a retired health care consultant. “The last four years have been very painful. He has certainly not brought any unity to the country,” she said of Mr. Trump. “He hasn’t solved any problems other than his own that he feels he can make money on. I certainly don’t want to live through another four years of Trump.”

On the other end of the state, in Allentown, Salena Sanchez is a 2016 nonvoter who is still on the fence about whether she will vote this year.

Registered as a Democrat, Ms. Sanchez, 37, who works the overnight shift in a warehouse, said she leaned Republican these days.

She was all set to vote for Mr. Trump — until the first debate, with the president’s constant interrupting and Mr. Biden’s retort of “Shut up, man.”

“About 20 minutes in, I shut it off,” she said. “I was really leaning toward Trump, but with the debate, that’s what turned me away from wanting to vote.”

Ms. Sanchez had to work last week during the final debate, but she plans to catch up with a recording. Depending on what she sees, she said, she will make up her mind about whether to cast a ballot or not.

Tags
District Not She Trump Who

In Michigan, a Suburban County That Flipped Blue Isn’t Looking Back