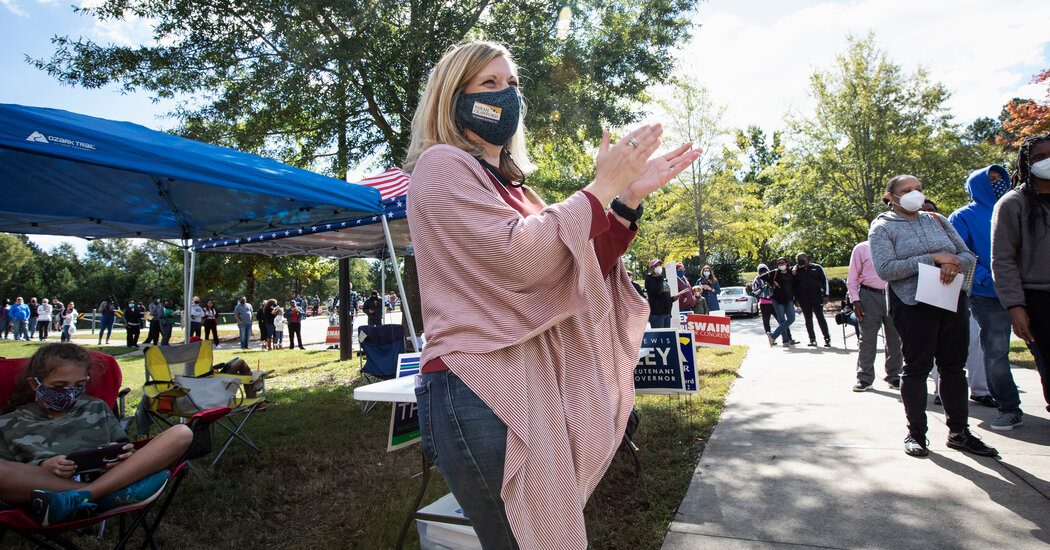 RALEIGH, N.C. — North Carolina, a crucial battleground for the presidential race and control of the United States Senate, has another coveted prize at stake in this election, one that is drawing serious out-of-state money, dominating television ads and driving get-out-the-vote efforts.

Democrats believe they have a chance of gaining control of the State Legislature for the first time in a decade, which would make it possible to expand Medicaid to cover half-a-million more low-income adults here after years of Republican resistance.

The health care issue is paramount up and down the ticket in North Carolina, with left-leaning national and in-state groups using it to motivate Democratic voters — especially those who stayed home in 2016. Many of them belong to the demographic who would become eligible for Medicaid, the free government health insurance program, if the legislature voted to expand it as the Affordable Care Act allows.

Rita Blalock, a cook at McDonald’s who has gone without health insurance for most of her life, is one of them. She said she hadn’t always voted in elections but this week she cast her ballot early for a straight Democratic ticket, in hopes of seeing her two biggest goals realized: getting a higher minimum wage and getting Medicaid.

Ms. Blalock, 54, who volunteers with a national group fighting for a higher minimum wage, has cataracts in both eyes that have worsened to the point where she can barely read the order screen at her job. She was approved for temporary Medicaid recently to pay for urgently needed cataract surgery, but it won’t cover anything else and she longs for permanent coverage.

“I’m not going to say I’ve been a faithful voter, but it’s important for a lot of things,” she said. “For what I’m going through right now. For the minimum wage, for health care.”

Preserving the A.C.A. overall has been a rallying cry for Democrats across the country as the coronavirus sickens millions of Americans and the Supreme Court prepares to hear arguments next month in a case seeking to overturn the law, also called Obamacare. The Trump administration is actively supporting the case, and President Trump’s nominee for the Supreme Court, Amy Coney Barrett, has criticized past decisions to uphold it.

Of the many state clashes over whether to expand Medicaid since the A.C.A. passed a decade ago, few have been as pitched as North Carolina’s. Here is where supporters have conducted hundreds of “Moral Mondays” protests at the State Capitol, where the Republican mayor of a town that lost its hospital walked all the way to Washington to build support for Medicaid expansion and where, for the past four years, Gov. Roy Cooper, a first-term Democrat who has a comfortable lead in his re-election race, has failed to push it through the Republican legislature despite making it a top priority.

The state is one of 12 remaining — all with Republican or divided leadership, most of them in the South — that have not expanded the Medicaid program. Two years ago, Democrats flipped enough seats in the North Carolina House and Senate to break Republican supermajorities that had been in place since 2010, when Republicans won control of the legislature for the first time in more than a century due in no small part to a voter backlash against Obamacare. Now, Democrats need to pick up six seats in the House and five in the Senate to claim the majority, including in some districts where Republican support is strong.

It is hardly a fait accompli, but new court-ordered district maps last year and an influx of Hispanics and college-educated people from the Northeast have made more races competitive for Democrats. So far, about a quarter of the state’s flood of early voters did not cast ballots here in 2016,

Strategists say the State Senate is more within reach, but even winning one chamber could put enough pressure on Republican lawmakers, some of whom have already come to support Medicaid expansion and even introduced a bill to allow it with conditions, to accomplish it.

“Even if we aren’t able to flip these chambers, running up the margins will absolutely have an impact on the policy debate and force Republicans to come to the table on this,” said Christina Polizzi, national press secretary for the Democratic Legislative Campaign Committee. She pointed out that a similar dynamic led to Medicaid expansion in Virginia in 2018.

Several Democratic candidates trying to flip seats said the issue had come up repeatedly in conversations with voters. Sarah Crawford, who is running for an open seat in a House district outside Raleigh, recalled talking to a voter recently who was supporting President Trump because she opposed abortion, but said she would vote for Governor Cooper, the incumbent Democrat, and for Ms. Crawford, because “‘Medicaid expansion would really benefit our family.’” 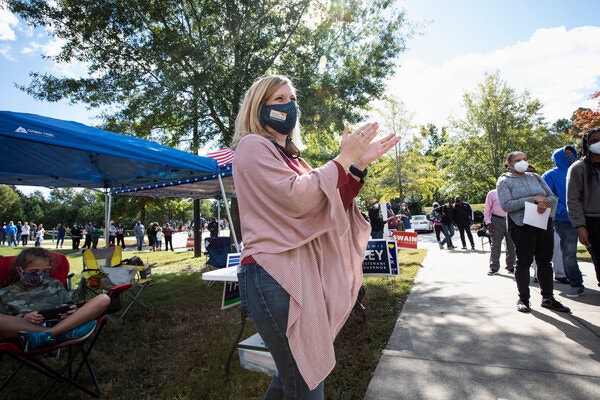 Republican candidates are largely seeking to avoid the issue. the law is more popular now than in 2016, when promising to repeal Obamacare was one of the party’s most effective pitches — an evolution Democrats used to their advantage in the 2018 midterm elections.

If pressed, Republicans who oppose Obamacare say that expanding Medicaid would be too expensive — the health law requires the federal government to pay 90 percent of the cost They argue that even 10 percent would strain state budgets and that the arrangement might not last.

“Reversing the course and expanding Medicaid now would cost North Carolina citizens billions over the next 10 years and take away funding from important priorities like public education,” State Senator Deanna Ballard, a Republican defending a seat in the northwestern corner of the state, told a newspaper there.

Former Vice President Joseph R. Biden has said he would provide free coverage to low-income adults in states that have rejected Medicaid expansion through a new government-run plan, or public option. But it will likely be challenging for Mr. Biden to get the plan through Congress.

Helping lead the charge to flip the legislature here is the Rev. Dr. William J. Barber II, the civil rights leader and former head of the state N.A.A.C.P. who started the Moral Monday protests in 2013. His coalition, the Poor People’s Campaign, has been focused on rallying low-income voters to the polls, especially in the 12 states, largely in the South, that have not expanded Medicaid.

Based in Goldsboro, a city in eastern North Carolina where he leads a church, Dr. Barber has held a series of virtual rallies and town hall events to draw attention to Medicaid expansion as a get-out-the-vote issue, pointing in particular to Senator Thom Tillis’s actions to block it in his former role as the speaker of the North Carolina House of Representatives and urging low-income people to vote. Senator Tillis, a Republican, is now in a tight contest to keep his U.S. Senate seat.

“The reality is it’s a lie that we don’t need health care and it’s a lie especially in the time of Covid,” Rev. Barber said last week at a get-out-the-vote event in downtown Raleigh, leaning into a microphone as a two-hour line to vote snaked behind him. “Register where you stand on all these issues by casting your ballot. And remember, nobody would work this much to take something from you if it wasn’t valuable.” 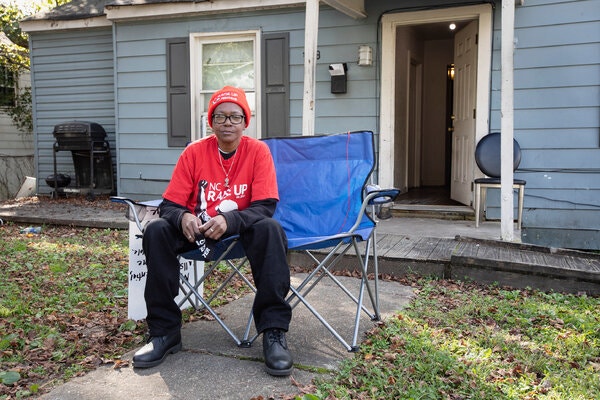 If low-income registered voters cast ballots at the same rate as higher-income voters in 15 states that went to Mr. Trump in 2016, including North Carolina, they would match or exceed his margin of victory in those states, the study found. And for many, access to health care has been an elusive goal, often with devastating consequences.

In an interview, Dr. Barber said the coronavirus pandemic had turned that lack of access into a crisis.

“Covid has forced the conversation about health care,” he said. “There’s no way you cannot talk about it.”

Dr. Barber is quick to remind his audiences in North Carolina that Senator Tillis helped lead a successful effort in the legislature to pass a law prohibiting Medicaid expansion in 2013, when he was the speaker of the House of Representatives. The Poor People’s Campaign has recruited more than 5,000 volunteers in eight states “who are committing to call over one million poor and low-wage people who did not vote last time, are willing to be poll watchers, or are going to canvas in communities with their face shields and masks and gloves,” he said, “because it’s a matter of life and death in the real sense.”

Jessica Holmes, a Democrat running for commissioner of labor, said such efforts were motivating people like her 84-year-old grandmother, who she said has never voted in a presidential election until now.

“We’re in the greatest medical crisis of many of our lifetimes,” Ms. Holmes said, “and yet all across North Carolina we’re talking about selling hospitals or clinics closing.”

Joseph Danko, 54, who lost his construction job in March and suffers from asthma, was anguished to learn he was ineligible for Medicaid despite having next to no income. Anxiety about health care was a prime reason that Mr. Danko, of Raleigh, voted early for Mr. Biden and other Democrats, he said, delivering his mail-in ballot in person “to be 100 percent sure” it would be counted.

“It’s been a crazy year,” he said, “but we are hoping and praying for change.”

Tags
North Carolina One Seat She Who