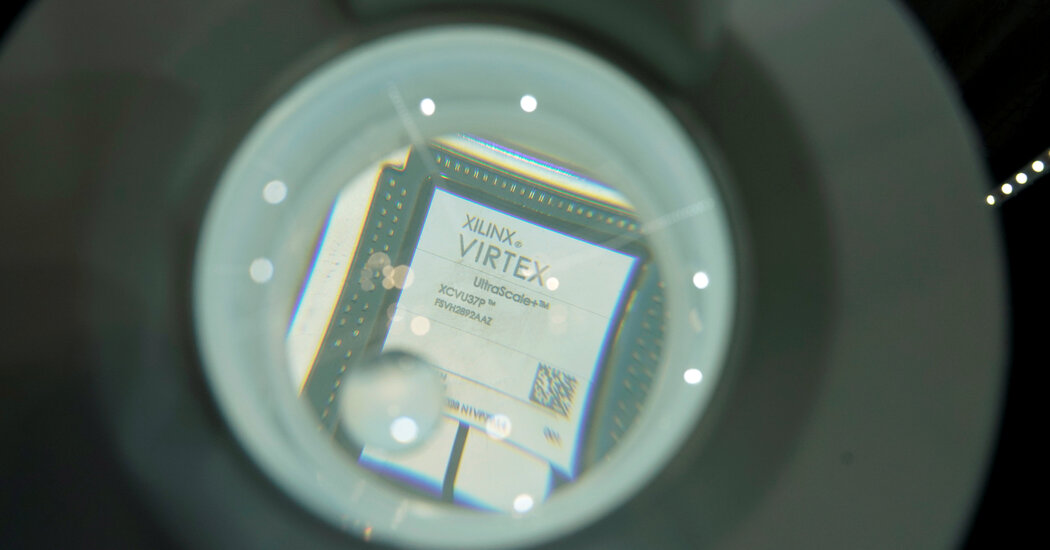 SAN FRANCISCO — Advanced Micro Devices agreed to pay $35 billion in stock for Xilinx, a deal aimed at reshaping one of the computer chip industry’s pioneers.

A.M.D., known mainly as Intel’s longtime rival in microprocessors that power most computers, plans to use the acquisition to broaden its business into chips for markets like 5G wireless communications and automotive electronics. The transaction could also help A.M.D. grab a bigger share of component sales for data centers and counter a prominent rival, Nvidia, which is also bulking up.

The all-stock deal, announced on Tuesday along with A.M.D.’s third-quarter financial results, would be close to the most valuable acquisition in the chip industry’s history. Those bragging rights are currently held by Nvidia for its proposed $40 billion deal for British chip designer Arm, which was announced last month.

Chip makers have experienced several consolidation waves, driven by factors such as duplicate product lines and cost-cutting strategies. But A.M.D., which is enjoying some of the most robust sales in its 51-year history, expects Xilinx to expand its business while boosting profits.

Lisa Su, A.M.D.’s chief executive, said in prepared remarks that Xilinx would help establish her company as “the industry’s high performance computing leader and partner of choice for the largest and most important technology companies in the world.”

That sort of reputation has long eluded A.M.D., which for decades was seen as an Intel follower that mainly won sales with lower prices. But the company has lately grabbed a lead over Intel in some key measures of computing performance, while its larger rival has suffered technological and financial stumbles.

Last Thursday, Intel reported a 29 percent decline in quarterly profits, which caused its stock to fall more than 10 percent. A.M.D., by contrast, reported on Tuesday that its quarterly profit rose by 148 percent.

A.M.D.’s stock, which was trading five years ago at about $2 a share, has risen nearly 80 percent this year and closed Monday at slightly above $82. A.M.D.’s market value stands now at nearly $100 billion.

Xilinx, founded in 1984, is the biggest maker of a class of chips that can be reconfigured for a variety of specialized tasks after they leave the factory. Such field programmable gate arrays, as they are called, have long been particularly popular in telecommunications applications, such as cellular base stations now being upgraded for the latest 5G technology.

Xilinx has also been one of the biggest chip companies hurt by trade limits on China’s Huawei, a major maker of networking equipment that is one of Xilinx’s biggest customers. The company last week said that revenue declined 8 percent.

But Xilinx’s gross margins are much higher than A.M.D.’s, and the company continues to generate considerable cash. Xilinx’s market value currently stands at about $28 billion, reflecting a sharp jump after The Wall Street Journal reported deal talks between the companies on Oct. 8.

A.M.D.’s interest in Xilinx emulates a path taken by Intel. In 2015, Intel entered the same business by paying $16.7 billion for Altera, Xilinx’s main competitor. That deal, inspired partly by the prospect of producing Altera chips in Intel factories, has failed to generate big returns as Intel’s manufacturing processes have fallen behind rivals.

A.M.D. relies heavily on external manufacturing partners, as does Xilinx — particularly Taiwan Semiconductor Manufacturing Company, which has grabbed a lead in packing smaller transistors on each chip. Both companies also have pushed new technologies for creating new products from packaging multiple chips together.

The proposed transaction dwarfs A.M.D.’s most significant past acquisition, a $5.4 billion deal for ATI Technologies in 2006 that took the company into competition with Nvidia for chips that render images in video games. That graphics technology would make A.M.D. a major supplier of chips for video game consoles. But it also saddled A.M.D. with a heavy debt load that took more than a decade to erase.

A.M.D. reported about $1.7 billion in cash at the end of September.

The companies said the deal was expected to be completed by the end of 2021. Victor Peng, Xilinx’s chief executive, will continue to lead the operation following the close of the deal, the companies said.