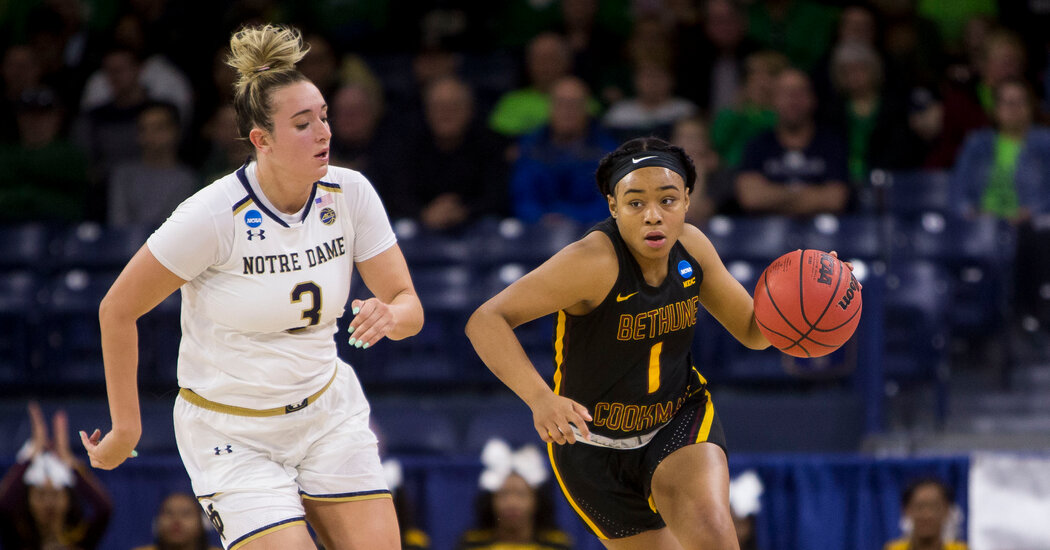 The women’s basketball team at Bethune-Cookman University conducted an ordinary practice on Monday morning. The coaches spent time reviewing the fundamentals of the pack-line defense, testing the players’ knowledge of different sets. They proceeded with a lengthy scrimmage.

As it turned out, the practice will be the team’s last for 2020-21. When the players convened next, on a hastily arranged conference call that afternoon, they learned their season was over.

Bethune-Cookman,a historically Black university in Daytona Beach, Fla., became the first Division I school to cancel sports for the rest of the academic year because of the coronavirus pandemic. E. LaBrent Chrite, the university’s president, made the decision based on rising coronavirus rates across the state, county and especially on campus, which was locked down last week after 30 students were isolated after testing positive for the virus.

The decision brings to an end the hopes that winter and spring sports like basketball, baseball, softball and track and field would be played, and also ended the hopes for football and volleyball, which were delayed from their usual fall seasons.

“We’re the first,” Vanessa Blair-Lewis, the women’s basketball coach, said of the cancellations. “But we’re not going to be the last.”

Major college football has plowed forward, postponing or canceling some games and playing others amid virus outbreaks. On Wednesday, Wisconsin canceled its game with Nebraska and paused football activities after six players and six staffers, including its coach, tested positive. (Nebraska tried to book a replacement game, but its plan was rejected by its conference, the Big Ten.)

Basketball, even with rosters that are far smaller than football’s, may prove thorny for its own reasons.

The start of the season has been pushed back to Nov. 25, about two weeks later than planned.

Basketball can be waylaid by several factors. One or two positive cases can shut down an entire team for weeks, as is happening now at Marquette, where the men’s and women’s basketball teams are in the middle of a 14-day pause after positive cases. That could mean the loss of nearly a half-dozen games during the season.

ESPN this week canceled eight men’s basketball tournaments it was planning to conduct with 22 teams at Walt Disney World near Orlando, Fla., where the N.B.A. had its playoffs at a restricted site. The events were canceled after programs balked at some of ESPN’s health and safety measures, which were more stringent than those of universities and conferences. According to CBS Sports, one proposed requirement was that anyone in a team’s traveling party who tested positive had to be isolated in the Orlando area for 14 days at the university’s expense.

Four weeks before the start of the season, the Seton Hall men’s basketball team knows the dates and locations of five games on its schedule, all in December.

“I wouldn’t use the word ‘disaster’ because that would be too light a term,” Seton Hall’s coach, Kevin Willard, said Wednesday on a Big East Conference call, before settling on a descriptor that included an expletive. The conference’s commissioner, Val Ackerman, said that she hoped the rest of the 20-game conference schedule would be released in a month, and that while the conference teams in the Northeast could travel by bus as usual, the ones that are farther afield — Xavier, Creighton and Marquette, for example — could play games in a quasi-bubble.

The season’s tentative nature is driven home by the rise in virus cases, which have grown by 41 percent nationally over the last two weeks to a daily average of more than 75,000 cases — a development that was largely expected by infectious disease experts as the weather turned chilly and more people stayed indoors, where the virus can spread more easily.

Then there are places like Daytona Beach, where Bethune-Cookman sits and where tens of thousands of visitors arrived the last two weekends for Biketoberfest and Trucktoberfest despite city commissioners not granting permits for vendors or live music. The transient population will only increase in the coming months as snowbirds arrive.

It was around that time when the parents of Imani Reid, a sophomore forward on the Bethune-Cookman women’s basketball team, arrived from Columbia, Md., to check on their daughter after she had been involved in a car accident. Shortly after they arrived home, her mother became sick with the virus. Reid’s father and younger brother also contracted it, as did her grandparents, great-grandmother and great-aunt, though they were largely asymptomatic.

“It’s a bittersweet moment,” said Reid, who was hoping to impress the coaches with her development since last season, when Bethune-Cookman won a share of the conference title for the fourth time in five seasons. But she is also viewing the decision to halt the season as a sign of providence. The meeting, she said, was emotional — particularly for the three seniors, one of whom, Amaya Scott, was voted the Mid-Eastern Athletic Conference’s preseason player of the year.

Blair-Lewis, the Bethune-Cookman coach, said several players have had similar experiences with the virus. “Our girls get it,” she said. “We have to look at the best interests of our kids, our athletes. Until there is a better solution, we can no longer put our kids at risk just because we’re passionate about the sport. We have to pause for the cause and let the doctors and scientists go to work.”

She is also certain that her university will not be the last to put basketball to the side.

Tags
After Play She Virus Week