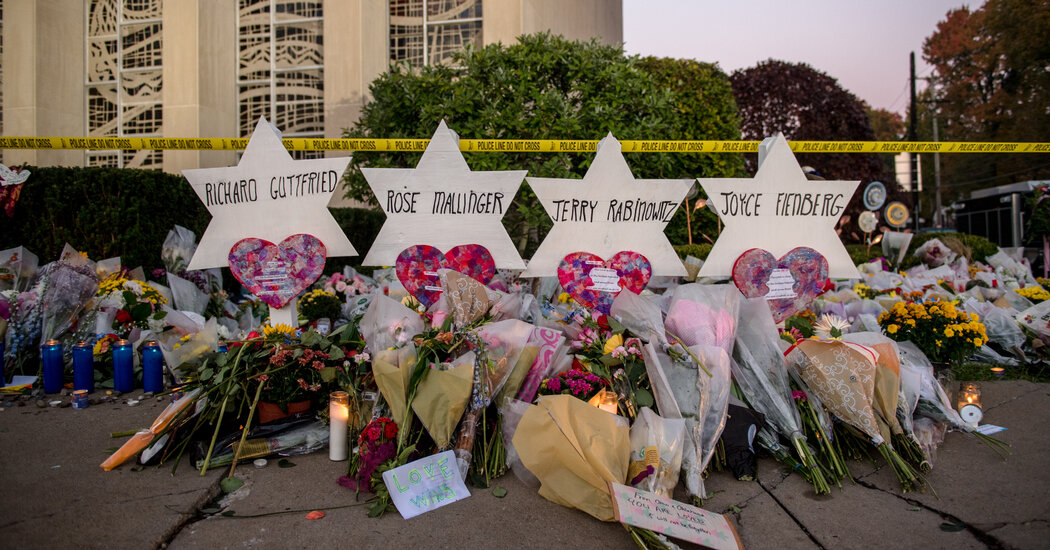 On Oct. 27, 2018, a man armed with a semiautomatic rifle and three pistols entered Pittsburgh’s Tree of Life synagogue and murdered 11 congregants. In addition to raging anti-Semitism, the killer had a more immediate motive: fury that the synagogue had participated in the National Refugee Shabbat, sponsored by the humanitarian group HIAS, formerly known as the Hebrew Immigrant Aid Society.

“HIAS likes to bring invaders in that kill our people,” he wrote on a social network. “I can’t sit by and watch my people get slaughtered. Screw your optics, I’m going in.”

The killer’s immigration obsession, emerging from the same bonfire of bigotries that President Trump had stoked for years, led many people, including me, to conclude that the president could not be excused from what had happened in Pittsburgh. Anti-Semitism flourishes when adjacent hatreds — of “globalists,” “corporate media,” “Hollywood” and so on — cease to be taboo. Anti-Semitism also flourishes when the purveyors of these adjacencies cease to be disreputable.

What goes for the right and its uglier obsessions goes also for the left, in ways the left is sometimes loath to recognize.

There are left-wing party leaders who think a public mural depicting elderly bankers playing Monopoly on the backs of naked figures is just a critique of rapacious capitalism. Those who notice the prominent noses on the bankers have reason to think otherwise.

There are cultural arbiters ready to cancel anyone’s careers over bigotry — except when, say, the rapper Ice Cube or the N.F.L. player DeSean Jackson, or the N.B.A. player Stephen Jackson posts anti-Semitic messages on social media.

“Given the new woke-fulness in Hollywood and the sports world, we expected more passionate public outrage,” the basketball legend Kareem Abdul-Jabbar sharply observed last summer. “What we got was a shrug of meh-rage.”

There are magazine editors who are racing to live down a reputation for indifference to — or worse, perpetuation of — racism inside their publications. But when one of these same magazines publishes a flattering profile of Louis Farrakhan devotee Tamika Mallory with pious attention to her social activism but no mention of her acceptance of Farrakhan’s anti-Semitism it passes without comment or objection on the left.

There are leading left-wing political activists who claim that Israel “is built on the idea that Jews are supreme to everyone else,” implying that any form of Zionism, including progressive Zionism, is inherently sympathetic to white supremacy. But when a Jewish undergraduate is hounded off a student council (“Impeach her Zionist ass,” according to the social media campaign against her) she may understandably wonder whether the hoary equivalence of Zionism and racism hasn’t become another pretext to target Jews.

The list goes on. In the months after the Pittsburgh massacre, I sometimes heard the argument that Jews had far more to fear from the anti-Semitism of the Charlottesville right — which, after all, had led to the shedding of human blood in Pittsburgh and later at a synagogue in Poway, Calif. — than from the anti-Semitic “microaggressions” from other quarters. Mainstream media reports added to the perception that the rise in hate crimes, including crimes against Jews, was overwhelmingly a function of right-wing hate.

But then a tsunami of anti-Semitic assaults came crashing down on the Orthodox communities in New York, largely perpetrated by “young men of color,” according to The Times. And then five people were murdered in two separate terrorist attacks in Jersey City and Monsey, N.Y. In neither of these fatal attacks against Jews were white supremacists involved.

All of this should serve as stark reminders that when it comes to anti-Semitism, neither left nor right nor Black nor white has any kind of monopoly. No less important, no side is free of political leanings that are, if not anti-Semitic, then perilously close to it. The Trumpian right’s obsession with border walls, protective tariffs and drastic cuts to legal immigration is a vehicle for a toxic brand of American nationalism that over time cannot bode well for American Jews.

But the left’s fetish with pyramids of privilege and intersections of oppression is just as toxic, if not more, considering the broad success of American Jews in the ladders of educational, economic and cultural attainment. Whenever the success or merit of a minority group turns into a presumption of social guilt — whether it was the Asian community in Idi Amin’s Uganda, the Chinese in Suharto’s Indonesia, or Jews in Weimar Germany — the consequences tend to be catastrophic.

Two years ago, a once-unthinkable attack became an all-too-thinkable possibility for every synagogue in America. In itself, Pittsburgh should serve as a permanent reminder of how easily the politics of demonizing immigrants can lead to killing Jews.

But the broader lesson is that any ideology that borders on anti-Semitism can easily descend toward it. And anyone who isn’t calling out his own side as much as the other speeds that descent.

Tags
Can Had Pittsburgh Who