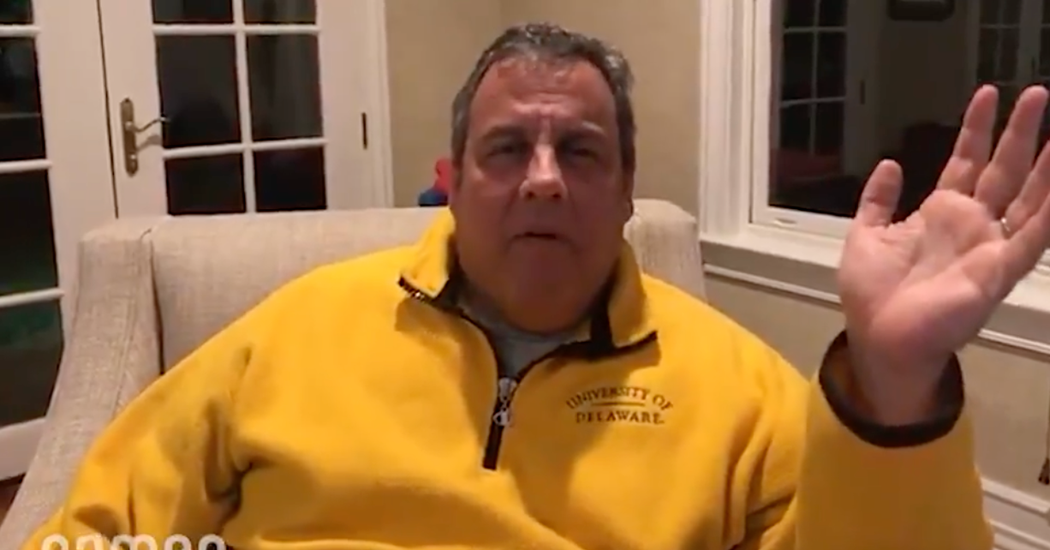 Chris Christie, the former New Jersey governor, on Thursday became the latest Republican politician to be fooled into making a campaign video on behalf of a Democrat.

Mr. Christie is one of many of Mr. Trump’s current and former associates available for hire on Cameo, an app that allows users to commission personalized videos from minor — and increasingly major — celebrities.

The video, which cost $200, was framed as a jovial message to a person named Greg, who Mr. Christie was prompted to encourage to return to New Jersey, Greg’s former home.

What Mr. Christie did not know was that the video was meant for Greg Gianforte, the Republican nominee in Montana’s governor’s race. It was commissioned by the campaign of Mr. Gianforte’s opponent, Mike Cooney.

Mr. Cooney’s staff ordered up the Cameo video on Wednesday, and Mr. Christie turned the assignment around quickly, delivering it that evening. (The celebrities available for hire on Cameo are told who to address in their video, but usually do not know the identity of the recipient.)

“Think about everything we got back here,” Mr. Christie says in the video, cajoling “Greg” to return to New Jersey. “We got Taylor ham. We’ve got Bruce Springsteen. We’ve got Jon Bon Jovi. We’ve got the Jersey Shore. We’ve got the boardwalks.”

“We’ve got all that stuff back here that is waiting for you, but more than anything else, Mike and your whole family, they want you back here,” he added.

Then he jokingly threatened to retrieve the addressee himself, if he wouldn’t return willingly. “I don’t think that’s what you want, Greg,” Mr. Christie said.

On Thursday, Mr. Cooney posted the video on Twitter, framing it as a “special message” for his opponent.

Mr. Christie responded by telling NJ Advance Media that he had been hoodwinked, and he tweeted about the incident, emphasizing that he was on Cameo for the benefit of a New Jersey-based charity.

“Shame on @CooneyforMT,” he said in his tweet, stating his support for Mr. Gianforte. (With five days to go, the Montana governor’s race is tight; in a poll released on Wednesday, Mr. Cooney and Mr. Gianforte were tied.)

The idea to prank Mr. Christie originated with Mr. Cooney’s campaign manager, Brad Elkins, who spotted the former governor on Cameo. The move was meant to emphasize a message that Mr. Cooney’s campaign has been pushing: that Mr. Gianforte — who was born in California and spent his early adulthood in New Jersey — is an outsider, with outsider values.

Other Trump associates have been susceptible to pranks like the one organized by Mr. Cooney’s staff. In the last several months, Rob Flaherty, the digital director of Joseph R. Biden Jr.’s presidential campaign, has commissioned Cameo videos from one of Mr. Trump’s former campaign managers, Corey Lewandowski, and Sebastian Gorka, a former White House adviser, as well as the president’s longtime friend Roger Stone.

Each video was made to pump up “Joey” (Mr. Biden) before his debates with Mr. Trump.

Mr. Flaherty tweeted the first clip, from Mr. Lewandowski, on Sept. 29; the one from Mr. Gorka, on Oct. 15; and the final one, from Mr. Stone, on Oct. 22. (The second debate was canceled after a disagreement over Covid-19 safety protocols.)

In the first video, Mr. Lewandowski lamented to “Joey” that “some people out there” are “spreading some nasty rumors about you.”

“Don’t let ’em get to you,” Mr. Lewandowski advised. “Take the fight right to them.”

Mr. Gorka chose what he called “an old Latin saying” to get his point across.

“Nil carborundum illegitimi, don’t let the bastards grind you down,” he said. “We have a republic to save, keep doing what you do. God bless America, MAGA.”

And Mr. Stone encouraged “Joey” to talk trash about his opponents, using a ruder word. “Good luck to you Joey,” he said.

Mr. Flaherty was inspired by Caitlin Legacki, a former campaign press secretary for the New Hampshire senator Jeanne Shaheen, a Democrat. Ms. Legacki had previously pranked Mr. Lewandowski, commissioning a pep talk from him for Ms. Shaheen and one of her spokesmen, Josh Marcus-Blank.

But Steve Bullock, the current governor of Montana, was even earlier to the trend than Ms. Legacki. In the fall of 2019, he posted a Cameo featuring the former White House communications director Anthony Scaramucci.

“We support you, Steve B. I know you’ve got a tough race ahead of you, but you’ve done this before. You know how to win,” says Mr. Scaramucci in the video, unwittingly addressing Gov. Bullock — who was then campaigning to be president — and referring to himself as “the Mooch.” “I’m behind you 100 percent. See you at the finish line.”

In response to the prank, Mr. Scaramucci teased Mr. Bullock about his fund-raising capacity, said that the money he made would go to charity, and wished the Montana governor a Happy Halloween.

Tags
Lewandowski One Video Who You

Jimmy Orr, a Favorite Target of the Colts’ Unitas, Dies at 85