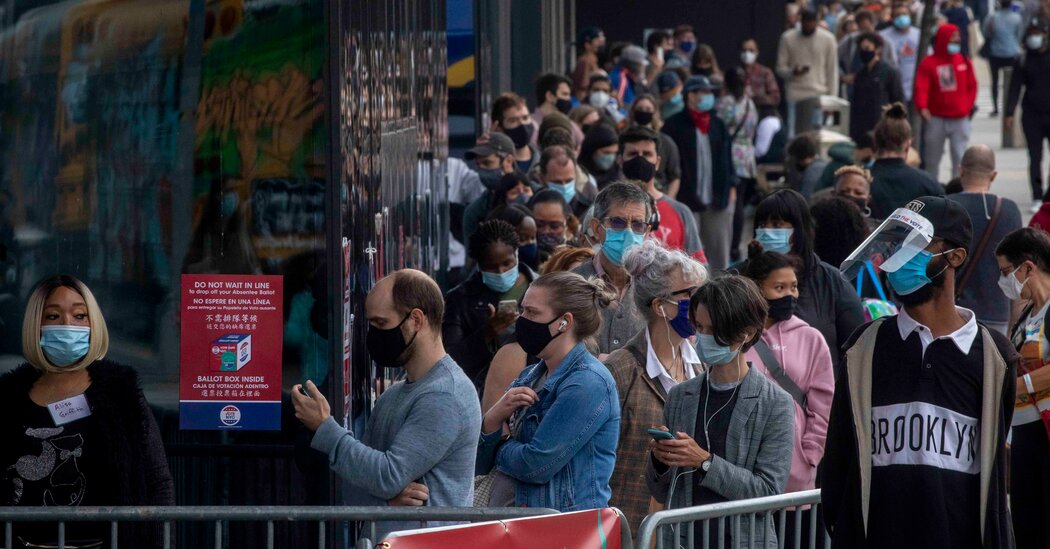 New York City voters continued to show up at the polls on Monday, with every expectation of waiting hours in the cold, drizzling rain. They brought camping chairs. They read old magazines. They made phone calls.

Nearly 315,000 city residents cast their ballots on Saturday, Sunday and Monday, the first three days of early voting in the state. That’s six times the number of people who voted early in the June primaries. Many reported waiting in line for hours.

It’s “unbelievable,” Mayor Bill de Blasio said on Monday. “Literally, we’ve seen nothing like it before.”

The long lines are also in violation of state regulations.

On Monday afternoon, Robert A. Brehm, co-executive director of the state board of elections, sent a memo to local boards — including New York City’s — reminding them that wait times should not exceed 30 minutes.

The memo directed local boards of election to fix the wait times with extra equipment, more workers and whatever else was necessary by Tuesday.

But why is voting taking so long?

Here are our five takeaways from the first three days of early voting in New York City.

People are serious about the right to vote.

Kevin Shade waited outside the Brooklyn Museum to vote on Monday. The socially distanced line stretched from the museum entrance, down the building’s west side, through its back parking lot, up Washington Avenue and onto Eastern Parkway.

Mr. Shade, a 32-year-old woodworker, said he and his girlfriend “were willing to wait however long it was going to take.” He had no umbrella and his hair was damp from the drizzle. But he held a cup of coffee and held out hope for the political process.

“One person can’t change the election but you can make your vote and hopefully the right outcome will happen,” he said.

His enthusiasm mirrored what is happening all over the country, as people flock to the polls to vote early. In New York, this was the first time early voting was an option in a presidential election.

In front of the Brooklyn Museum, Patricia Chan, 38, had packed snacks and passed the time reading “Catch-22.”

She was encouraged by the turnout.

“It’s wonderful to see everyone out and exercising their right to vote, even in the rain,” she said. “It says a lot about the spirit of the time that people are out here.”

Voters are afraid their absentee ballots will not be counted.

In September, the city’s Board of Elections sent out as many as 100,000 defective ballot packages with wrong names and addresses, many of them to voters in Brooklyn.

Just three months earlier, the board had thrown out tens of thousands of ballots, citing technical errors like missing postmarks and poorly sealed envelopes. President Trump has seized on the mishaps, claiming “fraud” and fanning fears about the integrity of mail-in ballots, though voter fraud through mail ballots is rare.

New York officials and advocates are worried less about fraud than bureaucratic incompetence.

“I voted early because the Board of Elections screwed up,” said John Kaehny, the good-government advocate who runs Reinvent Albany and a resident of the Morningside Heights neighborhood of Manhattan. This summer, only two of the four voters in his household got their absentee ballots during the June primary, and they decided not to take any chances this time.

“We didn’t anticipate that the lines would be so long for early voting,” he said.

In fact, lines at Mr. Kaehny’s early voting site — West Side High School on 102nd Street — have stretched so long that they have deterred Douglas A. Kellner from voting there three times.

Mr. Kellner, the co-chair of the New York State Board of Elections and a resident of the Upper West Side of Manhattan, tried to vote on Saturday at 3:30 p.m., but the wait was two hours long. He tried again Sunday afternoon and Monday morning, but again decided to hold off.

“Each time the line was so long,” Mr. Kellner said.

There are not enough polling sites.

The mayor recommended at least 100.

Some major institutions that get city tax breaks and could have acted as polling sites refused to open their doors for early voting. A WNYC analysis found that the city forgoes nearly $600 million a year in property tax revenue from institutions like museums and performance venues that declined to host early voting.

“We had designated them and their staff lunchroom as an early voting site and they initially said they could, but then they decided that because of Covid they can’t and won’t,” he said. “We decided not to sue them.” The museum did not respond to a request for comment.

The distribution of the polling sites has also caused concerns about equity.

Cradlepoint routers are slowing down voting. What are they?

On Monday, Mr. de Blasio urged the city Board of Elections to deploy more of the voting machines that it has in storage, in anticipation of Election Day on Nov. 3, when 1,201 polling sites will be open. But it’s not clear that would solve the board’s problems.

According to Mr. Kellner, polling site capacity is limited by the constraints of their cradlepoints, boxy black wireless network routers that can only accommodate eight electronic poll pads and printer stations each. That’s how voters are checked in, meaning there can be major delays.

Mr. Kellner, the state board co-chair, did some math to break down the city’s problem: “If it takes two minutes to process each voter at the electronic poll book, well then, if everybody’s waiting in line, that station can only handle 30 voters per hour.”

“And if you only have six stations, then that’s only 180 voters per hour,” he continued. “And that’s the fundamental arithmetic that the New York City board is very bad at.”

The state is trying to find a way to enable more poll pads to be used with the routers to check in voters, Mr. Kellner said.

A spokeswoman for the city’s Board of Elections declined multiple requests for comment.

The city Board of Elections is plagued by nepotism, dysfunction, and a structure that works against political accountability. No elected official owns it. Rather, its ten commissioners are appointed by Democratic and Republican party leaders in the city’s five counties, making New York the only state in the country to have elections boards chosen almost entirely by party bosses.

State lawmakers have shown no appetite to amend the state Constitution, which establishes the board’s structure.

The orphaned status of the board was reflected in a recent back and forth between Gov. Andrew M. Cuomo and Mr. de Blasio.

The governor said the board’s dysfunction was the city’s fault. The mayor begged to differ.

Mr. Kaehny, the government watchdog, said, “The powers that be don’t care.”

This Addiction Treatment Works. Why Is It So Underused?