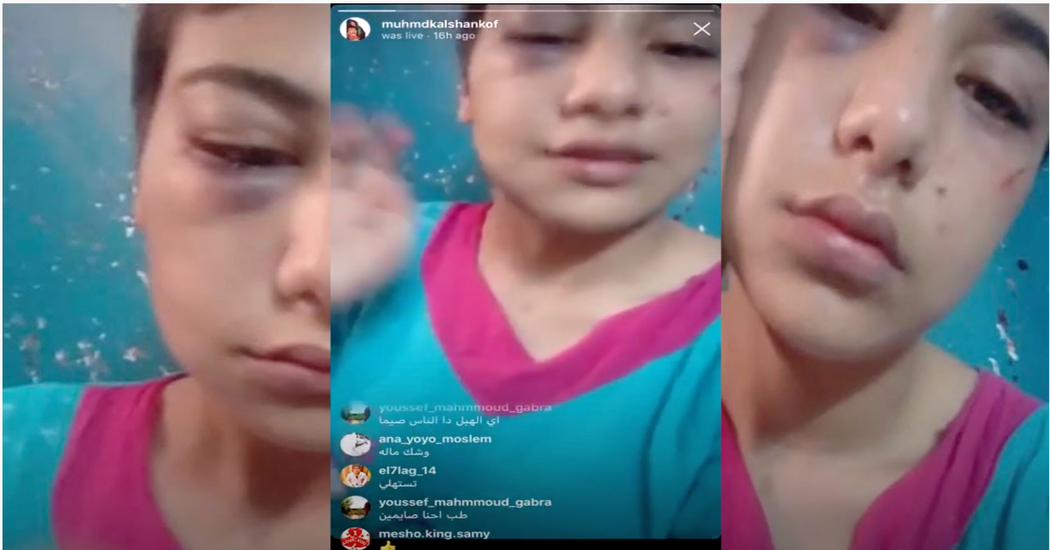 CAIRO — It was a party Aya Khamees has tried to forget.

One evening in May, the 18-year-old woman met up with a few friends, and a few of their friends, at a seedy hotel outside Cairo, not far from the majestic pyramids of Giza. They brought chicken and rice, beer and hash, and rented a few rooms to hang out, flouting Egypt’s strict social rules prohibiting unmarried men and women from mixing in private.

Around 1 a.m., a quarrel broke out. According to prosecutors, a young man, pretending to console Ms. Khamees, walked her into a room, held a razor to her face and raped her.

She went to a police station, battered and bruised, and was turned away, told to go to a different one. With no family to look to for support, she said she felt abandoned and alone.

So she turned to her virtual world. Looking directly into a phone, her eyes blackened, her face cut, she broadcast an account of her attack on TikTok, where she had hundreds of thousands of followers.

“If the government is watching, I want them to get out and get me my rights,” she demanded.

The video went viral, and within days the police had rounded up the entire group — the accused rapist, the other party guests, and Ms. Khamees. She was charged with prostitution, drug use and a crime recently added to Egypt’s penal code: violation of family values.

Blaming the victim for a sex crime is not unusual in Egypt.

But as the video continued to garner views online, a hashtag campaign arose demanding justice, and her case became the subject of the TV news and talk shows. After a three-month probation, during which she was required to complete a rehabilitation program, the charges were dropped.

“At first the government wasn’t going to help me,” Ms. Khamees said in an interview. “But when people spoke up, when my story became a public case, things changed.”

While dropping charges against the victim may seem like scant progress, the case was a harbinger of big changes rocking Egypt’s traditional male-dominated culture. A generation of young women who have found new freedoms online and a voice on social media are challenging the old guard of a socially conservative, patriarchal state that policed the morality of women while allowing crimes against them to go unpunished.

Her case was the leading edge of a moment that seemed to burst out of nowhere all at once.

In July, dozens of women went public with accusations in a serial assault case, leading to an arrest and prosecution. In another high-profile case, a woman testified against a group of wealthy young men, accusing them of gang-raping her years ago in a five-star hotel. And hundreds of reports poured into the National Council for Women with accusations of assaults.

But the groundswell didn’t come out of nowhere. It had been brewing quietly on social media, one of the few remaining precincts of free expression under the rule of President Abdel Fattah el-Sisi, whose government tightly controls traditional media like television and newspapers.

Now the state is pushing back against what some argue amounts to the unraveling of the country’s fundamental values.

A cybercrime law passed two years ago, partly in an effort to regulate social media, created the crime of violating “Egyptian family values.” The values were not defined, leaving it to judges and prosecutors, most of whom are men, to decide what constitutes a violation.

This year, the law took on the wildly popular TikTok app, a network for posting brief videos that young Egyptian women have seized on to flaunt their sexuality in ways they can’t do in real life. The women often wear trendy clothes that push the boundaries of what most Egyptian women can wear in public, and the most popular accounts have amassed millions of followers. 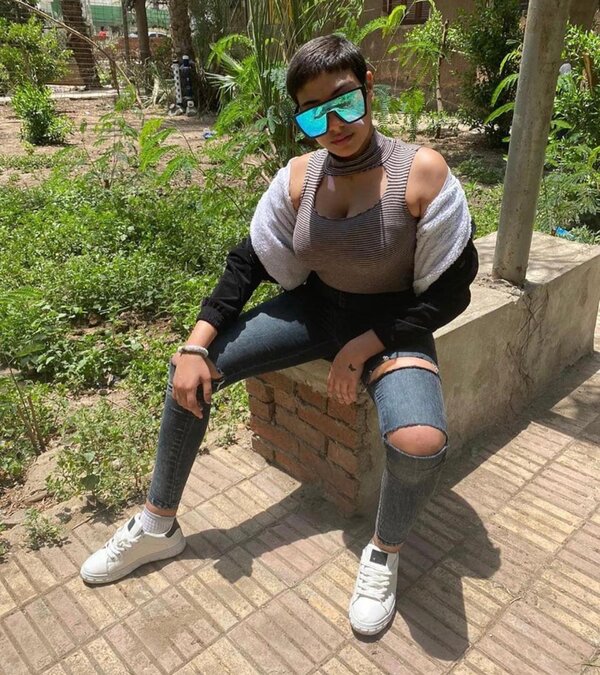 Egyptian prosecutors convicted at least nine TikTok stars this year, all women, of violating family values, sentencing them to at least two years in prison.

“Look at this!” said Mohammad el-Sehemy, a lawyer whose complaint helped send one of the women to jail, furiously pointing to a picture on his phone of a woman sitting in the back seat of a car, fully clothed, her legs wide apart. “It’s suggestive in ways that don’t fit our society.”

Such pictures rob society of its “innocence, chastity and purity,” he said, and would lead other young women down the same sinful road.

Asked why this type of moral policing targets women more than men, he gave a quizzical look. “What indecent thing can a guy do?” he asked.

Ms. Khamees has an answer for him.

Prosecutors say she was raped twice that night in May. Two other guests filmed her trying to get dressed after the attack, visibly shaken and gasping for air. A man is heard making an obscene comment about her, then a hard slap lands on her face. The video was posted online the next day.

“They wanted to break me,” Ms. Khamees said. “It looked like I was caught red handed, doing something wrong, like a prostitute.”

There are no official numbers for the incidence of sexual assault in Egypt, but experts say the number reported is a fraction of those committed. Women are terrified of reporting the crimes for fear they will be blamed and end up in jail.

The investigation usually entails scrutiny of the victim’s sexual history, with an emphasis on her virginity status. If she wasn’t a virgin, women’s advocates say, the police and prosecutors conclude she had it coming.

“If a girl had sex in previous relationships, there’s this sense of why not him as well?” said Hoda Nasralla, Ms. Khamees’s lawyer. “She’ll be perceived as a whore who encouraged the man to rape her. In the public imagination, for it to be considered rape, a woman has to be this innocent virgin who gets kidnapped before she’s assaulted.”

Even as the state moved to drop charges against Ms. Khamees, prosecutors mandated a three-month rehabilitation program to “reform her” and “correct her concepts.” The prosecutor’s statement conceded that she was a victim, deprived of her parents, who were dead, and “fooled by the fame that she achieved in a virtual environment, especially social media sites that delivered her to the wrong crowd.”

Lobna Darwish, the gender and human rights officer at the Egyptian Initiative for Personal Rights, an independent human rights group, applauded the decision to drop the charges but criticized the public prosecutor’s disciplinary tone.

“It’s like saying this woman needs to behave,” she said. “So the question becomes what is moral without establishing that women are free to live as they wish and still have a right to be safe.”

Ms. Khamees’s posts on TikTok, where she uses the handle Menna Abdel Aziz, were standard fare for the medium, with lots of dancing and posing in sexy outfits. For her generation, online at least, this is the new normal.

“What’s different is they’re not hiding, they’re wearing crop tops and dancing in the street,” Ms. Darwish said. “The idea that these women, who are not privileged, could have their own sense of self-worth and freedom drives people crazy. There’s an atmosphere of panic that society is changing.”

In many ways it is, with young women in the vanguard.

There’s Nadine Abdel Hamid, 22, a music technology student at one of Egypt’s elite universities who outed a young man in June who had harassed and blackmailed her for years. The revelation encouraged other women to speak out, producing an avalanche of harrowing testimonies including dozens who said they had been assaulted. The case led to a law protecting the identity of the accuser in sexual assault cases.

There’s Nour Imam, 28, who works as a doula, a woman who assists with childbirth, and is a growing Instagram phenomenon, who has made it her mission to normalize discussion of a woman’s body. One of her latest posts, an illustration of a woman holding up a mirror to her vagina, drove away hundreds of followers. Her response, in another post: “Bye.”

Fadila Elkarrany, 21, created Teen Times, an online magazine for teenage girls. Some of its content mirrors that of old-school teen magazines with tips on how to lose weight and prevent ingrown hairs. More surprising, however, are articles that offer advice on how to “sext” safely “if your reputation is important to you but so is your sexual health.”

And then there is Ms. Khamees, who set a precedent by exposing her identity and confronting her rapist and his accomplices online. Because she had shared her story widely, The New York Times, with her permission, used her name and photographs in this article.

The suspect in her case, Bassam Hanna, a 25-year-old liquor store owner, has denied the charges. His trial has begun and he is expected to appear in court in December.

Ms. Khamees has taken her fate with a mix of acceptance and cynicism. In rehab a social worker helped her discern “right from wrong,” she said, and sounded like she meant it.

She lives with her older brother, who acts as her guardian and lets her go out one night a week. Otherwise, her social life is mostly on TikTok and Instagram.

But she has deactivated her old accounts and started new ones to revamp her image. She still sings and dances, but in a T-shirt covering her chest and shoulders.

“It’s backward,” she said, sitting in a coffee shop in a sleeveless shirt, smoking a cigarette. “But I have to get in line and be backward. We’re not in America.”

She had scars running up the insides of her arms where she’d cut herself. She described them as cries for help, not suicide attempts, and most were reactions to two shattering events: Some she made after her mother died four years ago, others after she said she was raped.

She is still waiting for justice.

“I want to see the people who hurt me go to jail,” she said. “I will walk with my head held high or I will unleash all hell on this country. Just look what I managed to do with a five-minute video.”

Tags
Had Not One She Who

A Decade Later, Salem Returns to an Even Darker World