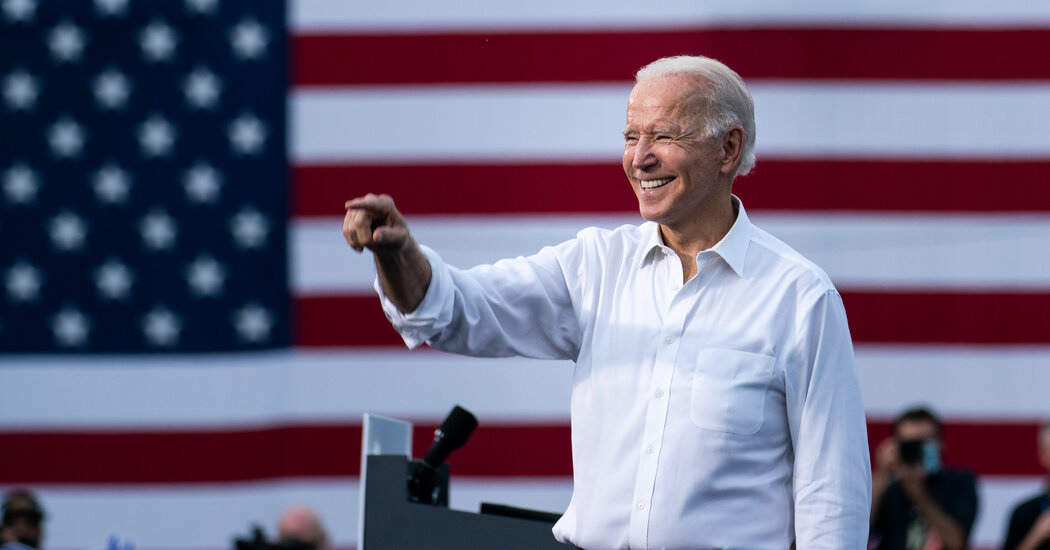 Many of our best presidents have been underestimated. Truman was seen as the tool of a corrupt political machine. Eisenhower was supposedly a bumbling middlebrow. Grant was thought a taciturn simpleton. Even F.D.R. was once considered a lightweight feather duster.

I’ve been reading Joe Biden’s speeches and I’m beginning to think even his supporters are underestimating him.

He’s walking across treacherous cultural ground, confronting conflicts that are shredding the nation, and he’s mastering them with ease.

Biden is campaigning in a country that has lost faith in itself. Sixty-six percent of Americans believe our nation is in decline, according to a study from the Institute for Advanced Studies in Culture.

He’s also running in the middle of a political and cultural civil war. Eighty-two percent of Biden voters believe that “Donald Trump would like to gradually transform our country into a dictatorship,” according to that I.A.S.C. study. Ninety percent of Trump voters believe that the Democrats want to gradually turn America into a socialist country. According to a survey conducted by Braver Angels, a group that sponsors bipartisan conversations, 70 percent of Americans believe that if the “wrong” candidate wins, “America will not recover.”

Biden is campaigning in a land filled with fear, hatred and apocalyptic thinking. It would be so easy for him to reflect that fear and hate back to voters. That’s what Trump does.

But Biden is not doing that. Never in my life have I seen a candidate so confidently avoid wedge issues. Biden is instead running on the conviction that, despite it all, Americans deeply love their country, and viscerally long for its unity. He’s running with the knowledge that when you ask America about the greatest threats to our future, “political polarization and divisiveness” comes out No. 1.

It’s easy to say you’re for healing division. But here’s what Biden has actually done:

He’s de-ideologized this election. He’s made the campaign mostly about dealing with Covid-19. That’s a practical problem, not an ideological one. Conservatives and moderates don’t have to renounce their whole philosophy to vote for him. They can just say they’re voting for the person who can take care of this.

He’s separated politics from the culture war. Over the past generation, culture war issues have increasingly swallowed our politics. Trump has put this process into overdrive. He barely talks about policies. Instead, his every subject is really about why “our” identity group is better than “their” identity group.

So now the positions people take — on issues ranging from climate change to immigration — are determined by whether they see themselves as part of the rural white Christian conservative army or part of the urban multicultural secular progressive army. Policies are no longer debated discretely; they are just battles in one big, existential fight over who we are.

But Biden goes back to the New Deal, to an era of policymaking when there really wasn’t a polarized culture war. He sidesteps the Kulturkampf issues — which statues to take down — to simply talk about helping the middle class.

Biden has scrambled the upscale/downscale dynamic. The most important fissure in our politics is education levels. The Democratic Party’s greatest long-term challenge is that it might become the party of the highly credentialed college-educated class and let some future Republican rally a multiracial working-class coalition. Even Trump is now making surprising gains among Latino and Black men.

Biden has avoided all the little microaggressions that cultural elites use to show they are morally superior. Wokeness, for example, is partly about fighting oppression, but it’s also become a status symbol. It’s showing people that you are so intellectually evolved that you can use words like intersectionality, decolonizing and cultural appropriation. Political correctness is not just a means for the less privileged to set standards of behavior; it is also sometimes the way people with cultural power push others around.

Unlike, say, Hillary Clinton, Biden has a worldview and a manner that is both educated class and working class and defuses the divide.

Biden has avoided the stupid binaries about race. Donald Trump went to Mount Rushmore and made a speech essentially saying you can either believe in systemic racism or you can love America. Biden went to Gettysburg and argued that you can “honestly face systemic racism” and love America. He argued that you can believe in fighting racism and believe in law and order. His worldview is based on universal categories — the things we share — not identitarian ones — the ways we supposedly can’t understand each other across difference.

He’s done a good job reaching out to white evangelicals. Right now, many of them think he’s a godless socialist who will usher in a reign of anti-religious terror. In his campaign he’s done a pretty good job reaching out to those voters. His campaign has run ads on Christian radio and reached out aggressively to evangelical leaders. If he can allay their cultural fears (by making it clear he will not shut down Christian charitable groups) and win them over with working-class economic policies, he can create a long-term governing majority.

Seventy percent of Americans in that Braver Angels survey say America is facing permanent harm, but 70 percent also say the most important job after the election is to heal our enmity, to do the hard job of working with people whose views we find completely objectionable. This unity impulse is powerful in the populace, but it is deeply hidden.

Joe Biden knew it was there.