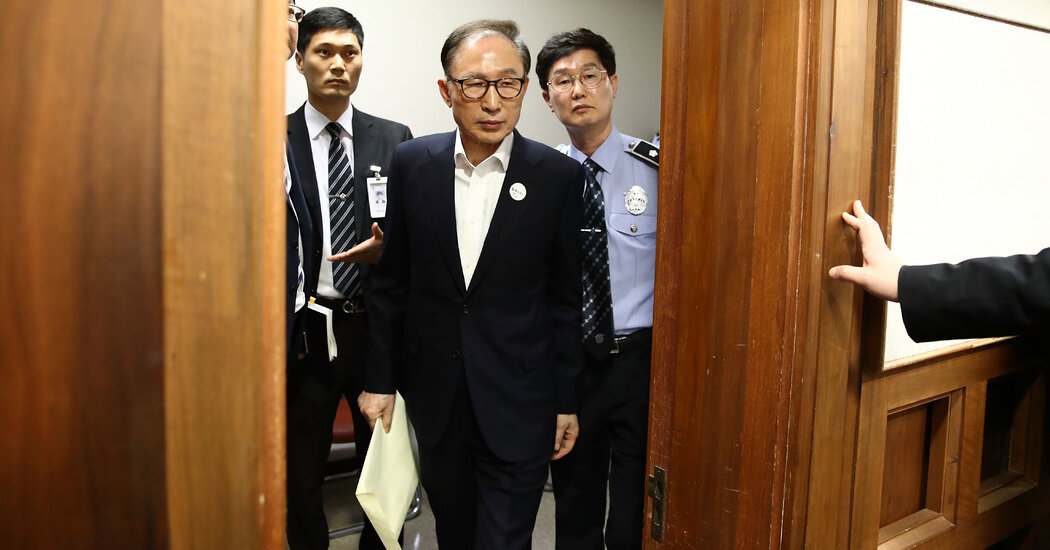 SEOUL, South Korea — ​The Supreme Court of South Korea on Thursday upheld a 17-year prison term for ​former President Lee Myung-bak ​and ordered him sent back to prison.

Mr. Lee, who was president from 2008 to 2013, ​was expected to be taken to prison in a few days, making him the second former South Korean president behind bars​ on corruption charges. Mr. Lee’s successor, Park Geun-hye, who was impeached and ousted on charges of ​bribery and abuse of power, was sentenced to 25 years in prison by an appeals court in 2018.

That same year, ​​Mr. Lee was ​arrested on bribery and embezzlement charges. He was successfully convicted in lower courts, but has been out on bail in recent months while waiting for the Supreme Court’s final say on his case, which he had appealed.

In October 2018, a Seoul district court sentenced Mr. Lee to 15 years in prison, convicting him of collecting 8.5 billion won​, or $7.5 million, in bribes from various sources — most of it from Samsung, the country’s largest business conglomerate — when he was a presidential candidate and after he took office.

The court also ​ruled that Mr. Lee, a former ​executive of Hyundai, disguised his ownership of a lucrative auto parts maker under the names of relatives and embezzled 24 billion won from the company between 1995 and 2007.

​An appeals court added two years to his prison sentence in February​, saying that the value of the bribes he had taken was larger: 9.4 billion won. ​On Thursday, the Supreme Court ​upheld the ​​verdict and the 17-year prison sentence.

Mr. Lee​, 78,​ ​collected bribes from Samsung in the form of ​lawyer fees that Samsung paid to settle a lawsuit involving the auto parts company​, known as Das​, according to prosecutors. In return for the bribes, Mr. Lee did favors for Samsung executives, including granting a presidential pardon to Lee Kun-hee, the company’s chairman, who was convicted of embezzlement and tax evasion in 2009​, prosecutors said​.

The presidential pardon of Lee Kun-hee was criticized at the time as an example of how collusion between politics and business has often allowed top businessmen found guilty of serious white-collar crimes in South Korea to walk free with light punishment. The tycoon had been forced to resign as Samsung chairman in 2008 after allegations of corruption surfaced against him, but he returned to the company’s leadership in 2010, just months after receiving the presidential pardon.

President Lee said that he had decided to grant ​the Samsung chairman special amnesty so that the businessman could retain his membership on the International Olympic Committee and lead South Korea’s bid for the 2018 Winter Olympics.

The Samsung chairman died on Sunday, six years after he was incapacitated by a heart attack.

Mr. Lee​ won the presidency by promising to use his business skills to help rejuvenate the South Korean economy. But he was dogged by allegations of corruption before and after his election.

President Moon Jae-in won the election to replace the impeached Ms. Park in 2017. Like all his predecessors, he came to office vowing to root out the corrupt ties between the political elite and the country’s family-owned business conglomerates, known as chaebol.