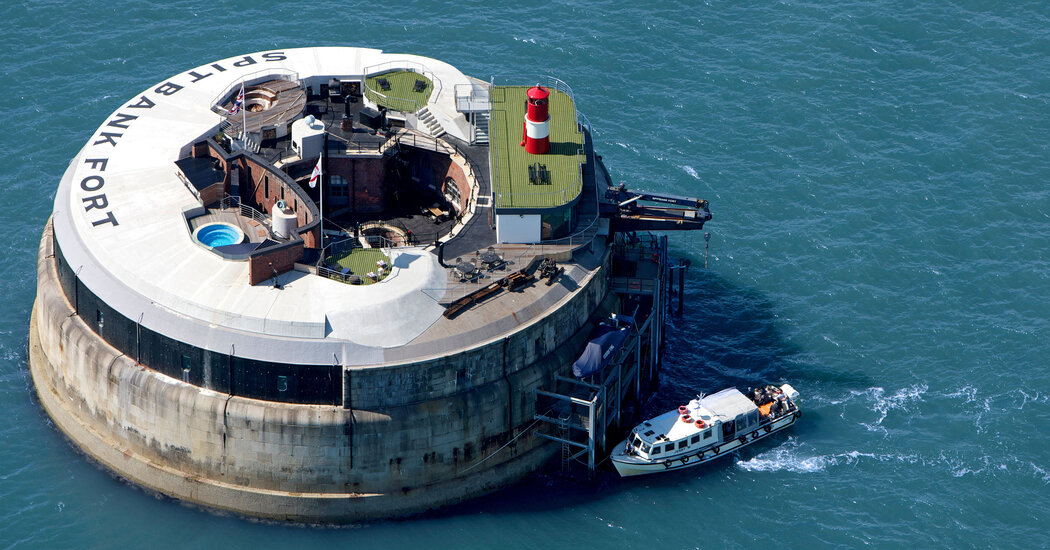 A Fortified Circle of Luxury in Portsmouth

This circular man-made island, known as Spitbank Fort, sits about a half-mile off the southern coast of England in the Solent, a narrow waterway feeding the English Channel. One of three similar islands built by the British military during the 1860s and ’70s, the refurbished fortress has 33,000 square feet of living space covering three floors, with 12 bedrooms, two kitchens, a pool, a central courtyard and multiple leisure, event and dining areas.

Spitbank Fort has played various roles since its heyday as a defense post against French ships approaching the coastal city of Portsmouth. Since being decommissioned in the 1950s, it has been a museum, a nightclub and, most recently, a boutique hotel and event space.

“When you buy into property like this, you’re buying a slice of British history which is utterly unique and truly special,” said James Mackenzie, the head of Strutt & Parker’s country department, which has the residential listing.

The fort, about 150 feet in diameter, can be maintained as a hotel or converted to a private residence, said its seller, Mike Clare, an entrepreneur and developer of unique properties. “It’s like a huge yacht,” he said. 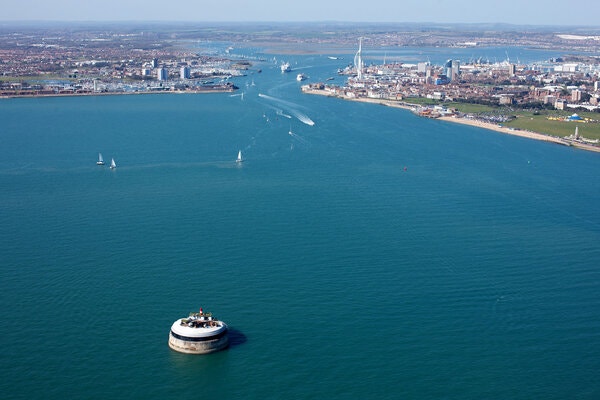 Mr. Clare bought the island in 2009 and extensively renovated it, building around its freshwater well and 15-foot-thick granite walls. A stone tunnel from the landing stage leads to the middle deck, where a central brick-walled courtyard has stairs leading up and down.

Rooms are arranged in two concentric rings around the courtyard. The inner ring has two half bathrooms, a library and a lounge, while the outer ring has eight bedrooms with en suite baths that were once gun rooms, Mr. Clare said. Today they have reclaimed polished oak floors and windows overlooking the Solent. The outer ring also has a bar, a dining room that seats 60, a commercial-grade kitchen and a functional space for crew.

The lower deck houses the fort’s historic kitchen, an intimate wine cellar and bar, staff quarters with three bedrooms and two bathrooms, and several game and TV rooms. The¸ upper level has three half baths, a sauna, two sun decks on opposite sides, a fire pit with built-in seating, and an elevated crow’s nest with a bedroom and an adjacent event room with a bar. The hot pool seats up to 18 people.

Spitbank Fort is for sale along with its two sister fortresses in the Solent. The other two are larger, at 99,000 square feet, and only one has been renovated. The trio can be purchased individually or together for 9.25 million British pounds ($12.4 million), Mr. Clare said.

The island city of Portsmouth, population some 200,000, has several historic attractions, including a dockyard with the 18th-century navy ship HMS Victory, and the Charles Dickens Birthplace Museum. Southampton International Airport is about 30 minutes from the harbor, and London Heathrow is about an hour north. 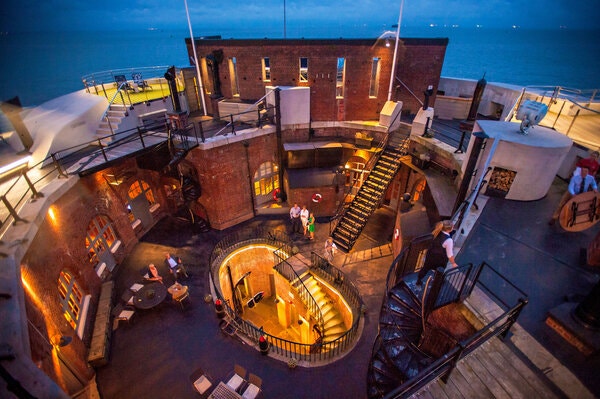 Britain’s real estate market had seen a “general slowdown” in price growth for a few years heading in to 2020, according to the Office for National Statistics, owing in part to nervousness over the looming Brexit decision. But it has seen a rebound since pandemic restrictions were loosened during the spring, said James Forbes, the head of sales of the Knightsbridge & Belgravia office of Strutt & Parker.

“The U.K. market has seen a huge growth in activity since it reopened in May,” he said.

Portsmouth has seen its own surge of interest during the pandemic, both from local and outside buyers.

Daniel Kemp, the branch manager at Portsmouth Fox & Sons, part of a national real estate chain, said residential properties are selling for 97 percent of asking price, which signals a strong market. “We have seen a lot of pent-up demand since the housing market was given the green light to reopen,” he said.

Mr. Kemp attributed that demand to a temporary reduction in stamp duty for certain properties, set to last through March of next year, as well as the extension of a government program, Help to Buy, which aims to make homeownership more accessible. Then there’s the pandemic, which has “people wanting more space to work from home or looking to move before a possible second lockdown.” One damper on the market, he said, is that lenders have been tightening credit for mortgages.

Christopher Smeed, a client director of Portsmouth-based NEXA Properties, said he has seen “high demand for all types of property” from locals and buyers coming from London, with apartment hunters especially interested in outdoor space. 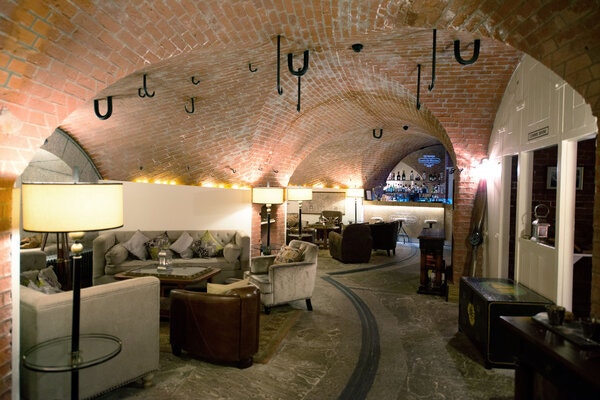 Portsmouth has long been a crossroads for sailors, naval officers and travelers, Mr. Smeed said, noting that it once had a less-than-sterling reputation. These days, he quipped, it is seeing a friendly “invasion” by foreigners drawn to its redeveloped harbor, with a 560-foot observation tower and a shopping district.

Mr. Mackenzie, of Strutt & Parker, said that England’s southern coast, already popular with vacationers, is seeing more interest from outside the region. Traditionally a draw for “wealthy domestic buyers, many of whom are buying expensive second homes,” he said, coastal properties are currently selling “quickly” and at the “heady premiums seen in late 2007.”

Demand for country houses and estates across Britain has also skyrocketed, he said: “If you compared it to this time last, year you would be amazed.”

Much of the demand, he added, is coming from London.

In central London, prices have remained stable and should remain flat through the balance of 2020, Mr. Forbes said. Year over year, transactions in 2020 should be similar to 2019, he said, but by “historic standards,” transaction levels remain low. 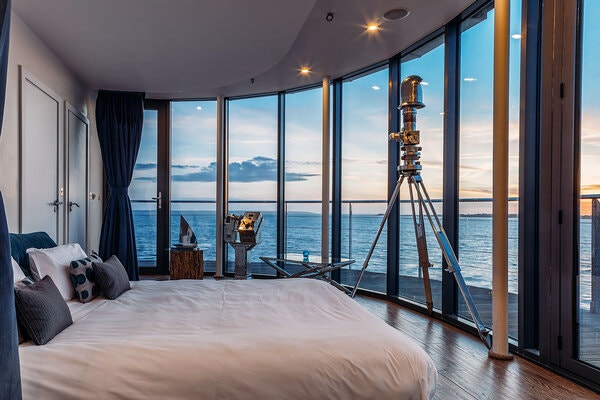 “Good, quality properties,” he said, “are still achieving very strong price points.” These homes are in short supply and are retaining value, while “compromised assets may have dropped slightly in value over the past 12 months.”

Who Buys in Portsmouth

“Before this year, most buyers were local and looking to move up in the market,” Mr. Mackenzie wrote in an email. “Coupled with this, the area was also favored by Londoners moving to or around Portsmouth with the intention of commuting on a weekly or, at a push, daily basis. Now, the buyers are Londoners looking to move out of the city full-time or purchasing big second homes.”

Mr. Kemp said most buyers of investment properties and summer homes in Portsmouth are British, though some come from Eastern Europe.

Foreigners are not restricted from buying properties in Britain. They can also get mortgages.

“It’s never easy,” Mr. Mackenzie said, “but it can and is regularly done by foreign buyers.”

Closing costs paid by the buyer include the Stamp Duty Land Tax, which is based on the purchase price and calculated in tiers. The rate is higher for a second home. For a second home that costs more than £1.5 million ($1.95 million), the charge is 15 percent, he said.

The annual property taxes for Spitbank Fort, were it converted to residential use, would be less than £3,500 ($4,600), Mr. Mackenzie said.

As Climate Disasters Pile Up, a Radical Proposal Gains Traction