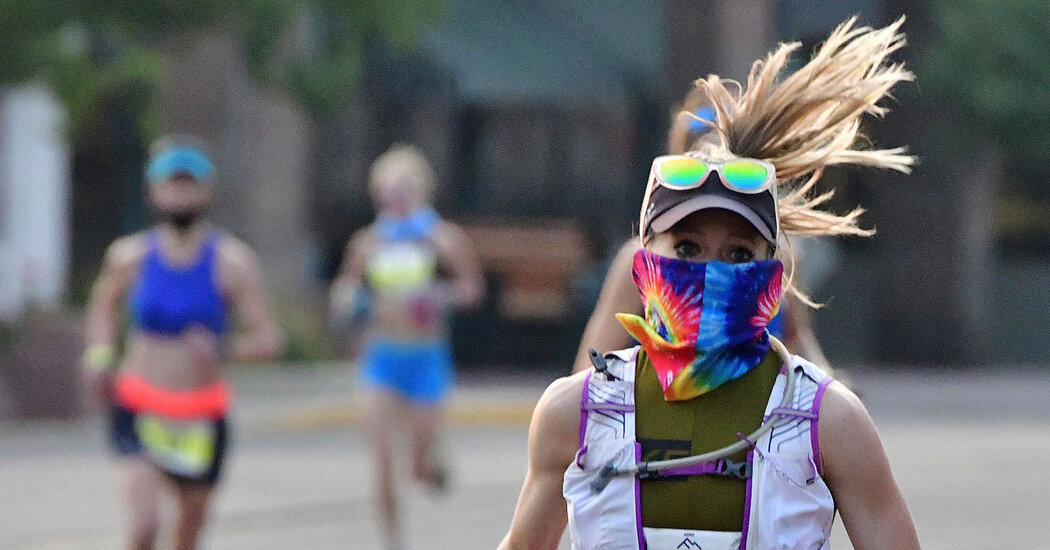 Competitive runners could soon face a familiar 2020 dilemma, as some race directors tiptoe forward with plans for in-person events, even as coronavirus cases climb again nationwide. Runners registered for these races, including me, must now decide whether we feel comfortable racing in-person and, if so, how we can best protect ourselves and the runners loping past us (or, for the speedy, vice versa).

To learn more and gather cautions and reassurance about racing safely, I spoke with race officials and infection-control researchers about starting lines, masks, the politesse of spitting, how to socially distance on the run, and what other race modifications runners should expect — or demand — at in-person events now. This is what they had to say.

“Races are not going to be the way they were,” says Todd Henderlong, the owner of Race the Region, a race series in Indiana that has been offering in-person events since May.

Race organizers should, for instance, be setting up registration and packet pickup operations that require little or no interaction with race personnel, says Saskia Popescu, an infectious disease epidemiologist who advises companies on how to respond to Covid-19. Well-spaced bins containing people’s bibs and shirts might, for example, be set up in an outside tent.

Starts will look different, too, Mr. Henderlong says. In order to keep runners socially distanced, in-person races cannot begin in the typical pre-pandemic way, with participants crowded, shoulder to shoulder, in a narrow chute, waiting for the starting horn. Instead, most races will be likely to employ some version of a time-trial start, meaning each racer receives an assigned starting time within an hourslong window, crosses the starting line alone or in company with only a few other runners and, for the most part, races solo.

Spectators are not allowed to line courses at these events, and, during shorter races, such as 5Ks (3.1 miles), there will be no water stops along the way. Even longer races, including marathons, generally now will be B.Y.O.W., Mr. Henderlong says, with racers expected to carry their own water or sports drinks and snacks. If liquids and refreshments are available on the course, they generally will consist of single-serve bottles and energy bars or gels set out on tables, ready for grabbing, without volunteers handing or hurling them to runners.

Likewise, finish-line areas will be eerily empty. No beer tents or buffet tables. No congratulatory hugs. No awards ceremony.

“For the finish walk-off, we pre-pack goody bags that include snacks, bottled water and Gatorade. Then we ask runners to leave the event area when finished running,” says Virginia Brophy Achman, the executive director of Twin Cities in Motion, which mounts the annual Medtronic Twin Cities Marathon and, until recently, offered in-person 5K races. (Its upcoming races will be virtual, because of newly rising case numbers in Minnesota.)

Hankies, Masks and Lots of Space

Runners’ racing strategies and practices also will — or should — change. Most events will require masks, for instance. “Masks are required at the event space” and must be in place for the start of the race, Ms. Achman says. “They may be removed after crossing the start line but must be put back in place after crossing the finish line.”

At the Grand Canyon Trail Half Marathon on Nov. 7, one of the few longer events scheduled to take place this fall in-person, participants will receive a neck gaiter as part of their race packets, says Randy Accetta, the race director. They must wear it or another facial covering at the start, and whenever they pass other runners en route.

Racers should plan, too, to carry a handkerchief and keep their mucus and spittle contained, says Bert Blocken, a professor of civil engineering at Eindhoven University of Technology in the Netherlands and KU Leuven in Belgium, who studies airflow, including during cycling and running events. In such races, he says, “it is well-known that saliva and snot flies around.”

Since those fluids could contain viral particles if the racer releasing them is infected, runners should not spit or blow their noses into the air, he says, and steer clear of any racers who do not comply.

In fact, distance and isolation are desirable throughout these races, he says. If you pass other runners, try to swing at least six feet wide, and preferably 15 feet or more, since respiratory particles are unlikely to float that far, he says. And avoid drafting behind other racers; their expired air congregates in the shoulder-wide slipstream behind them.

Of course, even with precautions in place, in-person racing cannot be risk-free. If you have concerns, consider contacting the race director and asking about race protocols, says Johanna Goode, the marketing director at RunSignUp, a company that handles registrations and other services for races around the country. Or “see if the race has a virtual option that will allow you to decide how to participate closer to the race date,” she says.

Some runners also may feel disheartened by the limits of today’s races. “We’ve had runners tell us they miss head-to-head racing,” Mr. Henderlong says. They mourn the loss of group sprints to the finish, “and having family cheering them on, high-fives, all of that.”

But Mr. Accetta believes that despite the limitations, in-person racing retains an allure that on-your-own, virtual racing may be unable to match.

“There is this sense of community when you share the same course,” he says. “You’re running together, even if you’re socially distanced.”

Tags
Line Other Part Start You

Yes, You Can Learn to Speak the Language of Plants