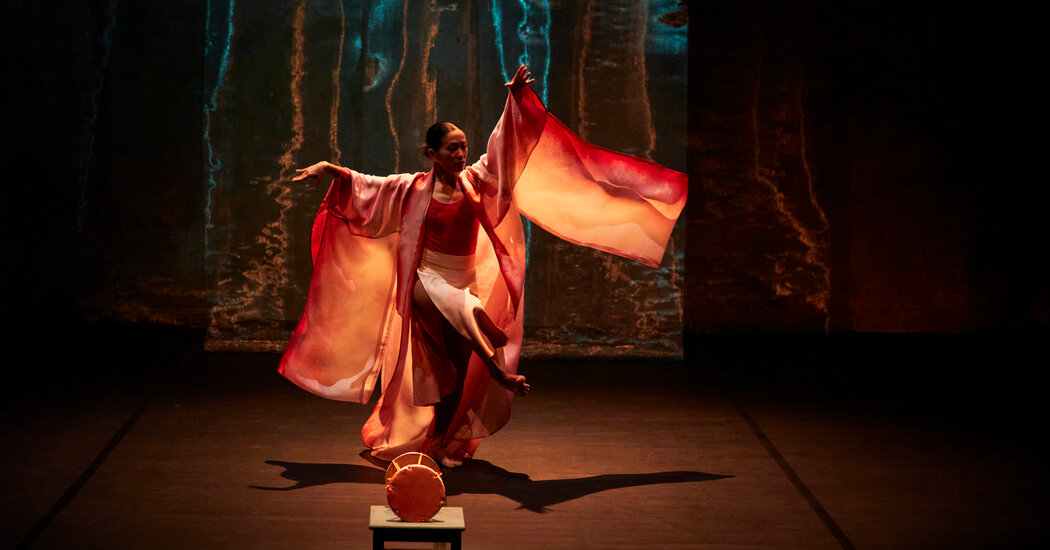 AVIGNON, France — Festivalgoers who cross the medieval ramparts of Avignon are used to being greeted with a riot of activity. Every July, thousands of posters cover the city’s walls to advertise stage productions as the official Avignon Festival and its Fringe compete for attention. Seemingly every street corner brings hopeful performers ready to pitch their work to passers-by, day and night.

Not this year. Like so many other events, France’s biggest theater celebration was canceled because of the pandemic, leaving the city and local businesses with a major revenue shortfall. As some consolation, the director of the festival, Olivier Py, rescheduled seven of the productions originally planned for the 2020 edition over a week in late October.

The name he picked for this surrogate festival had historical resonance: “A Week of Art in Avignon” was the event’s original moniker upon its inception in 1947. At the time, its founder, Jean Vilar, staged just three productions around the city. While many of this year’s attendees could be heard complaining about the dullness of Avignon in the fall, the low-key atmosphere was certainly much closer to Vilar’s vision than the juggernaut — over 1,500 Fringe productions were presented last year — that usually overwhelms locals.

Still, looking back, Py and his team are likely to curse their timing. With confirmed Covid-19 cases surging again in France, a 9 p.m. to 6 a.m. curfew was announced in the region of Avignon the day before the Week of Art was to start. Like most theaters in Paris and other major cities, the festival opted to work around the regulations. All start times were simply moved forward by three hours, to allow audience members time to get home before curfew started.

It wasn’t enough for some shows. First, one production, Yngvild Aspeli’s “Moby Dick,” was canceled when a case of coronavirus was confirmed in the creative team. Then, midway through the week, the French government announced a new nationwide lockdown, meaning that the festival was cut short.

Yet some live shows did happen, across multiple venues in Avignon. Perhaps any review should include a mention of the herculean amount of planning, precautions and uncertainty that getting to the stage currently involves. Critics would be remiss to ignore the wider theater landscape: When an industry is fighting for survival, the aesthetic shortcomings of a lighting choice start to seem less consequential. 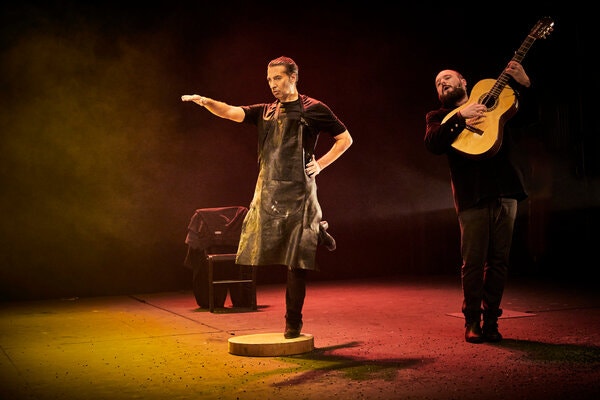 The best works, on the other hand, felt like underdog victories, gratifyingly snatched from the jaws of new restrictions and shutdowns. Over the first few days of the Week of Art, dance came out on top, with scintillating performances from the dancers and choreographers Israel Galván and Kaori Ito.

Galván, 47, is one of a generation of flamenco stars who have pushed the genre into contemporary territory. He has incorporated such unlikely elements as Indian kathak, feline co-stars and robots into his work over the years, at times with unwieldy results. Happily, he went back to basics in “Mellizo Doble” (which translates as “Twin Double”), with 80 minutes of dance, song and little else.

The “twin” of the title was the singer Niño De Elche, who brings the same spirit of experimentation to flamenco music that Galván does to choreography. Watching them was akin to eavesdropping on a dialogue so intricate and fast-paced that details whizzed past the eye and the ear. While De Elche put whimsical or modern twists on popular flamenco songs, Galván stomped barefoot and in gravel, alternately muffling and amplifying the familiar sound of his footwork.

The flamenco star’s mastery of lines and angles was on full display in “Twin Double,” with sharp upper-body work occasionally reminiscent of vogueing. His sense of humor also peeked through: One percussion scene, in which he and De Elche harmonized using teeth chattering and breast-beating, earned an enthusiastic encore during the curtain calls. 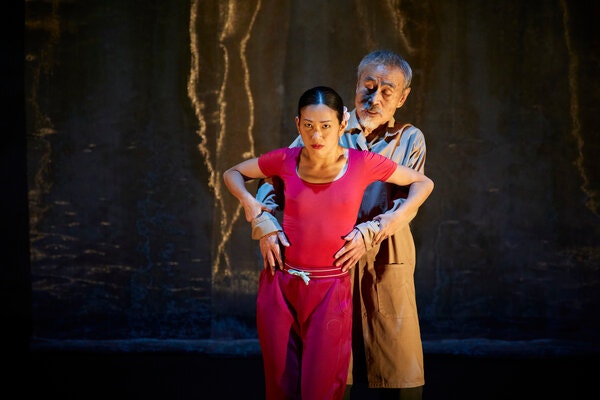 Ito’s “The Damask Drum. A Modern Noh” (“Le Tambour de Soie. Un Nô Moderne”) didn’t quite reach the same heights, but its two main performers proved a fascinating pairing. The Japanese-born Ito has become a versatile headliner within France’s contemporary dance scene, and she teamed up here with the 87-year-old Yoshi Oida, a trained actor known for his collaborations with the director Peter Brook.

Inspired by the 15th-century Noh play “Aya no Tsuzumi,” “The Damask Drum” portrays a cruel young dancer making a fool of an older janitor. Elements of traditional Japanese theater are combined with grounded floor choreography, in Ito’s case, and with Oida’s tongue-in-cheek physical precision. While the story was underdeveloped by the end, their intergenerational dynamic was unusual enough to sustain the hourlong show.

“A Game of Shadows” came courtesy of the wordiest playwright working in the French language, Valère Novarina, who has elevated non sequiturs and neologisms into an art form. His long lists of imaginary colors and birds have their aficionados, as does Morin’s slant on classic plays.

For “Endless Andromaque,” Morin required four actors to learn Racine’s 17th-century tragedy “Andromaque” in full, toss a coin to determine the roles they would take on every day, and then race through the play as fast as they could utter classical alexandrines. For many French speakers, Racine’s verse isn’t easy to understand at the best of times, so this was anything but an inclusive choice.

There were performances to treasure nonetheless. Since “The Game of Shadows” was partly inspired by the myth of Orpheus and Eurydice, Bellorini wove extended excerpts from Monteverdi’s opera “L’Orfeo” into the text. One 18-year-old singer, Ulrich Verdoni, took my breath away with the distinct, unalloyed texture of his voice in the aria “Tu se’ morta.” In “Endless Andromaque,” Sonia Hardoub adapted to Morin’s brisk pace like a seasoned star, even switching back and forth between the roles of Andromaque and Orestes. 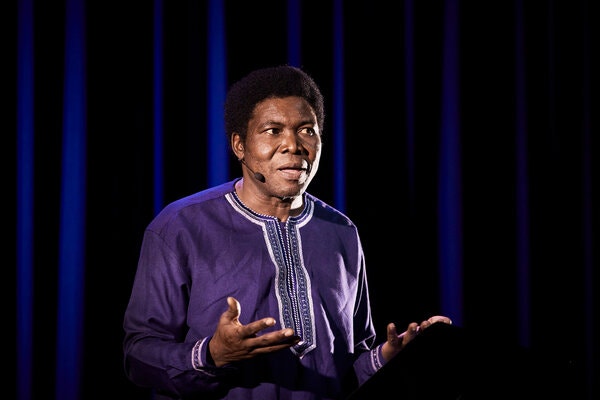 And there was one show I will remember gratefully in the coming weeks of lockdown. In “Traces. A Speech to African Nations” (“Traces. Discours aux Nations Africaines”), by the Senegalese writer and scholar Felwine Sarr, a man stands alone at a lectern, addressing the audience — and, by implication, the African continent — much like a diplomat.

In the role, the Burkinabe actor and director Étienne Minoungou joked with the audience about masks and the curfew, smiled warmly — and proceeded to deliver a stunning retelling of African colonial oppression. It was capped with a call not to arms, but to rebirth and hope.

Anger would have been justified, but instead Sarr and Minoungou opted for the communality of poetry. “Life passes, but we are here to prolong its radiant grace,” Minoungou said as “Traces” drew to a close. Fleetingly, my own pent-up frustration eased; fleetingly, Avignon worked its magic again.

Travis Roy, Who Inspired Millions After a Hockey Tragedy, Dies at 45

Our Beautiful, Wet Moon in the News