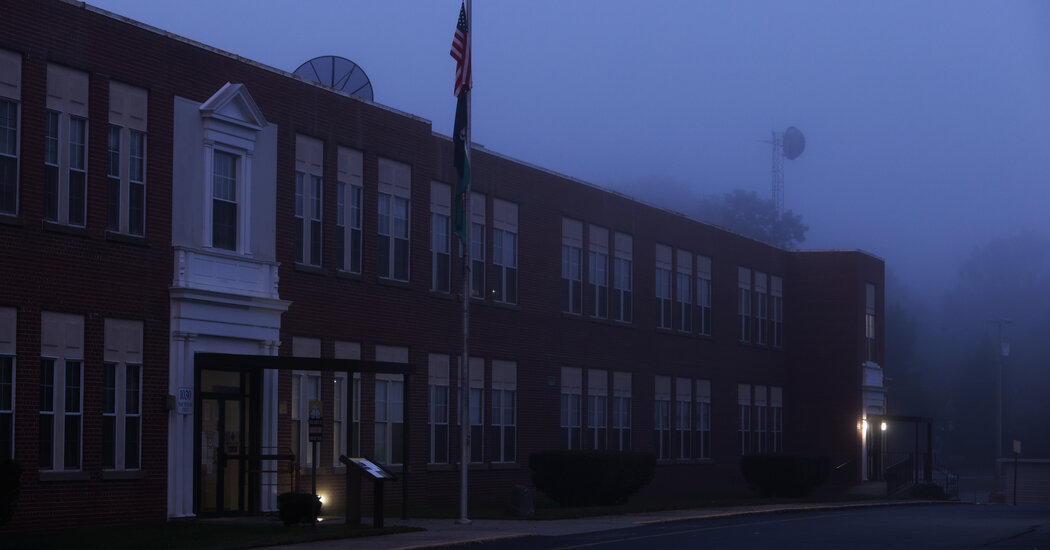 HALIFAX, Va. — The board of supervisors meeting in September opened with the familiar liturgy of local government: the prayer, the Pledge of Allegiance, the roll call. The chairman was recognized for completing a course for public officials. “Constitution Week” was hereby proclaimed.

About fifteen minutes in, Ricky Short motioned for approval of Resolution 2020-27.

Whereas the Virginia and U.S. constitutions speak of a “well-regulated militia,” it read, whereas a militia should be trained with arms “including modern semiautomatic rifles,” whereas a militia was “the last best hope” when liberties are threatened by “a tyrannical government,” then be it resolved: Halifax County would support a local militia. Ronnie Duffey seconded the motion.

Throughout one of the most tumultuous political years in memory, armed paramilitary groups have marched: crowding into statehouse galleries, violently defending public monuments and now planning to show up at the polls on Election Day. Some of these groups have a national network and muster under the self-proclaimed pedigree of “militia,” while others are makeshift, assembling for a night or two of confrontation in the streets and then disbanding just as quickly.

In Virginia over the past year, a number of rural counties have mulled resolutions that would officially endorse the assembly and training of local militias. At least three counties have approved them.

The triggering event for these came last November, when Democrats won full control of the state government pledging an ambitious gun control agenda. In the winter of outrage that followed, gun owners poured into Richmond, crowded county board meetings and formed paramilitary groups in one county after another.

Gun rights supporters say 91 of the state’s 95 counties, and many cities and towns, have passed what they call second amendment sanctuary resolutions forbidding enforcement of certain gun laws and declaring, at least symbolically, that the state’s authority in some matters stopped at the county line.

But not everyone saw this fight as just about gun policy. It was also about power. 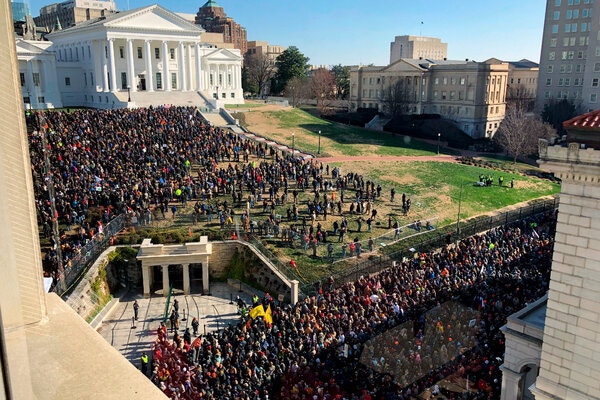 Virginia had long been reliably conservative, governed by an old Southern politics that ranged from the right to the center but rarely too far beyond. Republicans had control of the governor’s office or the legislature or both for over a quarter century, if not calling the shots at least impeding the opposition.

But as tobacco farms and textile mills steadily disappeared, hollowing out rural counties, the suburbs stretching southward from Washington, D.C., spread out like Virginia creeper, fed by culturally liberal college graduates from all over the world. Elections fully caught up to growth patterns in 2019. Conservatives suddenly found themselves out of power.

“Virginia is not the Virginia it used to be,” lamented John Sharp, a supervisor in Bedford County, which passed a militia resolution in May. “We’re outvoted.”

It could be that way for a long time. And if the current polls are right, it could soon be that way in Washington, too, leaving the right with a hold on the courts and little else. Some are preparing.

“Biden’s coming for us; there will be a war,” said Paul Cangialosi, who works with the Virginia Militia Alliance, created after last year’s election to organize armed groups across the state.“We don’t fix this at the ballot box, I hate to say it. We’re too divided.”

Gun control, anti-coronavirus lockdowns, talk of a vaccine mandate: Mr. Sharp described it all as if it were an imposition by a remote colonial power.

That is where militias come in.

The legal theory is this: the Virginia constitution speaks of a “well regulated militia, composed of the body of the people, trained to arms.” If a county were to endorse the right of local residents to assemble and train as a militia — even if it granted no other special powers or duties — wouldn’t that give people firmer legal standing to challenge gun laws?

A few places have tried this, said Mark Pitcavage, a researcher with the Anti-Defamation League, including some counties in Florida in the mid-1990s, but nothing came of it. The law is plain.

“Neither in Florida nor in Virginia do counties have the power to do this,” Mr. Pitcavage said. “The power to organize the militia is firmly divided between the federal government and state governments.”

Over lobster mac-and-cheese at a restaurant in Lynchburg, Va., Wes Gardner and Dan Abbott, leaders of the Bedford County militia, dismissed legal objections.

First they made some clarifications. The armed groups that formed across Virginia over the winter and spring were not like the extremist militias of the 1990s, Mr. Gardner insisted, nor were they white supremacist. He is in contact with some harder-edged national groups, like the Oath Keepers, he said, but he likened the typical county militia in Virginia to a “community watch”— albeit one that is also armed to fight government tyranny. 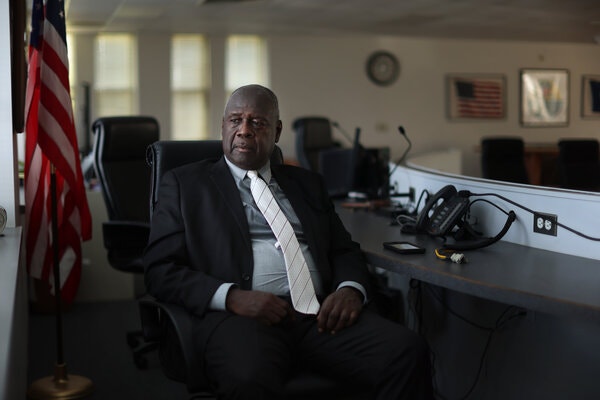 The founders saw militias, Mr. Abbott explained, as preventing “governments who had the majority from being able to impose their will on people who didn’t want their will.”

“You have huge population densities in a very small geographic percentage of the state,” he said of Virginia’s current political dynamics. They do have a majority of the votes, he granted. But that does not give them free rein. “Government exists to protect the minority’s rights.”

“As Virginia goes,” he said, “so goes the country.”

After the militia resolution was introduced in Halifax County, the board opened for discussion. First to speak was W. Bryant Claiborne, 65, one of the three Black members of the eight-man board.

“If we do this tonight, what we’re doing is we’re just provoking or enhancing the possibility that we’re going to have civil unrest,” he said, talking of the fatal shootings at the August protests in Kenosha, Wis.

It was at a protest in early June where the Halifax County Militia made its public debut. A high school senior, Nevaeh Hodges, had organized an antiracism demonstration on Constitution Square in South Boston, the biggest town in the county. Hundreds came; the sheriff spoke, as did the city police chief. And on the sidewalk nearby stood a dozen or so men and women wearing black shirts and holding rifles. 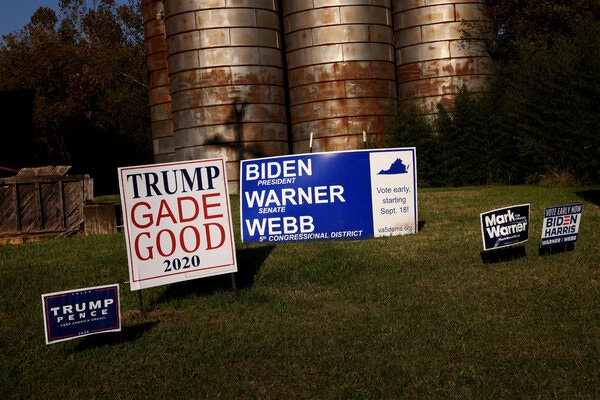 The group at that point was over three months old, according to Mitzi Thompson, an electrical engineer and Army veteran who describes herself as the militia commander. They had first gathered in a cold field in February, when “militia musters” were being held across Virginia. After word of Ms. Hodges’ rally spread, along with rumors that busloads of antifa were on their way from Richmond, Ms. Thompson called the group into action.

She told Ms. Hodges that the militia was there to protect the protest as well as the town (antifa never showed). But Ms. Hodges was skeptical, as were other Black people in town. Their suspicion deepened when Ms. Thompson, a fervent Trump supporter, spoke at a county meeting against the removal of a local Confederate statue, declaring that Virginia fought in the Civil War for freedom, not slavery.

Ms. Thompson said that speech and a pro-police rally she organized drew more interest in the militia, though she refused to say how many people were members. She insisted that it was focused primarily on things like search-and-rescue operations, differentiating it from extremist groups like the one that planned to kidnap the Michigan and Virginia governors; in a Facebook post, she derided those plotters as “anti-government liberals.”

At the September board meeting, Ms. Thompson was invited to explain further.

“The militia already exists here,” she began. “We’re not asking for permission to do that. We already have permission from the Constitution.”

The resolution, she said, was simply an invitation for the county to work with the militia, and to forbid any laws, like assault weapons bans, that would interfere with the training of its members. “I take the time to teach them proper safety,” she said. “So that if the day ever comes that they have to defend themselves, they make sure they’re shooting the right one.”

The board, during the discussion, seemed receptive.

“Wouldn’t it be nice,” said Mr. Short, “if we get violence happening in the next 10 minutes, to have a local militia to call up while we wait on the national government to get the National Guard, helping the police to protect our properties, our citizens from harm’s way?”

Another supervisor, Jeffrey Francisco, chimed in. “Seems like to me it’s a group that wants to help our community,” he said, pointing out the recent pro-police rally. “Unfortunately, our world is getting in worse shape; people are crazy and drugs and meanness and everything else.” 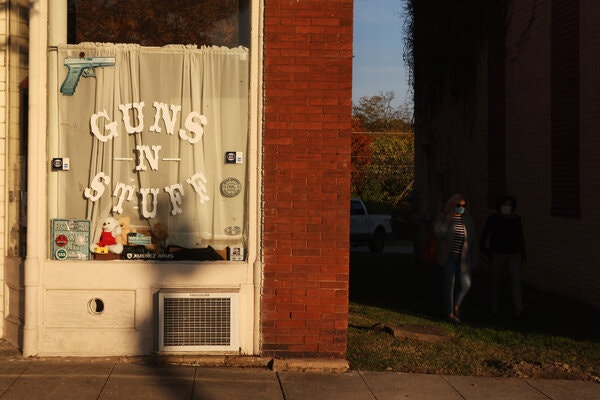 To Mr. Claiborne, this resolution looked like it was passing. He found the timing of it — the notion that people now, in 2020, needed their rights protected from an oppressive majority — telling. Growing up Black in Halifax County, he had to sit in the balcony at the movie theater and walk to the segregated Black elementary school to the sounds of racist jeers from passing school buses. The very building where the board meets was once the Black high school; they were sitting on this night in what used to be a school library stocked with secondhand books.

“They’re fighting for what they have,” Mr. Claiborne said a few weeks after the meeting, in his home off a quiet road that runs past a prison and an old plantation. “This is not just local now, this is nationwide. The people in power are trying to maintain power and they are organizing now to try to keep power.”

“They see the changes coming,” he said, suspecting all of this would intensify should Mr. Trump lose.“It reminds me of secession.”

A half-hour into the board’s discussion, Garland Ricketts, a white man and the oldest member of the board, also sensed that the resolution was headed for approval.He had a bad feeling about it, too. If anything, rural Virginia needed more attention from the people now in power, he believed, just attention to the right things: roads, schools, economic development.

“I don’t think were ready for this,” Mr. Ricketts said, and he motioned to table the resolution for the time being.

Nearly two months have passed.After the October meeting, where the resolution remained tabled, Ms. Thompson invited some of the outspoken Black critics to join the militia.Several Black people in the county, including Ms. Hodges’ mother, meanwhile, announced plans to organize their own militias if the measure were to pass.

The board now appears to have reservations. Mr. Francisco said recently he would be surprised if the matter came up again.Ms. Thompson is not giving up and has encouraged her followers to show up in support at the next board meeting. That will be on Nov. 2, the night before the national election.