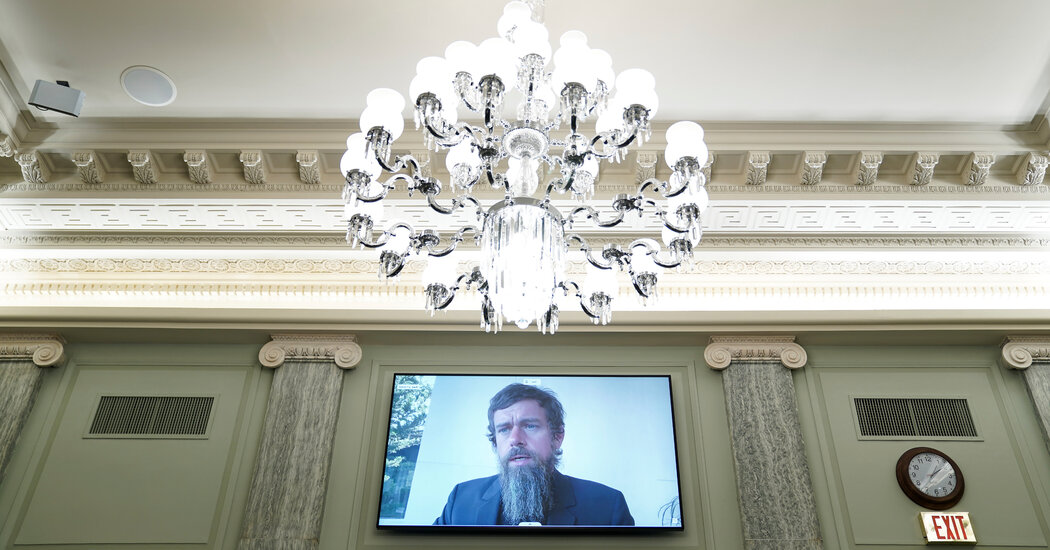 WASHINGTON — Lawmakers hammered the chief executives of Twitter, Facebook, Google and one another at a Senate hearing on Wednesday, with Republicans claiming the companies were suppressing conservative views while Democrats accused their colleagues of holding a “sham” hearing for political gain.

For nearly four hours, members of the Commerce Committee pelted Twitter’s Jack Dorsey, Facebook’s Mark Zuckerberg and Google’s Sundar Pichai with more than 120 questions about social media speech and the harm caused by their platforms, often framing their attacks through the lens of next week’s election.

But unlike previous tech hearings, this one put the partisan divide on full display. Republicans attacked Twitter and Facebook for what they said was censorship of posts by conservative politicians and for downplaying a recent New York Post article about Hunter Biden, the son of the Democratic presidential nominee, Joseph R. Biden Jr.

“Mr. Dorsey, who the hell elected you and put you in charge of what the media are allowed to report and what the American people are allowed to hear?” Senator Ted Cruz of Texas asked.

Democrats countered that Republicans had concocted the hearing to pressure the companies into going easy on them before Election Day.

“It’s a sham,” Senator Brian Schatz of Hawaii said. Senator Amy Klobuchar of Minnesota said Republicans were politicizing “what should actually not be a partisan topic.” And Senator Tammy Duckworth of Illinois said they were “placing the selfish interests of Donald Trump ahead of the health of our democracy.”

The theatrics, which often devolved into shouting, meant that the topic of the hearing — the future of a legal shield for online platforms — was barely debated. The event had been billed as a discussion about Section 230 of the Communications Decency Act, a law that protects social media companies from liability for what their users post and is regarded as sacrosanct by the platforms.

Washington’s efforts to take on large tech companies in recent months have largely been bipartisan. Last week, Democrats and Republicans cheered a Justice Department lawsuit that accused Google of breaking antitrust law while protecting a monopoly over its internet search service. And lawmakers from both parties have pushed for new regulations to be applied to the tech companies.

But the hearing’s barbed exchanges pointed to how the debate over online speech has become increasingly divided, with the companies caught in the middle. Of the 81 questions asked by Republicans, 69 were about censorship and the political ideologies of the tech employees responsible for moderating content, according to a tally by The New York Times. Democrats asked 48 questions, mostly about regulating the spread of misinformation related to the election and the coronavirus pandemic.

“I don’t know what changes could be made that would satisfy everyone,” said Jeff Kosseff, an assistant professor of cybersecurity law in the United States Naval Academy. “You’re seeing two very, very different worldviews.”

Wednesday’s hearing came together after months of protest by President Trump and Republican lawmakers over actions by the tech companies to label, remove and limit the reach of posts. Twitter started labeling posts by Mr. Trump in May for being inaccurate and for glorifying violence. Mr. Trump retaliated that month with an executive order aimed at stripping social media companies of the Section 230 legal shield.

His allies in Congress have since piled on, with the Senate Commerce Committee’s Republican leadership threatening to subpoena Mr. Dorsey, Mr. Zuckerberg and Mr. Pichai to discuss Section 230. Democrats, who have been angered at the companies for allowing hate speech and political misinformation to spread, also agreed to the hearing.

Conservative claims of censorship online are based largely on anecdotal examples of right-wing commentators or lawmakers whose content was moderated by social media platforms. But many conservative personalities have built enormous audiences on the platforms, and lawmakers did not offer evidence that systemic bias was built into the companies’ products.

For the tech executives, appearing on Capitol Hill has become routine. Wednesday’s hearing was Mr. Zuckerberg’s fifth time testifying in front of Congress since April 2018; it was the third time for Mr. Pichai and Mr. Dorsey. All three testified over video feeds because of the pandemic, with Mr. Zuckerberg briefly experiencing a technical glitch at the start of the event.

Mr. Dorsey bore the brunt of questions, with Republicans asking him almost four dozen times about alleged “censorship” of conservative politicians and media outlets. He was asked 58 questions in total, more than the 49 for Mr. Zuckerberg and 22 for Mr. Pichai, according to the Times tally.

“Mr. Dorsey, your platform allows foreign dictators to post propaganda, typically without restriction,” said the Commerce Committee’s chairman, Senator Roger Wicker of Mississippi. “Yet you typically restrict the president of the United States.”

Mr. Dorsey replied that Twitter had taken actions against leaders around the world, including Mr. Trump. “As we think about enforcement, we consider severity of potential offline harm, and we act as quickly as we can,” he said.

Democrats asked Mr. Zuckerberg about how Facebook was protecting against interference in the election. He said the company had spent billions of dollars on election security, and promised to push back against foreign disinformation targeted at the political process. He also faced questions about how the service was combating extremism online. 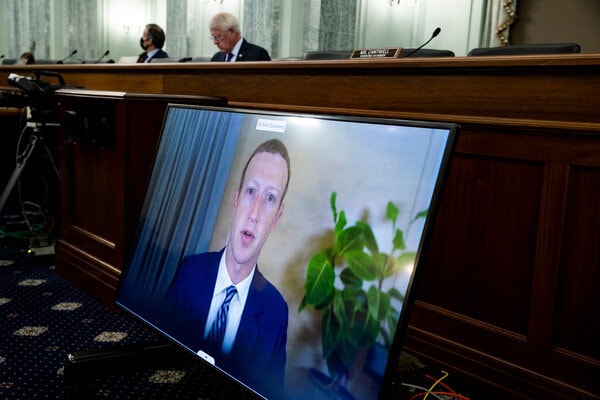 Mr. Pichai emerged largely unscathed. Ms. Klobuchar, who has proposed changes to antitrust law, questioned him about whether Google was too dominant.

“We do see robust competition in many categories of information,” Mr. Pichai said.

The attacks left little time for substantive discussions about revising Section 230. In one exception, Senator Deb Fischer, a Republican from Nebraska, asked Mr. Zuckerberg about what changes he would like to see in Section 230 on content moderation. He said he wanted more transparency around how content was moderated, to help build trust among users.

Senator Shelley Moore Capito, a Republican from West Virginia, also asked the tech leaders about a clause in the statute that protects companies from liability for restricting access to content that they deem “obscene, lewd, lascivious, filthy, excessively violent, harassing or otherwise objectionable.” She asked whether they would be in favor of redefining the phrase “otherwise objectionable.”

All the chief executives said they supported keeping the phrase. Mr. Pichai said it was important because it provided the companies with flexibility to take action in situations that were never considered when the 1996 law was written, such as when children started eating laundry detergent pods as part of a challenge to others.

Despite bickering within the hearing, Republicans and Democrats are expected to continue the drumbeat for changes to Section 230 in the next Congress.

Before then, Mr. Zuckerberg and Mr. Dorsey are likely to appear before Congress again. Both have agreed to testify at a Senate Judiciary Committee hearing next month on how their companies handled election content.

U.S. to Establish Embassy in the Maldives