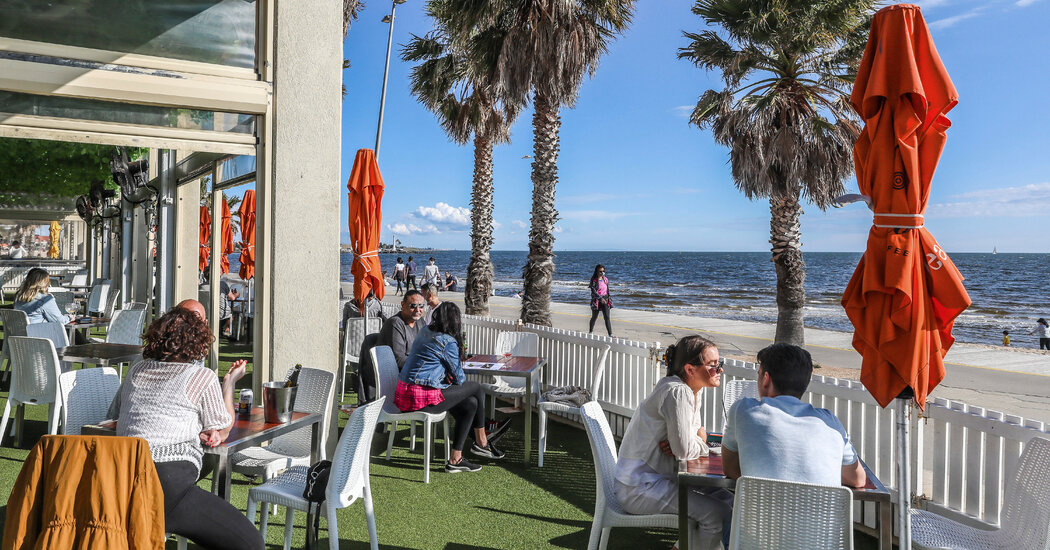 MELBOURNE, Australia — As if from hibernation, Australia’s second-largest city emerged from one of the world’s longest and most severe lockdowns on Wednesday, feeling both traumatized and euphoric after weeks of shared sacrifice that brought a deadly second wave of the coronavirus to heel.

It took 111 days, but Melbourne and the surrounding state of Victoria recorded no new infections on Monday, and on Wednesday thousands of stores, cafes, restaurants and beauty salons opened their doors for the first time in months.

“That is an achievement that every single Victorian should be proud of,” said the state’s top official, Daniel Andrews.

The collective exit for a city of five million came suddenly and none too soon — Mr. Andrews had insisted on a very low threshold of cases before lifting the lockdown. It ended a dizzying and lonely experience that many in Melbourne described as an emotional roller coaster with effects on the economy, education and mental health that will linger.

The turnaround since July has been dramatic: Infections at the time were threatening to spiral out of control, hitting a peak of more than 700 a day. Schools, businesses and houses of worship closed. People could not travel more than three miles from home without a permit. They could go outside for only an hour (then two), and for weeks, they faced a nightly curfew.

Now, Victoria has subdued the virus while European countries that had similar caseloads a few months ago — and that ended their lockdowns after overcoming initial waves of infections — are struggling with an explosion of new cases. The hard-won success has allowed people in Melbourne to re-enter their city, Australia’s capital of coffee and culture, even if they are unsure how tense or loose to be. 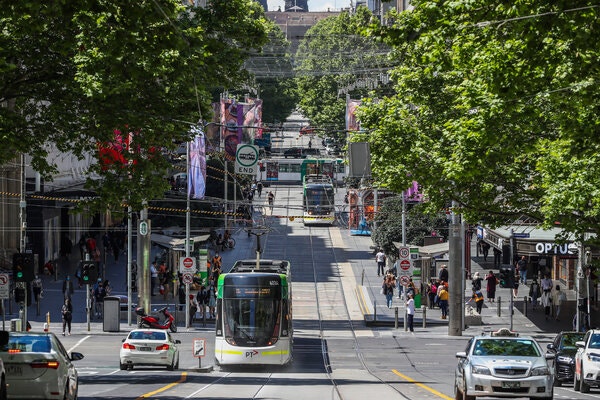 “Is there enormous relief? Absolutely, enormous celebration, yes,” said Dr. Stephen Duckett, the health program director for the Grattan Institute, a policy think tank based in Melbourne. “But none of us want to go through this again, so we also know we have to be cautious.”

The situation in Europe, where countries like France and Britain are recording tens of thousands of new cases a day, helped people in Victoria maintain their patience through the lockdown. The comparison, though, highlights very different political calculations, neither of which may be the ideal course.

Britain under its Conservative prime minister, Boris Johnson, may not have done enough in recent months as the virus gurgled along in the population. Mr. Andrews, a Labor Party leader running a state that veers left, may have gone further than needed with the curfew, restrictions on time outdoors and the three-mile limit on travel.

“What gets me is that there seem to be two extremes; we keep everything locked down completely, or we don’t do anything,” said Dr. Peter Collignon, an infectious diseases expert at the Australian National University. “Both extremes are wrong.”

He added that Australia’s most populous state, New South Wales, along with Japan, Singapore and South Korea, had all maintained low levels of infection through the public’s compliance with common sense measures, such as staying home when sick and minimizing group interactions indoors.

Shifting social norms, he added, matter most. “The people have to be convinced,” he said.

In Victoria, whether convinced or not, they obeyed. Only a handful of small protests disrupted the lengthy lockdown. Though critics plastered Mr. Andrews with the nickname “Dictator Dan,” many others insisted that “Dan’s the man.”

A poll published earlier this week showed that 52 percent of Victorians approved of Mr. Andrews’s performance as premier.

“I think it’s hard to think of another community anywhere else — I think internationally as well — that’s been so stoically accepting of the very strict restrictions they faced,” said Paul Strangio, a professor of politics at Monash University in Melbourne. “They’ve made a decision, Victorians, that health had to be put first.”

All over Melbourne on Wednesday, people crawled out of their homes to seek a version of the lives they had put on hold. 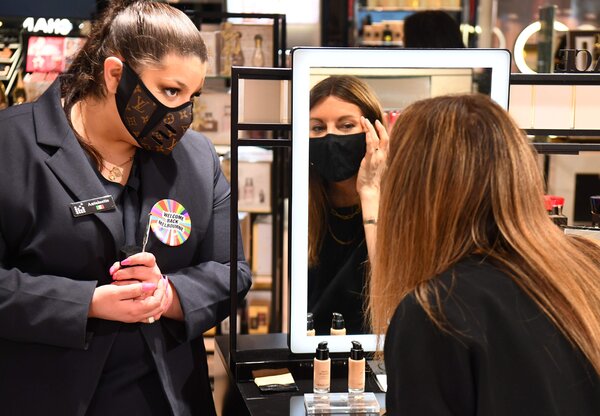 The early adopters appeared at midnight inside the handful of bars across the city that opened at the exact moment they could. At Cherry Bar, a hole-in-the-wall rock venue, 20 people (the legal limit for now) ordered drinks and swapped lockdown stories.

“It feels surreal,” said Ryan Gribble, 37, who was a regular patron before the pandemic. “It feels like the bar’s shut and only the regulars are left drinking — but it’s actually open.”

“It’s like this tiny little flower that’s just sticking out one petal at a time,” he added.

At Nick and Nora’s, a cocktail bar nearby, the scene was more festive. People paid 65 Australian dollars ($46) for a celebration complete with Champagne. Some of the women wore cocktail dresses, and some of the men wore suits.

Greg Sanderson, the bar’s co-owner, said tickets sold out in two hours. Asked how he felt, he said: “Tired.” It had been a while since he’d stayed up so late. There were energy drinks in the fridge, but he was not yet optimistic.

“We’re going to lose money from tonight, 100 percent,” he said. “Hopefully in two weeks’ time we will not lose money when restrictions start to ease.”

As the sun rose and Melbourne greeted its first day with the freedom to stretch a little, the city’s mood seemed to improve.

In most of the parks, people gathered in clusters, sharing picnics with friends they had not seen in person for months. Those not eating wore masks.

In Princess Park, Stephanie Trezise, 26, an immunology student, was busy sharing beer and cheese with four friends. She used to see them at lunch all the time. Wednesday was the first time they had all been back together since the lockdown began. 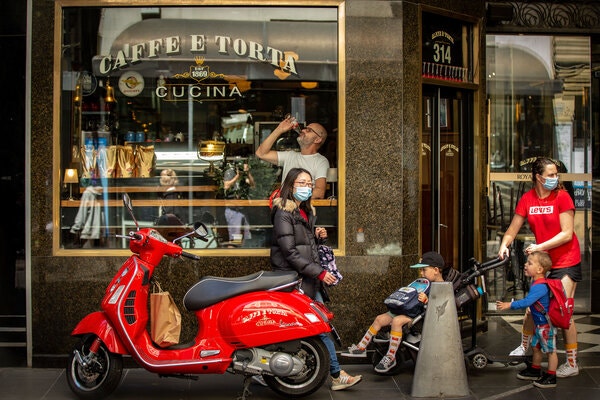 “A lot of us had major milestones in our studies — finishing a thesis, giving a final seminar, and we couldn’t celebrate until today,” she said.

Many others on the grass nearby expressed a similar urge. To catch up. To raise a glass.

“It’s so exciting,” said Maud Rowe, 35, who was sitting with a friend she had not seen in months. “I wanted to hug her, but we’re not allowed.”

In the central business district, many of the storefronts were still dark. A few looked emptied out, hinting at bankruptcy. Shoppers who found open doors rushed to and fro.

For some, just the act of going into the city felt empowering, and the revived bonds worth appreciating were the loosest ones of all.

Nikki Fisher, stepping out of a department store, said that even just the noise of construction filled her with energy.

Most of all, she added, she savored the casual chats with strangers.

“How could you not have a chat to your hairdresser?” she said. “The person doing your eyebrows? It’s great to get back into that socialization again.” 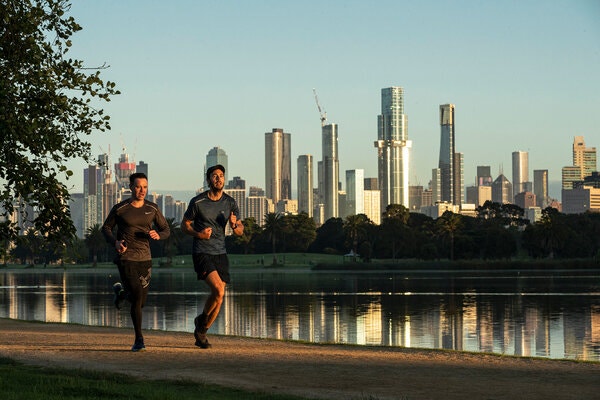 Tags
Had Lockdown Melbourne Not Time

A Princess, Long Denied by Belgium’s Former King, Meets With Her Father