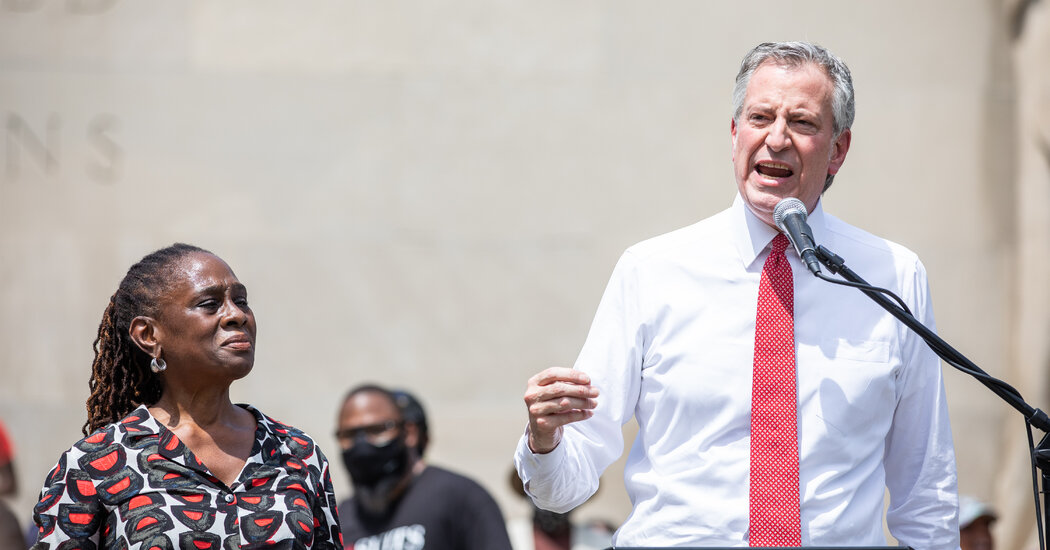 Like a guy who has ignored his wedding anniversary long enough for his wife’s contempt to curdle to indifference, Bill de Blasio has spent the final months of his mayoralty seemingly in a mode of ingratiation. The most surprising of these overtures came in September when he put on a dark blue velvet paisley embossed tuxedo jacket from Dreu Beckemberg and went to the Met Gala, for the first time, after years of positioning himself above the haughtiness of it all. “Let’s make it real simple,” he said in a television interview two years ago, “it’s just not my thing.” But here it was, 2021, and the mayor turned up and didn’t even seem to hate it.

He hadn’t relaxed enough to suggest he might be going simply for the fun of it — this was on behalf of the city’s recovery. The pandemic had brought profound economic reversals. Last year, cuts to the New York City Department of Parks and Recreation’s budget were met with rancor, given what a salvation the outdoors had been for New Yorkers during the most brutal phase of the pandemic. But just a few weeks ago, Mr. de Blasio announced a $40 million commitment for a restoration project in Prospect Park, the single largest ever allocation to the park’s fund-raising arm.

This spring — long after criticism that he had been slow-footed in handling the horrors of the city’s jail system — he appointed a progressive corrections commissioner, however late into his tenure. And for the real-estate class, the spigot of largess produced one of the biggest gifts of all, the passage of a plan to radically rezone SoHo, keeping the mistress contented as well.

Could any of it possibly matter? Almost nothing has distinguished Bill de Blasio’s eight-year reign at City Hall as much as the distaste New Yorkers have maintained for him, often in spite of a quiet, begrudging appreciation of his policymaking. That he gave no indication of caring — to the contrary, he seemed to take pride in his lack of likability — only escalated the tension because it proved such an affront to our self-importance. Among the burgher class in brownstone Brooklyn, which helped catapult him to victory in the first place, the animosity was both vague and visceral: He was arrogant; he was earnest; he was late; he was boring; he was too progressive; he was a traitor to progressivism; he drove 11 miles to a gym in Park Slope. The gym was famously a YMCA, though at times it seemed as if Democrats would have been made less insane by a choice to go to a $300-an-hour East Side trainer.

The de Blasio and McCray family mixes it up with rappers Cordae Dunston, left, and Megan Thee Stallion, right, at the 2021 Met Gala.Credit…Landon Nordeman for The New York Times

History is likely to regard the de Blasio legacy through the narrower aperture of his achievements, but current dispensers of judgment are caught in the broader and more immediate grip of his affect. There are few more powerful indicators of just how problematic his style has been than an October Sienna College poll in which respondents were asked to choose among five potential Democratic candidates for governor and picked Andrew M. Cuomo — two months after he had resigned amid a barrage of sexual harassment allegations — over Bill de Blasio, nearly three to one. (Gov. Kathy Hochul led the field.)

There is no doubt that Mr. de Blasio has been an equal-opportunity alienator. In 2015, during the second year of his first term, as his approval ratings were falling, he managed to turn off the Harlem clerical establishment and the event publicist Peggy Siegal over the course of a few days. Ms. Siegal had complained to The Wall Street Journal that Mr. de Blasio “had disdain for the striving successful New Yorkers.” It was still two years before the mayor would even visit the High Line in Chelsea, the creation of which had been an initiative of the downtown elite.

As Mayor Bill de Blasio prepares to leave office, we look back at his performance on some key issues.

Six years ago, the Rev. Calvin O. Butts III convened Black leaders to talk about what they believed was the mayor’s waning enthusiasm for police reform. Mr. de Blasio had come to office with a great deal of support from Black voters, but as the reverend put it then, he demonstrated such confidence in that backing that he behaved as if he didn’t need “the clergy, the ministers.” Defying the first rule of love and politics, he couldn’t make people feel as if they really mattered.

Despite capturing the Black vote in two election cycles, by the time of the George Floyd protests last year, affections appeared to be in decline. Showing up at a memorial in Cadman Plaza in Brooklyn, Mr. de Blasio was booed. (Recently, a friend suggested that I Google “de Blasio” and “booed,’” and it was this way that I learned that he was also heckled this past summer at the Nathan’s Famous hot dog-eating contest in Coney Island, where he was wearing a hat shaped like a frankfurter.)

It is not as if New Yorkers cannot abide difficult personalities in their political lives — complexity and offensiveness are expected, even sought after. Consider that early in 1981, one of the most violent years in the city’s modern era, when mass transit was in shambles and filth was pervasive, Mayor Ed I. Koch, arguably the most ornery leader the city has ever had, held an approval rating of 62 percent, making him one of the most popular politicians in the country. In Mr. de Blasio’s case, the bothersome aspects of his disposition exist outside the parameters of any collective tolerance — he ran cool rather than hot; he was imperious more than he was righteously enraged. These deficiencies made it hard for him to advance in his epic fights with Mr. Cuomo, who was engaged in a persistent project of emasculating him.

With his own employees, however, Mr. de Blasio seemed all too comfortable in his authority. In a new memoir about her life in government and politics, Karen Hinton, a former press secretary for the mayor, writes that his “signature move at City Hall was to dig in on an untenable position, against the advice of his staff, slowly raising the cost of an inevitable defeat.” Women who worked for him felt especially marginalized, she added, in discussions that were “marked by condescension,” which in her view then had the noxious effect of encouraging other men to behave the same way.

Bill de Blasio with his then press secretary, Karen Hinton, who wrote in her memoir about how many women who worked for the mayor felt marginalized.Credit…Bryan R. Smith for The New York Times

By the spring of 2017, of the 31 high-level officials who had left City Hall since Mr. de Blasio took office three years earlier, 22 were women. Four years ago, in interviews with the Times, when asked why they left, they talked about the mayor’s management style and lecturing personality.

Ms. Hinton, who resigned in 2016, had known Mr. de Blasio for a long time when they both served under Mr. Cuomo during his time running the United States Department of Housing and Urban Development. “I remember Bill being so friendly and funny. When he would come to Washington to have meetings with Andrew or do other stuff, he was always a delight to see in the building,” she said. “I enjoyed being around him and talking to him and I still did until I went to work for him.”

What happened next might be left for a biographer to sort out, but Mr. de Blasio surely saw in his unlikely 2013 primary win — which had been predicted to go to Christine Quinn in all her brash charm — the beginnings of an invincible political future. Who needed the press or Wall Street or underlings or any of the city’s traditional pillars when he had his convictions to prop him up? Who better to understand how far Bill de Blasio could go than Bill de Blasio? Now it seems that he is determined to run for governor, even if he might be better suited to take the lead of Al Gore and pursue a meaningful life outside of politics, where the matter of who wants to have a Sierra Nevada with you matters a lot less.

For now, at least, the mayor apparently expects that everyone will be happy to belly up to the bar.

Tags
Had Off That Time Who

Will the Czech Republic boycott the Beijing Winter Olympics?