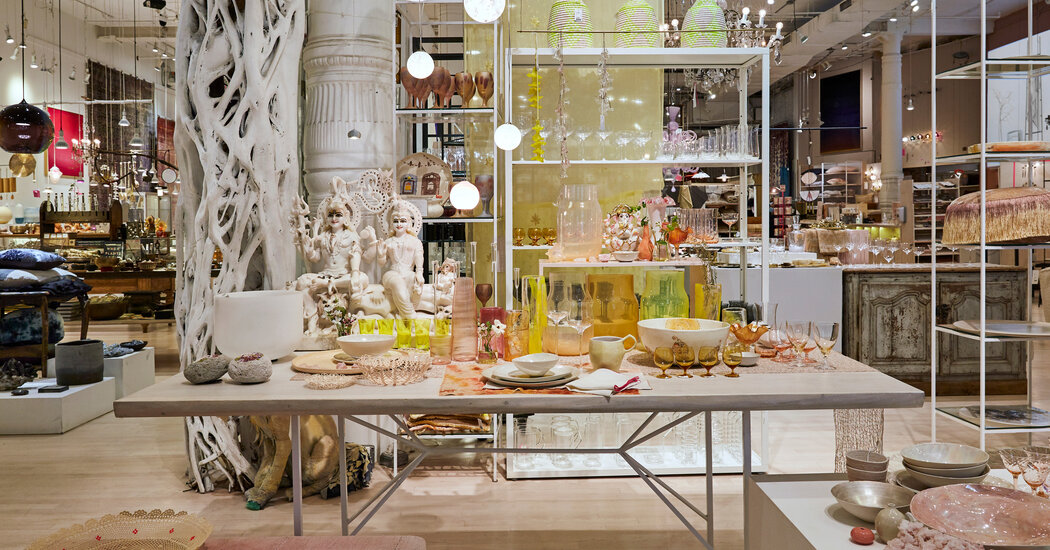 In this series for T, the author Reggie Nadelson revisits New York institutions that have defined cool for decades, from time-honored restaurants to unsung dives.

On a warm day in late September, rosy apples piled high in the Union Square Greenmarket, I stroll over to ABC Carpet & Home on the corner of Broadway and 19th Street. A gold-luster plate calls to me from a window, as does a pale pink mohair throw. The grand loft building, constructed in 1882, has just been renovated — it was bought from ABC by a realty company in 2017, though the store still occupies three of the eight floors — and in an age when the great New York department stores are disappearing, I’m happy to see that ABC is very much alive. The sun glints off the red brick and cast-iron facade, picking out the details on the terra-cotta capitals: carved birds, monsters, angels and cherubs. In the recessed entryway, supported by a single enormous column, a couple of women wait excitedly for opening time. 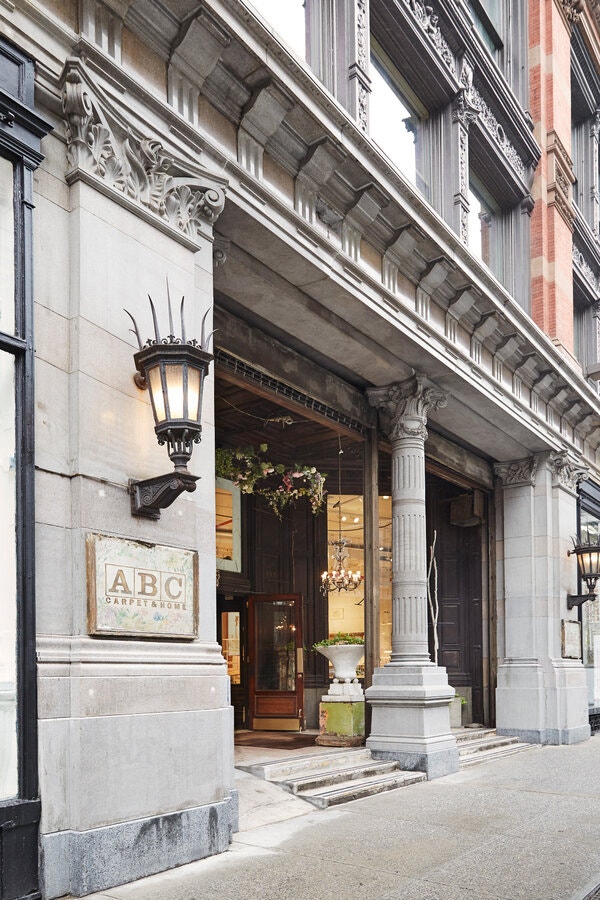 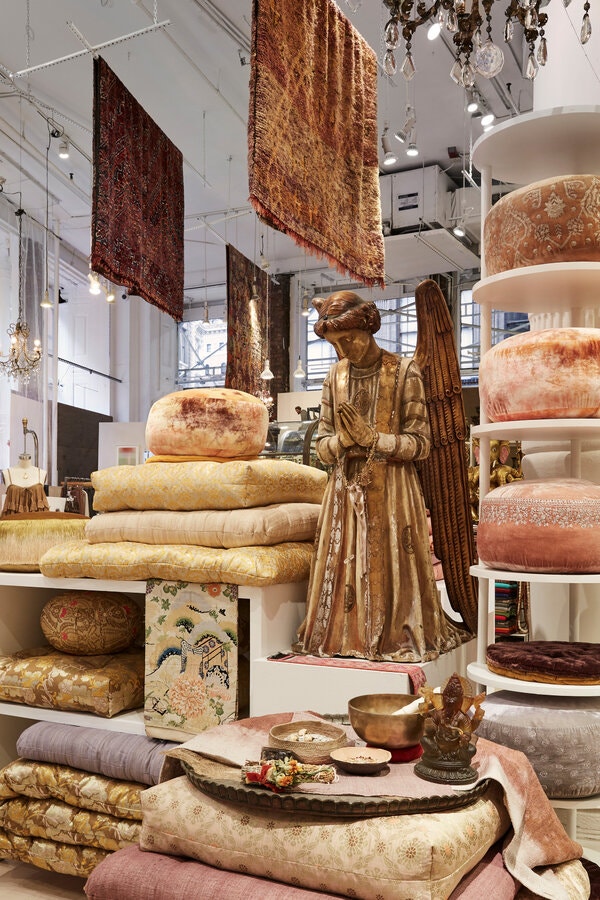 As ever, the immense street-level windows — filled with beguilingarrangements of rugs, furniture and antique tchotchkes from Morocco, India and China, as well as ancient-seeming draperies that evoke Miss Havisham’s parlor — appear to be the work of a fantastical theater setdesigner. But if the displays call to mind flea markets in faraway places, the store itself has always been a New York event. Tourists arrive in throngs,and rumors have long circulated about rich and famous— and infamous — shoppers. A friend told me that she saw Donald Trump and Marla Maples browsing for baby furniture here once upon a time.

The ground floor, especially, conjures thethrill of the bazaar and, with it, an obsessive desire to collect. Here’s a rose pink pillow embroidered with dark green trees, there’s a fuchsia stone teacup; here’s a vintage crystal chandelier adorned with glass grapes and there’s an array of deliciously pretty drop earrings. Upstairs are heaps of rugs — kilims, dhurries, Persians — in thousands of otherworldly colors and, of course, furniture: vivid pink plush swivel chairs, deep leather sofas and bergères upholstered in floral satin. After all the time I’ve spent on my couch during the lockdown, I could use — in my dreams, at least — a plump yellow velvet sofa. 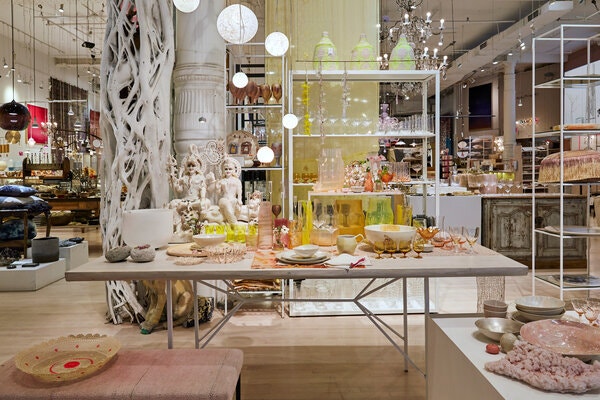 ABC has always been part of my life. In the 1950s and ’60s, my mother would go to the original shop, ABC Carpet, which was across the street at 881 Broadway, to buy broadloom. Later, in 1985, when the store became ABC Carpet & Home and moved to number 888, like many New Yorkers I went for the excitement. This was shopping as experience, a place where furnishings were art objects, in much the same way that Dean & DeLuca, founded in SoHo in 1977, was a museum of food. There were always party poopers who thought ABC was wildly overpriced and full of things you didn’t need, but it was never about need; like so much in New York, it was about desire. When I finally made up my mind that I should buy a rug — after having livedin my apartment for nearly two decades — I found it at ABC. “Get the hot pink,” said Steven Wagner, a friend who was then one of the shop’s design consultants. “It will make you smile every morning.” He was right.

“In a black-and-white world, ABC is in color,” says Paulette Cole, the store’s owner, when I chat with her over Zoom a few days after my visit last month. (Her favorite hue, as it happens, is pink.) It was Cole who made ABC one of the most fabulous department stores in town, continuing astory that is a paradigm of the character that the city has always housed and inspired. At the end of the 19th century, Cole’s great-grandfather, Sam Weinrib, a Jewish immigrant from Austria, peddled used carpets from a pushcart on the Lower East Side. Later, his son, Max, opened a small store under the old Third Avenue El at 29th Street. And in 1947, Max and his son Jerry opened ABC Carpet at 881 Broadway, another stupendous loft building, this one dating to 1896, when the area was part of Ladies’ Mile, then the most prestigious shopping area in the city. In the late ’40s, wall-to-wall broadloom was a necessity for every aspirant middle-class family, and at ABC Carpet you could get it at a discount. When the business exploded, Max leased a couple of floors at 888 and eventually bought the entire building. To fill all eight stories, he began selling furniture. 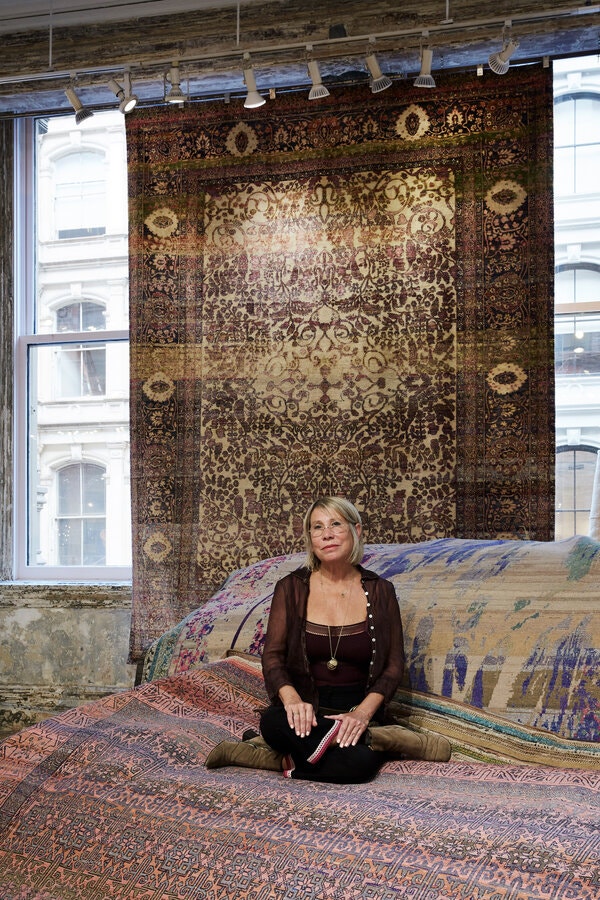 Unlike some other retailers of the same generation, the Weinribs managed to keep the business in the family. In the late ’70s, Jerry’s daughter Paulette skipped college to work in fashion design, but when she wanted to go back to school, her father asked her to give ABC a try and she agreed. It was in her blood. At the start of the next decade, she and her partner, Evan Cole, created what would become ABC Carpet & Home. “I called it the first loft retail business,” Paulette says of their concept. “I saw the world through a different lens to my forebears.”

When she was still in her 20s, Paulette captured the mid-80s zeitgeist just as we, the baby boomers, were settling down. The idea of “loft living” — pioneered by artists who squatted in the enormous raw spaces of SoHo’s former industrial buildings in the ’60s and ’70s, and later co-opted by realtors as a byword for cool — had taken hold, along with new ideas about how to decorate a home. We wanted a certain bourgeois comfort, so long as it didn’t resemble our parents’ or appear too bougie. We rejected wall-to-wall carpet in favor of bare wood floors accented with maybe a Moroccan prayer mat, Turkish rug or simple square of sisal. We had traveled and yearned for open kitchens, natural fibers and handmade fabrics from Indonesia, South America, New Mexico and the South of France. 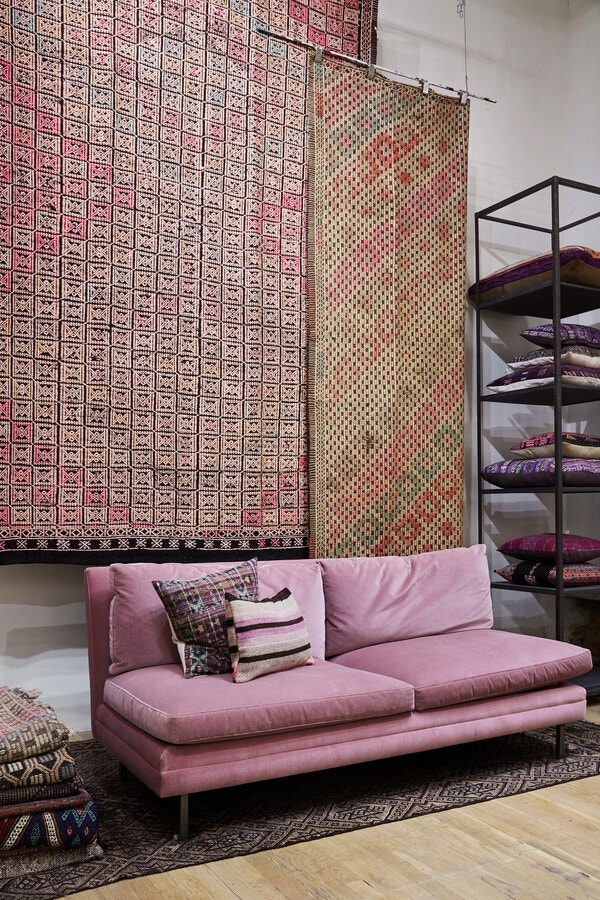 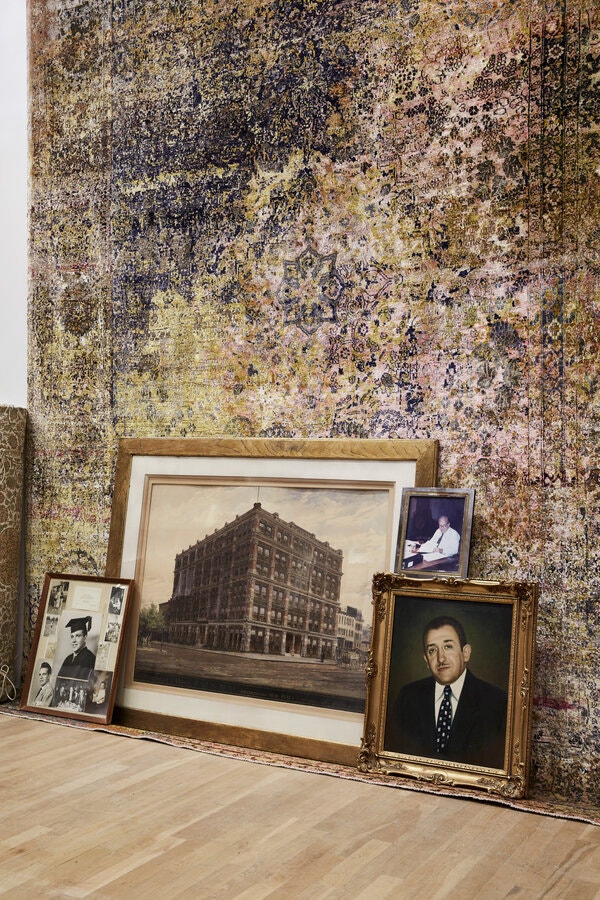 But while we aspired to a free-spirited post-hippie ethos, we also sought instruction in how to arrange a space in a convincingly intuitive way. Magazines like Metropolitan Home taught us how to prop a mirror against a wall, say, rather than hanging it, or to put only one kind of fruit — bright yellow lemons, green apples — in a roughly sculpted pottery bowl. Instead of sex, drugs and rock ’n’ roll, we went in for yoga, meditation and Santa Fe style. And ABC Carpet & Home was there for us. As Sally Roy, a New York film producer, remembers, “You could buy dining room chairs that didn’t match!” When Paulette began selling raw pine furniture at the store in the early ’80s, her father called her an alchemist, she recalls: “He said, ‘You turn junk into gold.’”

Interior design as narrative has always been the spine of ABC Carpet & Home. “We collect, not decorate,” says Paulette. “Our home is us, and our spirit is inside.” By 1994, the store had 350,000 square feet of retail space and had cultivated relationships with craftspeople and designers around the world. It sold midcentury furniture by Herman Miller and then-radical-seeming pieces by the Italian designer Ettore Sottsass. Ralph Lauren had a showroom on the fifth floor. The Coles added electronics, kitchenware, books and organic bedding. The all-encompassing approach reminded me of what the British designer Terence Conran had done decades earlier in London with his signature store Habitat, whose very name told you it was a way of life. 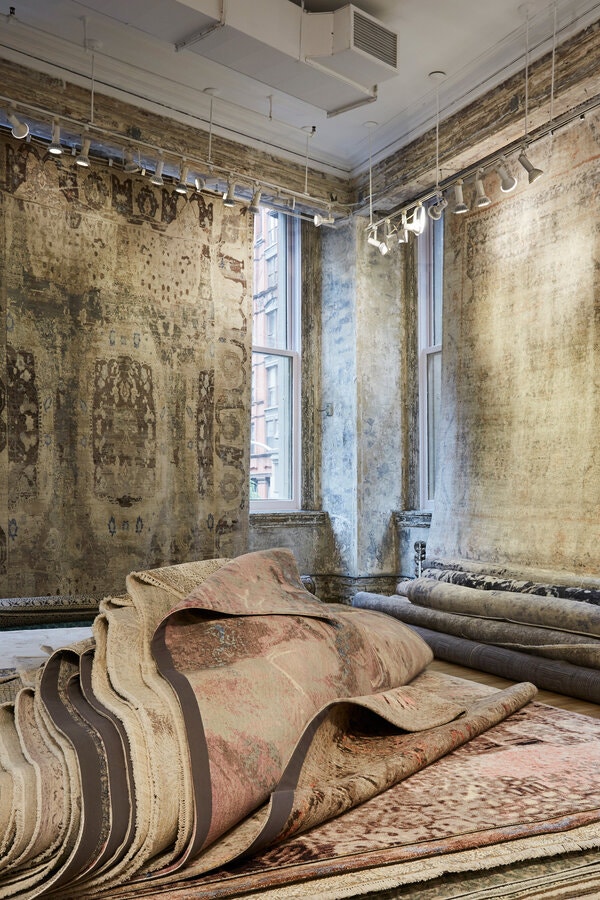 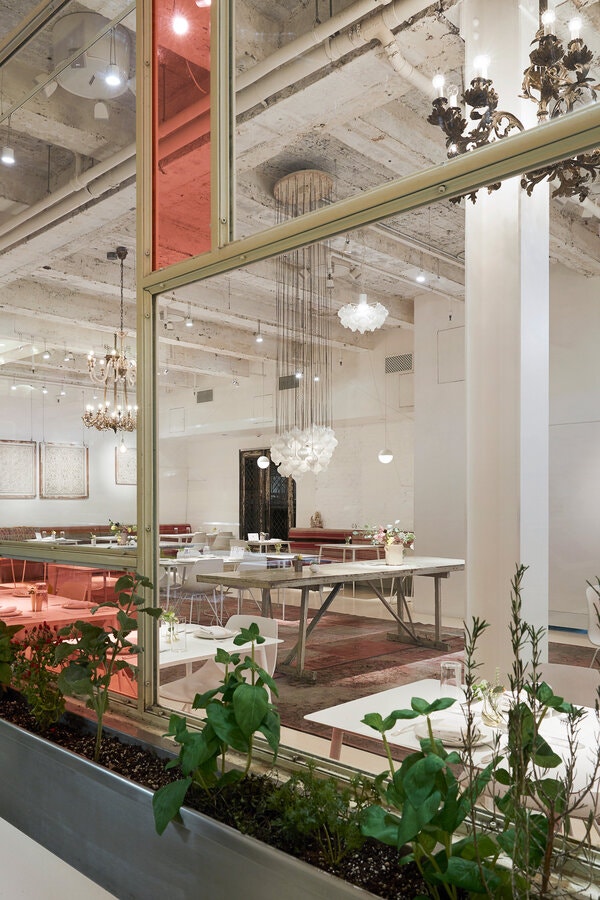 ABC opened more shops — on Long Island, in Delray Beach and even at Harrods in London — but Paulette’s interests were changing. She’d begun to tap further into her spiritual side, and so the store started hosting classes by visiting teachers such as Deepak Chopra. Employees were encouraged to meditate. Meanwhile, the retail world was transitioning to focus on digital marketing, and ABC fell out of step, as Cole and her new C.E.O., Aaron Rose, who came to the store from J. Crew last year, admit. Their aim now is to gear up in this area, making the shop more accessible while retaining its essence.Paulette has always adapted to the moment andbelieves that, like a home, the store will never really be finished.

Later, still yearning for that gold-luster plate, I recall that Paulette told me she had been influenced in the 1980s by the Chelsea Passage department at Barneys, where the store sold exquisite tablewares and home goods such as cashmere blankets. In many ways, I’ve always thought of Barneys as the fashion counterpart to ABC. It, too, was founded — in 1923 as a discount men’s wear shop — by a Jewish immigrant. The same family expanded it over more than nine decades, and it became very big and opened in other cities. Then, last year, either because of this growth or because it could not compete with online shopping, Barneys closed and New York lost a beloved institution. And so I’m glad ABC is still going. In a city whose retail landscape is increasingly made up of chain stores, and which has recently suffered badly from the effects of the pandemic, ABC remains a little piece of New York’s old glamour — and its soul.

Tags
Abc Had New York She Who

Palestinian Leaders Are Banking on Biden Win Next Week