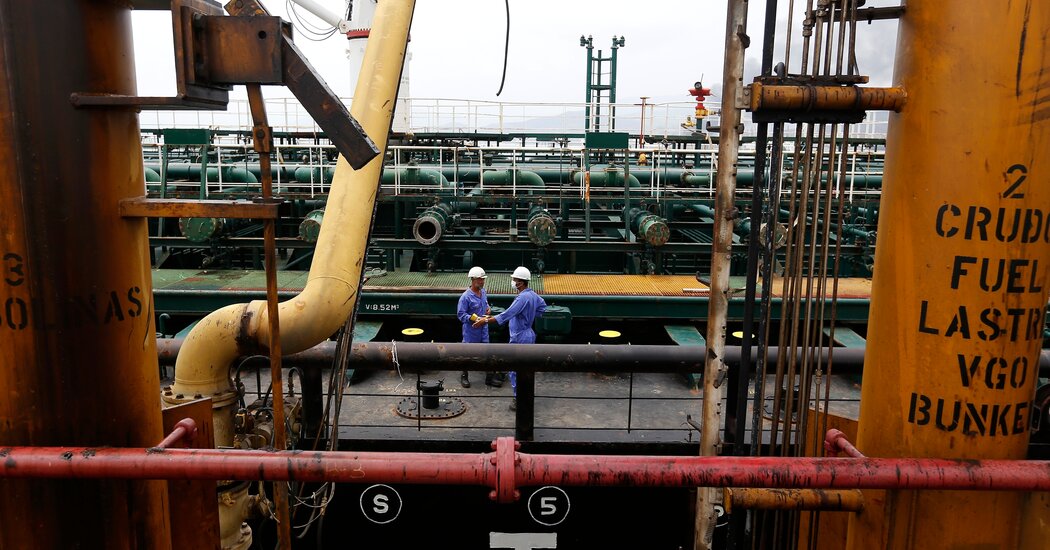 WASHINGTON — The Trump administration imposed sweeping economic sanctions against Iran’s oil sector on Monday as tensions between Washington and Tehran continue to escalate in the days leading up to the American presidential election.

The Treasury Department announced sanctions on Iran’s Ministry of Petroleum, the National Iranian Oil Company and its oil-tanker subsidiary for providing financial support to Iran’s Islamic Revolutionary Guards Corps, the elite military unit that is designated as a terrorist group by the United States. The sanctions are expected to create a new obstacle should any future president seek to open negotiations with Iran.

Treasury Secretary Steven T. Mnuchin said the Iranian government “uses the petroleum sector to fund the destabilizing activities” of the Revolutionary Guards Corps, adding that Iranian leaders continue “to prioritize its support for terrorist entities and its nuclear program over the needs of the Iranian people.”

A spokesman for Iran’s mission to the United Nations denounced the sanctions.

“The U.S.’s hostility towards the Iranian people has no limit,” said the spokesman, Alireza Miryousefi. “The U.S. is sanctioning Iranian entities that have already been sanctioned under another phony charge. However, the U.S.’s addiction to sanctions has not paid off.”

Former Vice President Joseph R. Biden Jr., the Democratic presidential candidate, has promised that if elected he will discuss re-entering the landmark 2015 nuclear agreement with Iran that Mr. Trump withdrew from in 2018.

That negotiating process could require unwinding a series of sanctions that Mr. Trump has levied on Iran. But given the number of actions Mr. Trump has enacted, it could become difficult for Mr. Biden to undo them.

“It makes it more politically perilous for Biden,” said Brian O’Toole, a former senior adviser at the Treasury Department’s Office of Foreign Assets Control. “Essentially, ‘the U.S. is giving up a lot more than Iran is giving up’ is how it will be pitched by the Republicans.”

The Treasury Department’s actions put nearly all of Iran’s petroleum sector under sanctions authorized by counterterrorism provisions enacted after the Sept. 11, 2001, attacks, which experts said carried a political and symbolic weight.

“A future President Biden would have a tough time lifting these sanctions given the inextricable link of the energy sector to terrorism and the I.R.G.C.,” said Mark Dubowitz, the chief executive of the Foundation for Defense of Democracies, a think tank whose analysis has taken a hard stance against Iran, referring to the Revolutionary Guards. “International companies will have an enormously difficult time investing in Iran’s energy sector or even buying oil from Iran without running afoul of these sanctions.”

In recent months, Mr. Trump has increased economic pressure against Iran, including reimposing sanctions against the country and enforcing penalties on companies that do business with Tehran.

Earlier this month, the Treasury Department imposed sanctions on 18 Iranian banks, effectively locking Iran out of the global financial system and further damaging its collapsing economy.

The Trump administration last month also unilaterally restored international economic penalties on Tehran that much of the rest of the world has refused to enforce. It has said it was reimposing U.N. sanctions against Iran over the fierce objection of American allies, in part to keep a global arms embargo in place beyond its expiration date of Oct. 18.

In response to Monday’s actions, Mr. Zanganeh tweeted, “Sanctioning me and my colleagues is a reaction to Washington’s failed policy of reducing oil exports to zero.” Mr. Zanganeh added that he had no financial belongings outside Iran to be subjected to sanctions. Mr. Zarif also tweeted that “more economic war with Iran will bring the U.S. less influence, not more.”

Iranian energy and economic experts said that the country had figured out how to skirt sanctions and was able to export about 300,000 to 400,000 barrels of oil a day, mostly to China and Syria, a reduction from 2.5 million barrels in 2018.

“They are making it difficult both for Iran and for Biden to get out of this quagmire,” said Meysam Sharifi, an oil trader in Tehran. “It seems Trump thinks he may lose and is rushing to tighten the noose on Iran and on Biden’s diplomacy.”

Sanctions have created severe shortages in Iran of crucial medicine such as insulin and flu vaccine because companies importing them are finding it nearly impossible to pay because of restrictions on banking transactions. In the past few weeks, cooking oil and butter have disappeared from grocery shelves.

Zeta Turns Into Hurricane and Threatens to Dump Torrential Rains