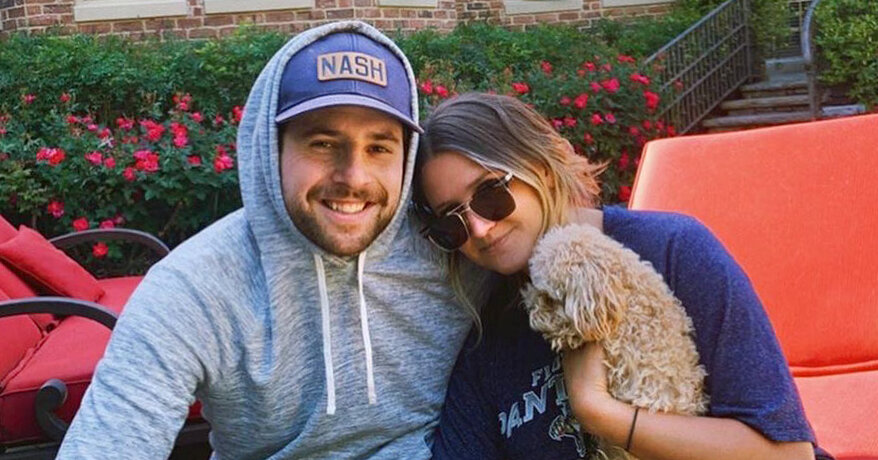 It started with a yoga class, a stroll through a secondhand bookstore in Berkeley, Calif., and a rapidly accelerating pandemic. After just eight dates — just over a month after they met — Scott Lucas, a deputy editor at BuzzFeed News, and Lyz Keating, a public health professional, decided to move in together.

They went to Target, purchased a large coffee maker and stocked up on laundry detergent. For the next six months, they split time between their two apartments. “A couple weeks into it, we kind of looked up and were like, ‘We’re living together?’” said Ms. Keating, 34.

Today, the couple shares a one-bedroom in Oakland, Calif., with Ms. Keating’s dog and a newly adopted kitten.

“It was a big decision, and in some ways, the big decisions are easy decisions,” said Mr. Lucas, also 34. (Mr. Lucas and Ms. Keating recently purchased an engagement ring.)

Whirlwind domestic bliss hasn’t been the case for everyone this year. Life has been tough. A new Pew Research Center survey found that 1 in 4 American adults are struggling to pay their bills. Guides on how to survive cohabiting in close quarters with romantic partners (and parents, and kids) proliferate online. Divorce rates skyrocketed in China in March after couples emerged from lockdown.

But some relationships, confined to tight quarters, have had room to bloom. 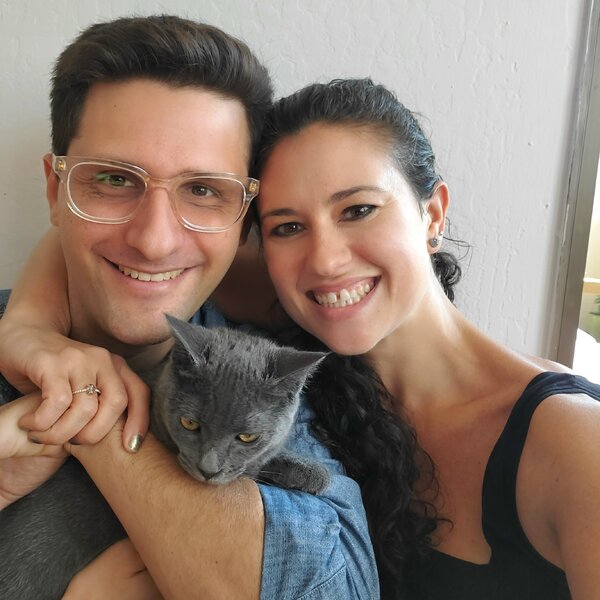 Happily ever after … for now

Sarah Corley, a 33-year-old digital marketer, and Adam Emma, a 33-year-old project architect, went on five dates before Chicago issued a stay-at-home order. They decided to trade off extended weekends at each other’s places until lockdown lifted.

“It was kind of an incubator for this beautiful thing we had started to develop,” Ms. Corley said, referring to the “safe haven” she and Mr. Emma built for themselves. “We got to know each other very deeply, very quickly.”

Shelley Sather, 46, was used to an independent lifestyle, living alone since she was 19. But that changed when she met her boyfriend at an ethnography conference in Rhode Island last November. The two learned they lived 11 minutes from each other in Brooklyn.

The first time they sat down for dinner, it was clear there was a spark. “We fell in love immediately,” said Ms. Sather.

Even with their busy schedules — Ms. Sather travels frequently for work and her boyfriend is a widowed father of two — they spent as much time together as possible. But in mid March, when New York shut down, they were afraid they wouldn’t be able to see each other at all.

“So he said, ‘I sat my kids down. I told them that I’m in love with you and we would all like to invite you to shelter in place with us,’” said Ms. Sather, who had only met his children, ages 15 and 11, twice. (She said she’s still “blown away” by his words.)

Ms. Sather left her apartment behind to join the family, who quarantined in both New Orleans and Fire Island. Now, all of them are settled back in Brooklyn and are renovating a home together.

Ms. Sather said it was “never my goal to have a house, a dog and family,” but that she’s never felt “more whole and more cared for” in her life. 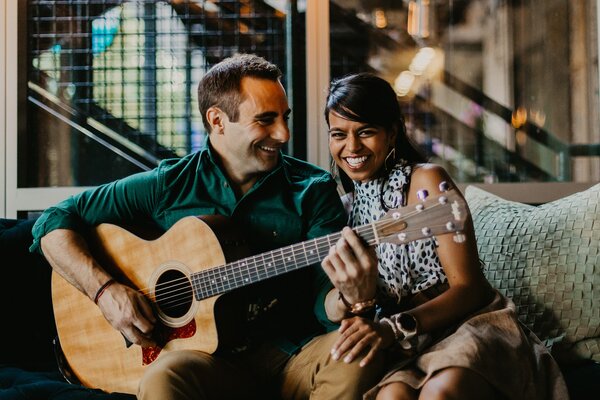 Sheltering in place … with parents

“With any normal guy you would think, ‘Oh my God, this is a nightmare situation for them,’” said Sarah Berkman, 27, a digital strategist who lives in Brooklyn. She found herself sheltering in place with her long-distance boyfriend of two months — at her parents’ house.

She had planned a trip on March 12 to visit Phillip Dinner, 27, in Nashville, where he had recently relocated for a job in finance and where she grew up. Then she never left.

Instead of Ms. Berkman going back and forth between her boyfriend’s home and her childhood home, they decided the safest plan was for everyone to stay together. To Ms. Berkman’s surprise, the unconventional setup worked well — so well, in fact, that Mr. Dinner would even eat meals or hang out with Ms. Berkman’s parents by himself.

“There was tons of alone time with her parents and at first it was nerve racking,” said Mr. Dinner. “What am going to talk about at the dinner table with them? But it got better and I got more comfortable.”

“I was very stressed with work through a lot of it, like crying all the time,” said Ms. Berkman. “Phillip had to deal with that and also being around my parents.” Eventually the couple has since moved out; they’re currently living at Mr. Dinner’s new house, only five minutes away. 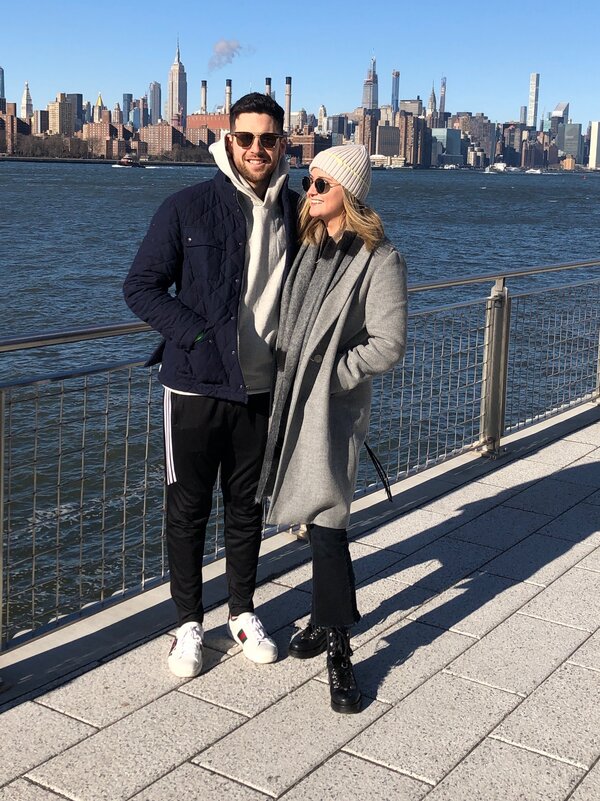 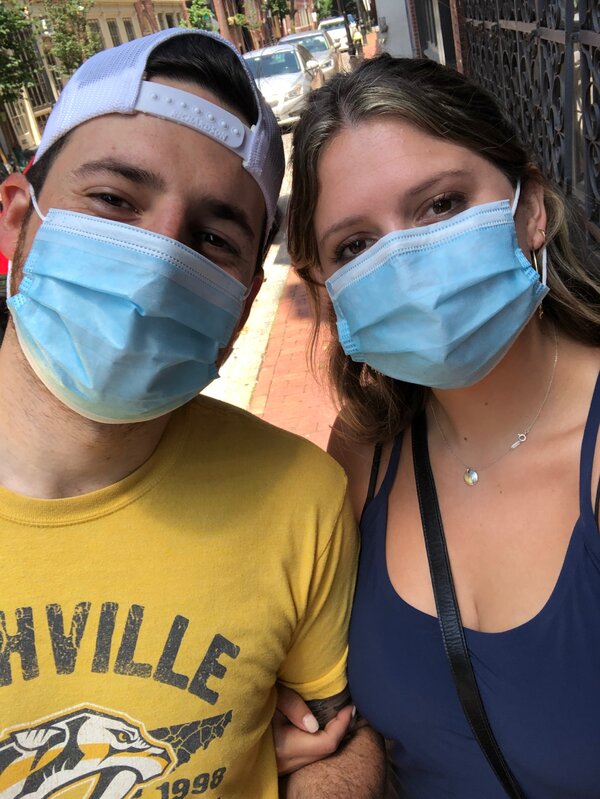 Love … and other stressors

“When you date anyone, you learn something new about them every day, whether that be good, bad, interesting, frustrating,” said Courtney Rada, 29, a Food Network host.

She rented a car in mid-March with her girlfriend, Emily Trumble, a 26-year-old actor, and drove from New York City to Sarasota, Fla., where they hunkered down in Ms. Rada’s grandparents’ winter home. A planned two-week trip turned into four months. She observed that when you’re constantly with that person — and only that person — emotions can easily heightened.

“Everything seems like a huge deal,” she said. “But if anything, it made me fall in love with her faster because I got a CliffsNotes version of every aspect of her.”

“And vice versa,” said Ms. Trumble, who said that, after living alone in New York, it was tough to learn to ask for space “without it being an insult.” The couple is now back in New York where they plan to move in together in January.

With restaurants closed and plans to meet friends for double dates canceled, the two got creative with date nights.

“I sort of tricked out my grandparents’ backyard with some tiki torches, leis, and glassware,” Ms. Rada said. “I was proud of myself.” (“It was very, very impressive,” Ms. Trumble added.)

Obviously, not all new couples’s relationships survived this year.

Elly Belle, a 25-year-old journalist in Brooklyn,, met her girlfriend in February via Instagram. They were going on multiple dates per week but that changed as the pandemic started to worsen. Ms. Belle, who is immunocompromised, became not only increasingly stressed by the news but also from trying to figure out how to bring up such a fraught topic so early.

“I was under no illusion that it was going to be a short thing,” she said, which led to a “dramatic conversation with tears” about what their relationship would look like under this new normal. They decided to try quarantining together.

Ms. Belle and her girlfriend quarantined together for nearly four months, but eventually called it quits. It’s impossible to know how their relationship would have gone sans pandemic, but Ms. Belle believes it would have been easier under different living arrangements.

“At that point, it felt like being in a pressure cooker,” she said. 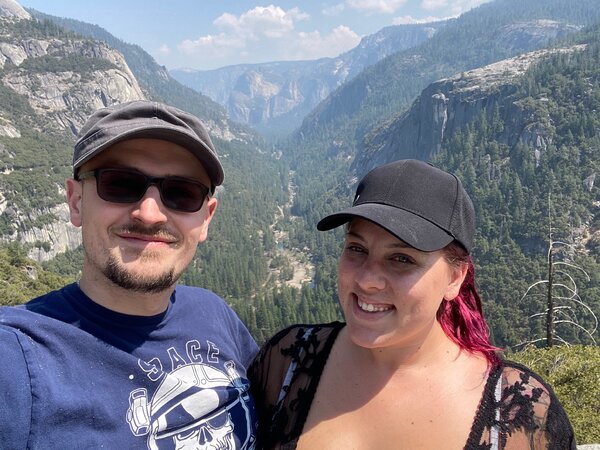 For Tianna Donyes, 28, the chaos of the outside world made her new relationship more comfortable and stable. Ms. Donyes, a hairstylist, went on her first date with her boyfriend, who builds props and sets for movies, on Feb. 26. Two weeks later, she packed a bag and headed to his house in the Sherman Oaks area of Los Angeles. She’s been there ever since.

“We’re just two people who don’t have a lot of family around,” she said. “In the midst of everything that’s going on right now, and so many people are miserable, we get to experience that feeling of being in your honeymoon phase and getting to live together at the same time. It feels like you’re getting away with something.”

Tags
New She They Who You