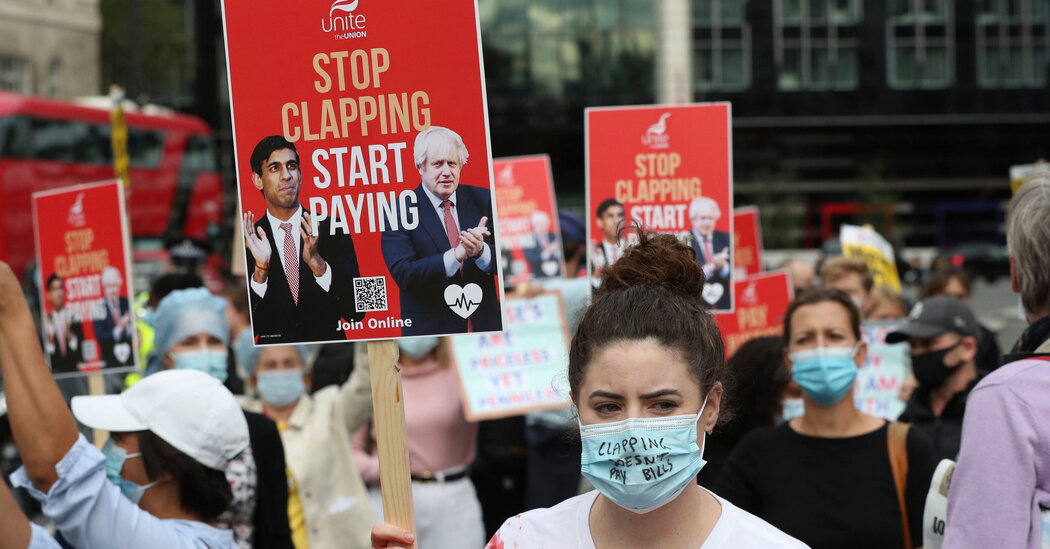 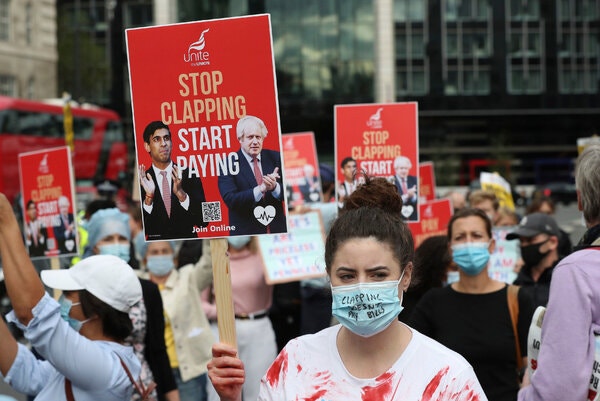 As Britain becomes subsumed by a second wave of coronavirus infections and deaths, its doctors and nurses are bracing for an expected deluge of new patients over the next six months, with no clear government strategy to contain the virus and deal with rapidly filling intensive care units.

As a result, morale among overstretched health workers is wilting. Hospitals have canceled nonessential operations and transferred patients to nearby facilities, a result of crowding caused in part by the government’s effort to restart elective procedures that were halted in the spring. Some emergency units are already telling patients who don’t need urgent care to stay away.

Quote: “We’ve been through it once before, and it wasn’t very nice, but there was an end to it,” said Dr. Alison Pittard, the dean of the Faculty of Intensive Care Medicine. “Whereas now, this is going to go on for much longer. We did not and do not have enough staff.”

In other coronavirus developments: 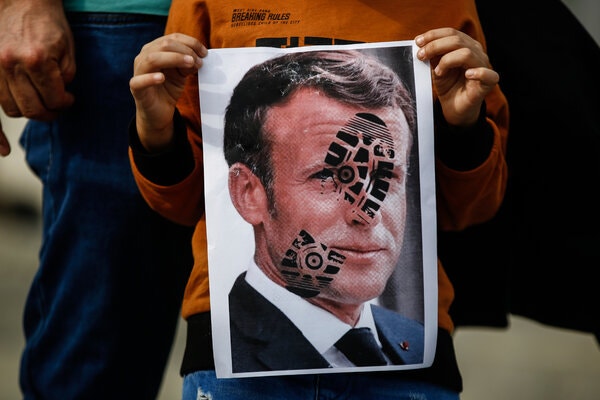 Protests against Macron in the Muslim world

Since a Muslim teenager beheaded Samuel Paty, the French schoolteacher who had shown caricatures of the Prophet Muhammad in class, France has conducted dozens of raids aimed at suspected Islamic extremists, closed a major mosque and shut down some Muslim aid groups.

Though widely popular at home, these actions, and the tone coming from top French officials, have opened France to criticism from the Muslim world that the nation’s complicated postcolonial relationship with its six million Muslim citizens has taken an ugly turn. Thousands demonstrated against France and its president, Emmanuel Macron, in Turkey and Bangladesh, while leaders in Kuwait and Pakistan spoke out against Mr. Macron.

Go deeper: For generations, French public schools assimilated immigrant children into society by instilling national ideals. But critics, many in the Muslim community, are now questioning whether France’s model of integration, including its schools, needs an update or an overhaul.

The push to assimilate risks engendering a form of xenophobia in the broader population, said Hakim El Karoui of the think tank Institut Montaigne: “The message is: ‘We don’t want your otherness because we want you to be like us.’” 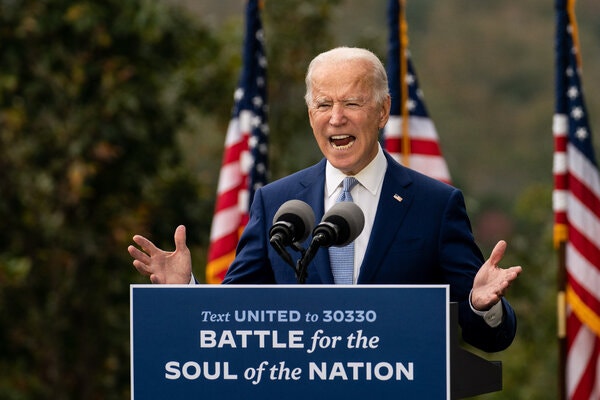 The final stretch to the U.S. election

More than 64 million Americans have already voted in the Nov. 3 presidential election — and about half of them are in the dozen or so competitive states that will ultimately decide who wins in the Electoral College. Early votes in these battleground states already account for more than half of those states’ total votes in 2016.

With a week to go until Election Day, former Vice President Joe Biden campaigned in Georgia, which Democrats have not carried in a presidential election since 1992, while President Trump held rallies in Wisconsin, Michigan and Nebraska.

Former President Barack Obama delivered a withering speech in Orlando, Fla., joking that his successor was “jealous of Covid’s media coverage.” Relishing the chance to strike back at Mr. Trump, Mr. Obama has been willing to throw punches on behalf of his former vice president.

If you have 7 minutes, this is worth it 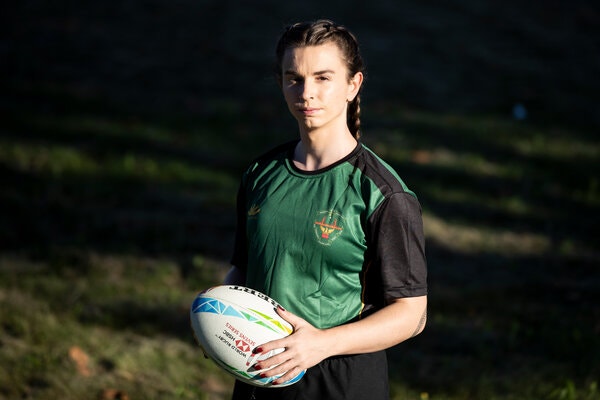 In a sport that had embraced athletes of different sizes, shapes, abilities and gender identities, transgender rugby players like Grace McKenzie, above, felt blindsided in recent months when word spread that World Rugby planned to exclude transgender women from women’s teams at top international events over safety concerns.

After nine months of review and deliberation, World Rugby said that in a collision sport where at least one injury typically occurs per match, “safety and fairness cannot presently be assured for women competing against trans women in contact rugby.”

Climate change: The Trump administrationis imposing new limits on the National Oceanic and Atmospheric Administration that would undercut action against global warming. It recently replaced the agency’s chief scientist.

Polish protests: Tens of thousands of Poles have defied Covid-19 restrictions to protest a new high court ruling that imposes a near-total ban on abortion, blocking major roads and bridges and chanting antigovernment slogans. Here’s what you need to know.

Pakistan: At least eight people were killed and more than 100 wounded when a powerful explosion ripped through an Islamic religious school in the suburbs of Peshawar. No group immediately claimed responsibility for the bombing. 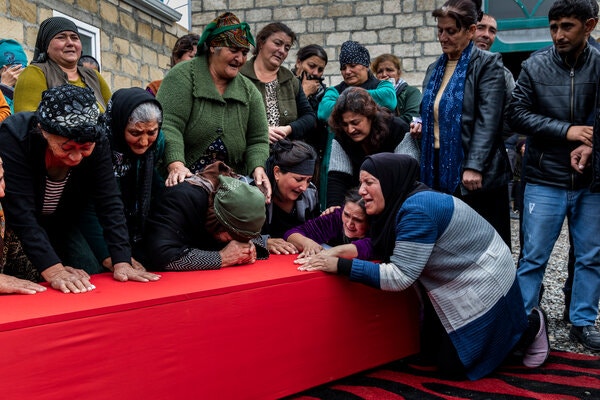 Snapshot: Family members wept over the coffin of Amar Isakli, above, a 23-year-old Azerbaijani soldier killed in a shelling near the frontline city of Terter. Casualties in the conflict with Armenia are already in the thousands.

Missing dolphin: Fungie, the bottlenose dolphin that helped transform the Irish village of Dingle from a small fishing and farming community into a global tourist destination, has vanished after 37 years. Two weeks after the last confirmed sighting, hope is diminishing.

What we’re reading: This excerpt in The New Yorker on U.S. health care reform from former President Barack Obama’s upcoming memoir. “There’s a lot of fascinating detail about American politics, but also some touching passages on fatherhood, the family dog and sailing,” writes Carole Landry of the Briefings team. 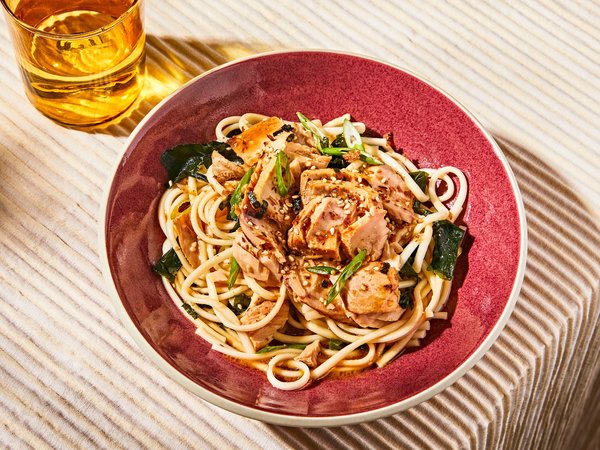 Cook: This Japanese-style tuna noodle salad is dressed in a sweet-salty vinaigrette of soy, sesame oil, mirin and rice vinegar.

Listen: These news podcasts for children are perfect for young people seeking a better understanding of what the adults are fussing about (and useful for their parents, too).

Do: Herbal teas can soothe and restore. Here’s a step-by-step guide to growing brew-friendly plants at home.

We’re delighted to share our At Home collection on what to read, cook, watch and do while staying safe at home.

Giving recipe creators their due

In June, when a national uproar over police brutality and systemic racism precipitated an examination of fairness and equity in many areas of life — including food media — NYT Cooking began the long overdue project of giving recipe creators, in addition to Times reporters and contributors, credit for their work.

But what might sound like a simple change took months to complete and much collaboration among editors, product managers and engineers, involving repeated checking and double-checking. Owen Dodd, a senior product designer, said the most challenging aspect of the project was the amount of data involved. “There were about 4,000 recipes that had some form of attribution,” he told Times Insider.

The effort was a reflection of the journalistic rigor that goes into developing and writing recipes for NYT Cooking, whether they’re adapted from another source or not. 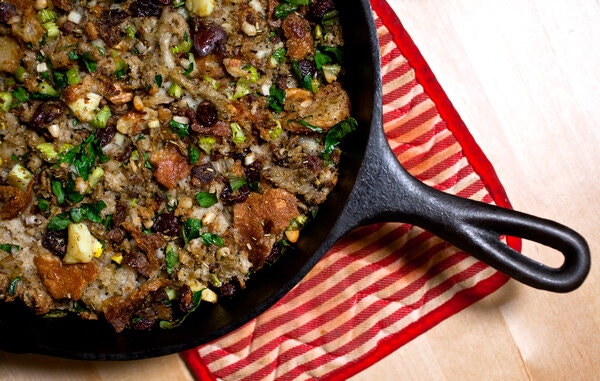 This change comes amid a broader conversation about racism in food media and food organizations. Bon Appétit’s top editor stepped down in June after a culturally insensitive photo of him resurfaced online, and the director of the Southern Foodways Alliance is facing calls to resign over his record on diversity.

“There are historic journalistic practices that need to be revisited or revised,” said Darun Kwak, a product manager for NYT Cooking.

Sam Sifton, the head of Cooking, said it was a matter of transparency: Even if a reporter has done a lot of work to make someone else’s recipe accessible for home cooks, it isn’t fair to run that recipe solely under the reporter’s byline.

“We’ve been talking a lot at a high level about issues of diversity, equity and inclusion on NYT Cooking, and indeed at The Times,” Mr. Sifton said. “The question of recipe ownership, I think, is one that fits directly into conversations that we’ve been having about equity.”

Today’s Back Story has been excerpted from this Times Insider article.

Thank you
To Theodore Kim and Jahaan Singh for the break from the news. You can reach the team at [email protected]

P.S.
• We’re listening to “The Daily.” Our latest episode is about what we learned from the last contested U.S. presidential election.
• Here’s our Mini Crossword, and a clue: “Top part of a mushroom” (three letters). You can find all our puzzles here.
• The word “woku” — an Indonesian spice mixture — first appeared in The Times on Tuesday, according to the Twitter bot @NYT_first_said.
• Carolyn Ryan, a leader of The Times’s Diversity, Equity and Inclusion initiative, has been promoted to deputy managing editor.

Tags
Can New President Trans You